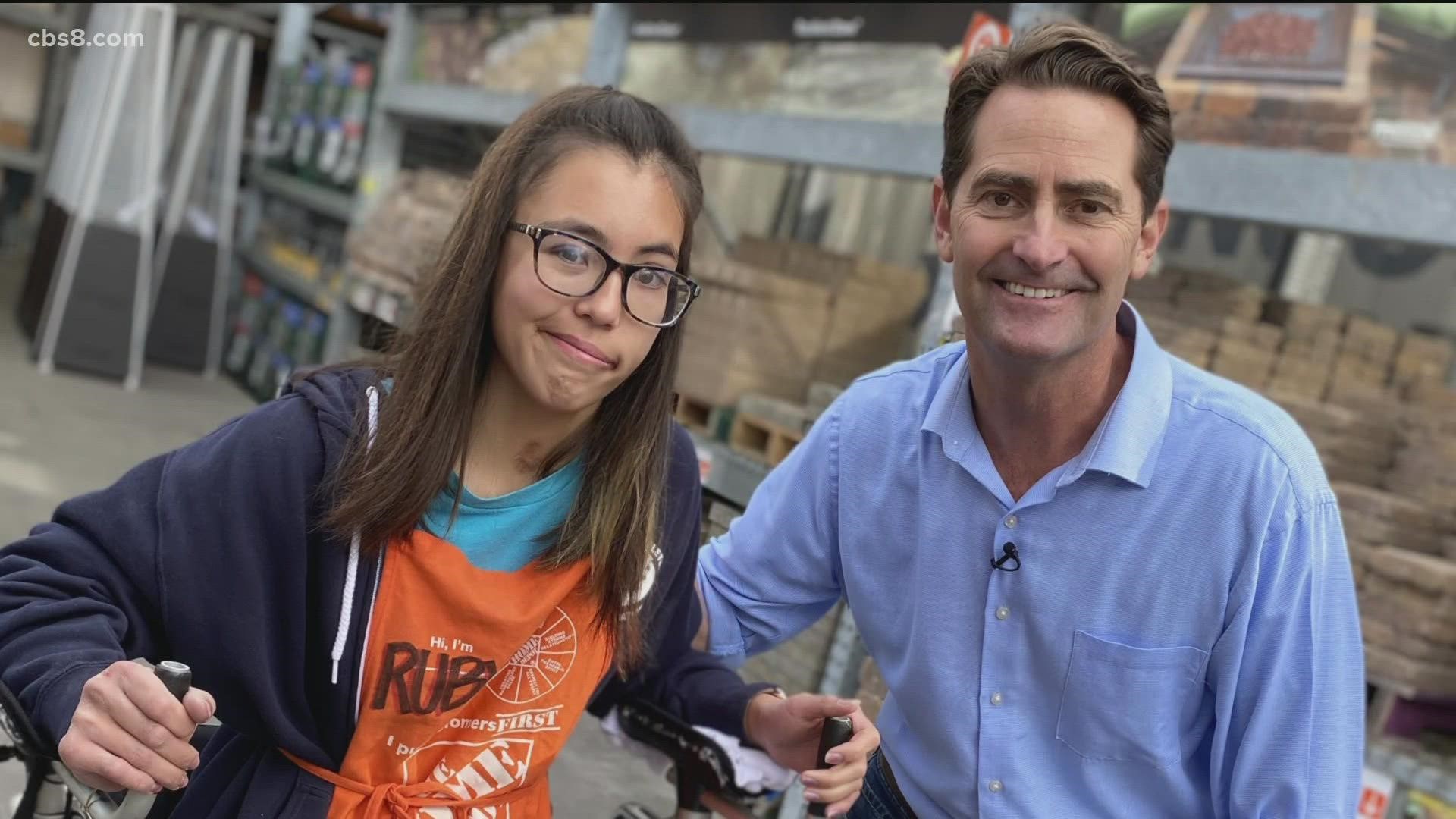 SAN DIEGO — Sometimes in life, it takes an act of kindness to help a person in need. In this Zevely Zone, I went to Mira Mesa to share the message of a courageous teenager. Ruby Melchoir was healthy one day and fighting for her life the next. In 2017, Ruby suffered a spontaneous brain hemorrhage. At the time, Ruby was a 16-year-old junior at Scripps Ranch High School.

Her parents, Paul and Robin, say their daughter complained about a headache. "She went from asking for a Tylenol to not being to walk. We rushed her to the emergency room," said Paul Melchoir. After a long stay in the intensive care unit, Ruby worked hard to regain some of her physical independence. Ruby had to learn how to talk again, how to eat again, and how to write again.

"I just keep trying. It doesn't matter what people think about you. The only thing that matters is believing in yourself." said Ruby.  She went from being an energetic, able-bodied teen to living in a wheelchair. Two years have passed since our original story.  Ruby is attending Miramar College and working at Home Depot. She is back on her feet with the assistance of a walker.

Home Depot allowed us to follow Ruby through her workday. "I love working with Ruby," said co-worker Fely Tolosa. "She's a fighter. She is awesome."

Ruby is 19-years old now and she says it's time for her to move out of her parents' home.  I asked her why she wants to get her own place? "Because everyone else is doing that and it is like how you move on," said Ruby.

More than a year ago, Ruby applied for Supplemental Security Income. Her family says she should easily qualify for the funding. She's been dealing with the Social Security Administration and a mountain of paperwork since mid-2021.

I asked Ruby how the application process was going. "It's not, it's not going, it just stopped," said Ruby.  Seems to me, if Ruby has the strength push her walker and a Home Depot shopping cart to do her job, the federal government can push some paper for a young woman in need. Ruby's family reached out to several members of Congress with no luck. What she needs is one big hearted San Diegan to provide legal services pro-bono and help her cut through the red tape.

"It's frustrating," said Ruby's father, Paul.  Despite the struggles, Paul and Ruby go adaptive surfing on Saturdays and that's not all.  Ruby showed me pictures of her adaptive skiing in Colorado. "That was the most fun ever," said Ruby.  She even hiked up to Potato Chip Rock on Mount Woodson. "That's incredible, how did you get up there?" I asked.  Ruby told me, " My wheelchair."

"I can't even put into words how proud I am of everything she's done," said Paul.  "She is just my favorite," I said.  Paul gave me a wink and said, "Yeah mine too."

There are so many generous people in San Diego.  Ruby is hoping someone can help her secure SSI so she can afford to live in her own home. "Yeah, if they could help advocate that would be awesome," said Ruby.

The greatest gift of all this holiday season, would be seeing Ruby spread her wings. "Oh my god yeah!" said Ruby.

A special thank you goes out to Home Depot for supporting Ruby.  I called their corporate office in Atlanta to ask for permission to shoot video in their store, they called me right back with approval.

If you or someone you know is willing to donate their legal skills to help Ruby receive the help she needs, please email me directly at jzevely@kfmb.com.  I will pass your information on to Ruby. Thank you, San Diego! 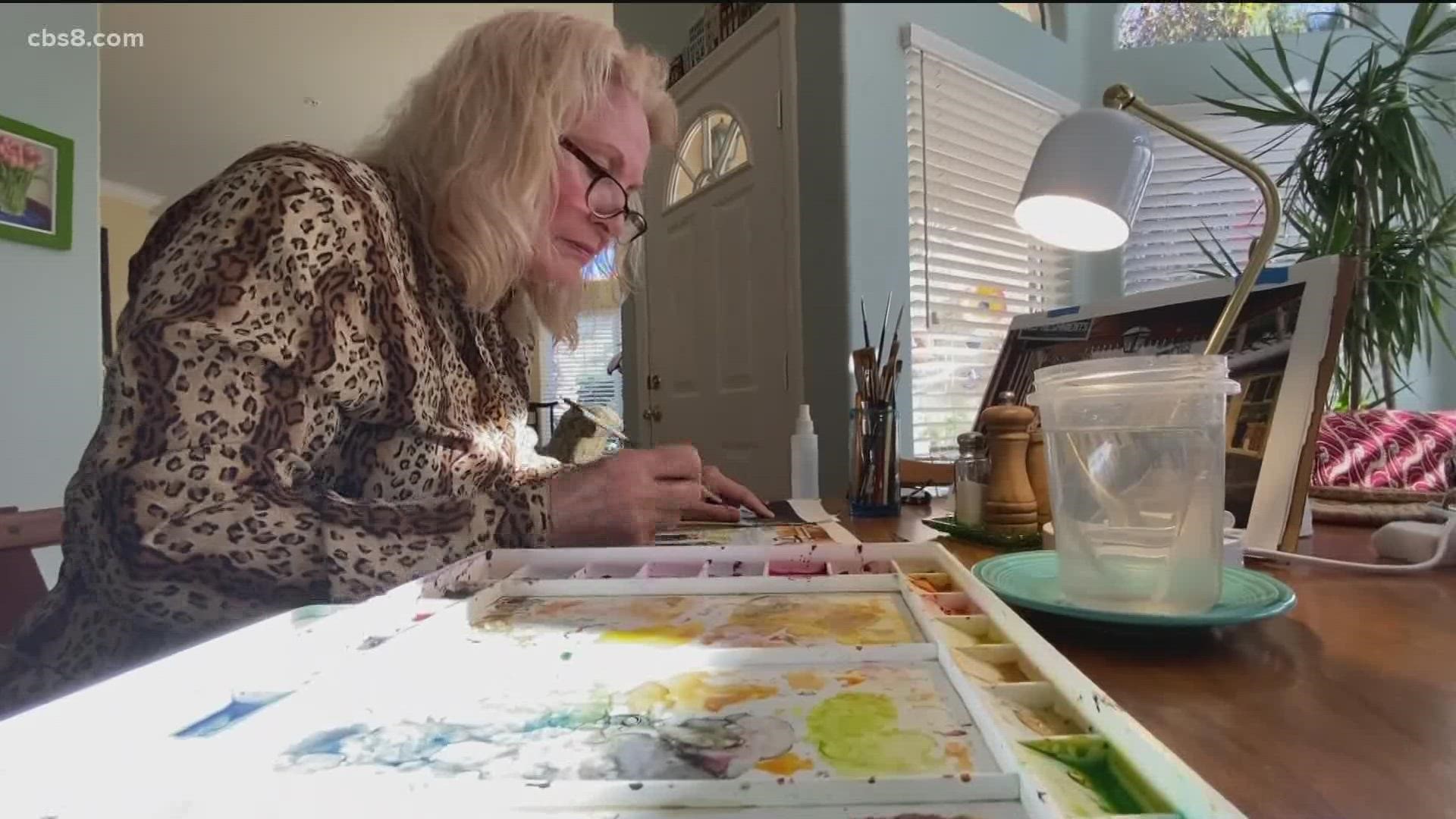 Carlsbad artist finally frames the life of her dreams