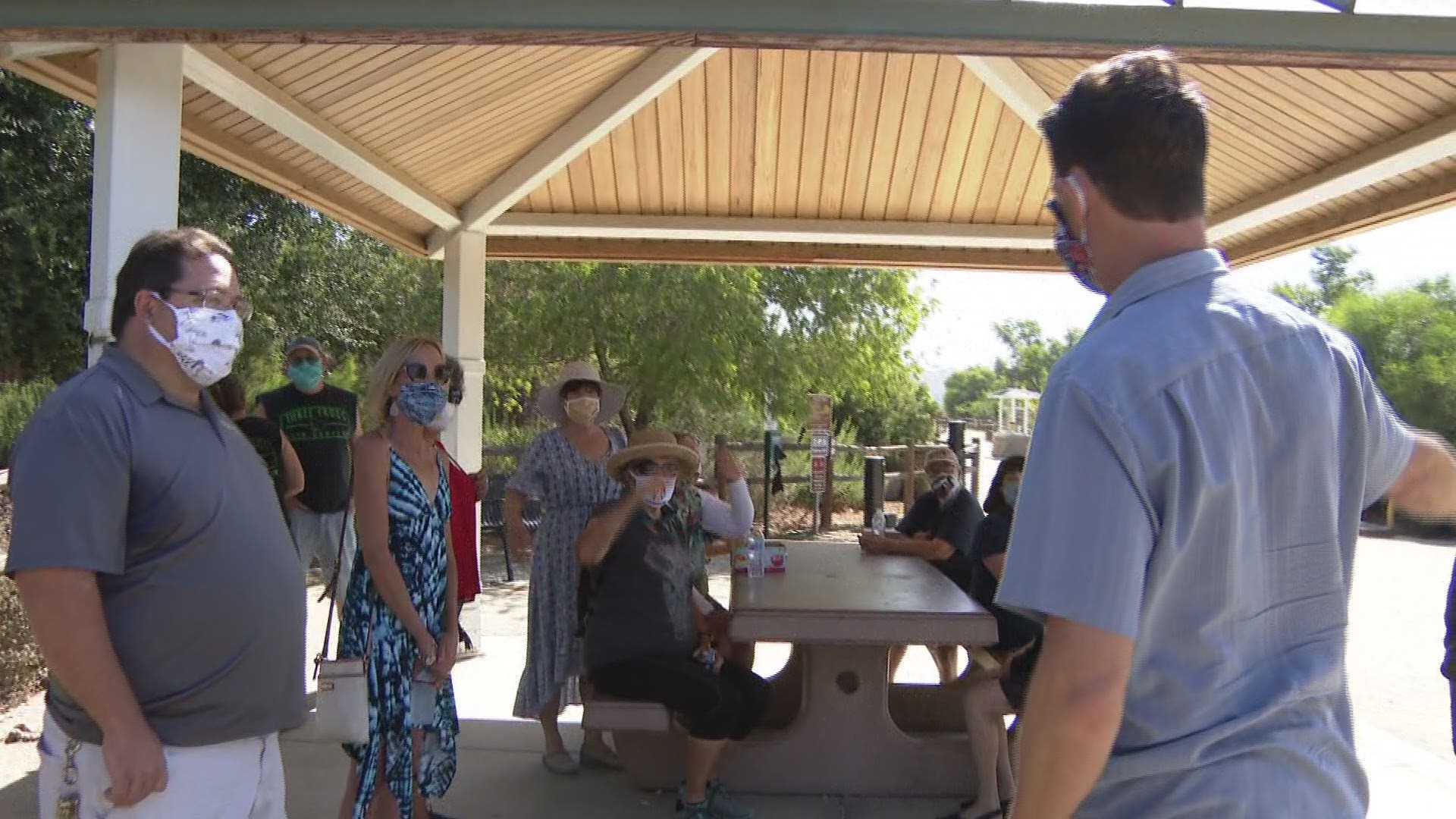 SANTEE, Calif. — Santee residents have spotted a giant snake on a popular trail and said it's growing larger every day. In this Zevely Zone, I visited the Walker Preserve Trail to lay eyes on the COVID Snake.

"Good morning," I said to a group of about 20 people waiting at the head of the trail.

"Good morning," they responded in unison.

They called me to show me a snake made of rocks and hope.

"We are going to go take a look if you'd like to come with us," said an especially cheery woman.

Of all the snake sightings I've received along popular walking trails, this call was made not out of fear, but out of fun.

"This is a snake head and he has COVID on it. He is our COVID-19 snake," said another smiling person.

Back in June, Elaine Nelson started this peace train.

"I am amazed. I am speechless," said Elaine.

She's amazed not only by the size of the growing snake, but by it's lack of venom.

"This one says 'It's a beautiful day' and this one says 'Inspire,'" said another nice lady, who was gifting hand-painted rocks to News 8 photographer Scott Hall and and me.

Matt Marsman runs the Facebook group Santee Rocks for 15,000 followers with the goal of positivity, not politics.

"I think it started with 15 rocks and now there are more than 200," said one of the rockers.

She told me the snake has been nicknamed 'Gappy' because when someone takes a rock, there's gap and they are encouraged to replace the rock and fill the gap.

"You find joy in painting them and you hide them and it's even more fun to watch people find them," said Dan Lloyd.

"I just love the happiness and spreading the kindness. It's incredibly wonderful," said Norma.

COVID-19 was giving a 4-year-old named Sal that sinking feeling until his mother said his spirit was lifted by discovering the little gems.

"They light up his day. With all of this stuff going on, this was the only happiness he had for a while," said Sal's mother.

Just reading the messages written on the rocks tells a story.  Even in the midst of a health crisis, if we can "Be Kind", treat each other with "Love", "Stay Safe" and show "Self Control" then maybe we can - as the last rock reads - "Kill the COVID."

At least that's what I learned from a pile of rocks.

RELATED: The COVID-19 lockdown 'unlocks' creativity with a COVID Robot

You can see the COVID Snake free of charge at Santee's Walker Preserve Trail.