In the 171-year history of the Sheriff's Department, Deputy Racine is only the 15th female K9 handler. 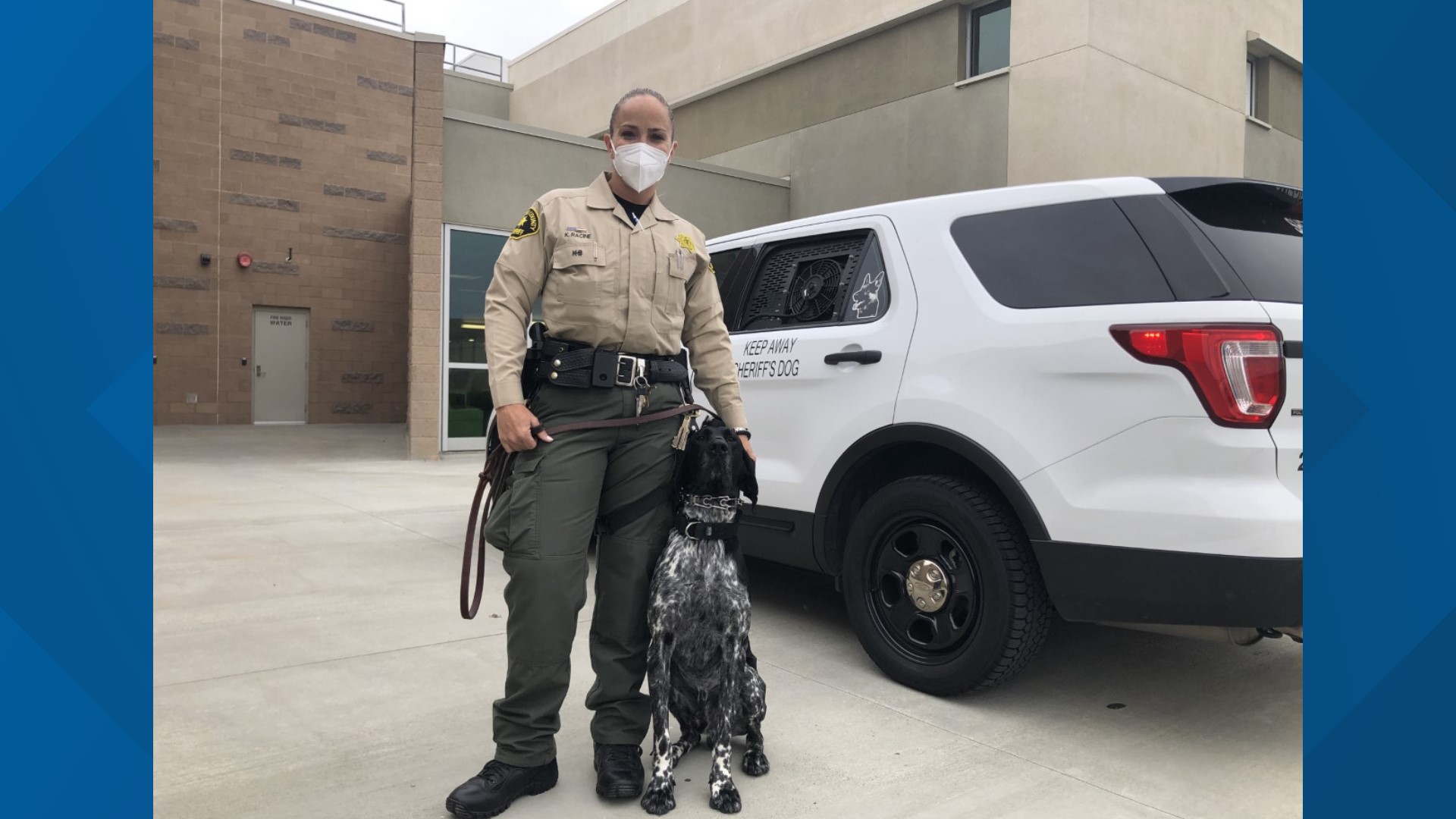 SANTEE, Calif. — March is Women's History Month and we are celebrating a female deputy with the Sheriff's Department with a job few women have taken on. In this Zevely Zone, I went to Santee to meet a K-9 handler and her partner, Rex.

"Come on. You want to go find it?" asked Deputy Kirsten Racine as she coaxed her partner Rex out of her patrol car.  Rex is a three-year-old German short-haired pointer and trained narcotics dog.

Rex looks like a bird dog. "He is a bird dog," said Deputy Racine and so much more.

Deputy Racine and Rex work at the Las Colinas Detention and Reentry Facility. They start the day with a jail perimeter check. "He is very interesting, he wants to sniff anything, and he is extremely inquisitive," said Deputy Racine.

Rex is trained to sniff out three items deputies never want to find hidden inside a jail. "Methamphetamine, cocaine and heroin," said Deputy Racine.  Together they have found 50 grams of drugs in the past 18 months. If inmates pass the voluntary drug drop box at intake and somehow avoid detection at the high-tech body scanners, Rex is waiting.

Many people are not aware K-9 dogs are crucial in stopping illegal drugs from coming into detention facilities. Their remarkable sense of smell helps deputies do their jobs safer and faster.

There are 48 beds in the housing module we visited. In the training exercise we witnessed, Deputy Racine placed some pseudo-heroin in a bookshelf.  She then checked to see if Rex could find it. "Woof, woof," howled Rex after just a few seconds of sniffing.

It's really tough to get into the K-9 Unit because of the rigorous physical fitness demands of the job. In the 171-year history of the Sheriff's Department, Deputy Racine is only the 15th female K9 handler. Her advice to girls reading this article? "Anybody can do anything they put their mind to," said Deputy Racine.

Rex weighs 75 pounds and every K-9 handler must be capable of carrying their dogs out of trouble. "I have to be able to pick him up and carry him up or down stairs, whatever it's going to take to get him to my car and to the vet quickly," said Deputy Racine.

Not only would Deputy Racine never leave Rex behind, when Rex retires, she hopes he retires with her family,  "Absolutely," she said with a smile. Along with an unbreakable bond, you may be wondering what's in it for Rex?

At the end of the day, Rex and Racine make a difficult job look as easy as a dog chasing a ball.  "Good boy, way to go buddy," said Deputy Racine. Rex answered back, "Woof, woof."

Deputy Racine and Rex completed 20 weeks of obedience and drug detention training together. Deputy Racine recommends a career in law enforcement to anyone who has a desire to serve San Diego County's community.