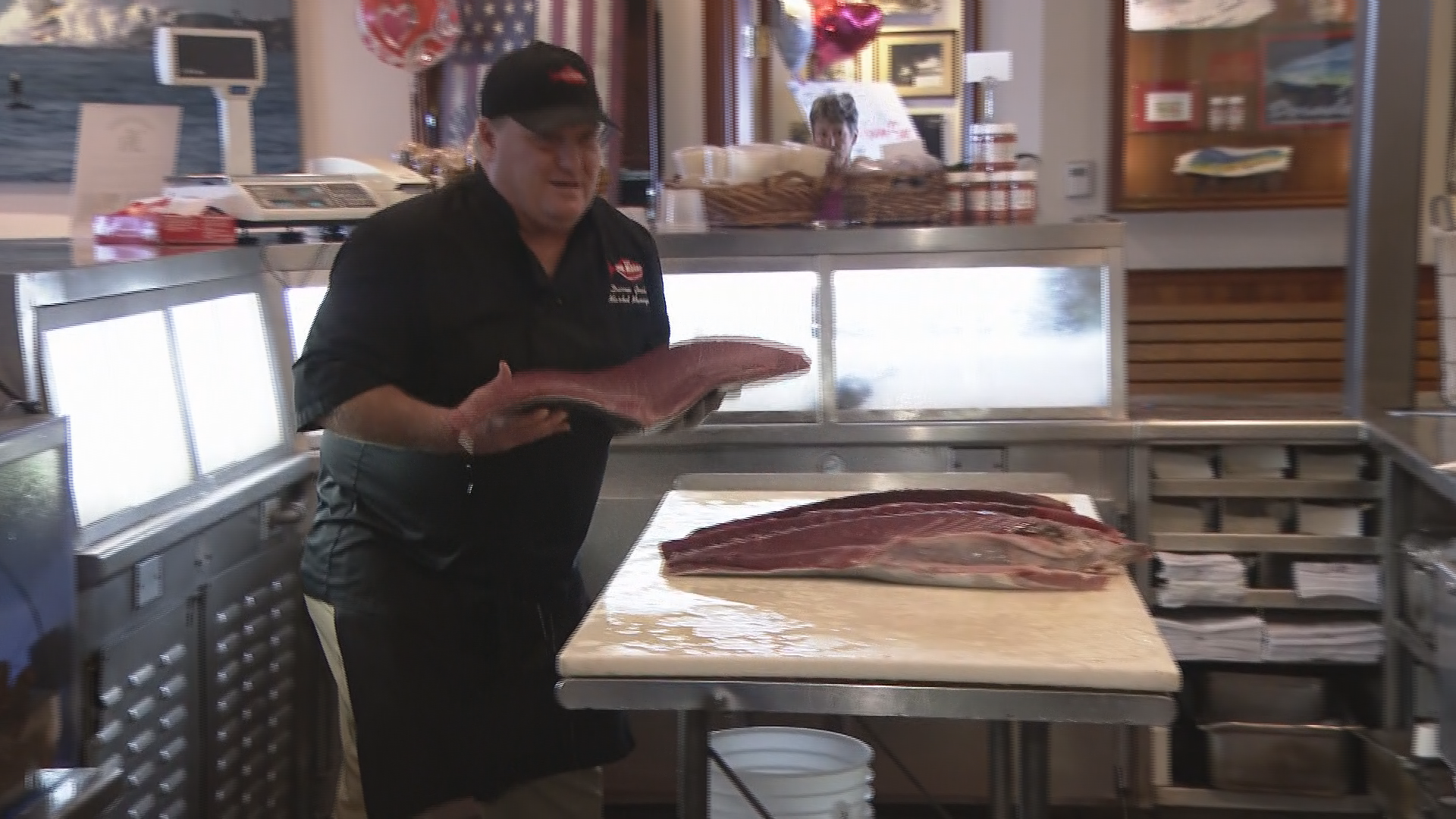 SAN DIEGO — I reeled in a big one. I got to meet San Diego's most famous fishmonger of all time, Darren Gorski. San Diego's love affair with The Fish Market is celebrating 30-years. Behind the fine dining and sunset views is the biggest fish of them all. "Darren nice to meet you, your hand doesn't smell like fish does it?" I asked. Darren responded with a chuckle, "Not right now,". "Okay, then nice to meet you," I said knowing that we are both about ready to get super fishy.

Darren Gorski grew up in New Jersey on fishing boats. At age 11, the fishing business stuck its claws him and never let go. "My dad was a commercial fisherman, he worked on scallop boats and worked on party boats," said Darren. He moved to San Diego and has been suiting up at The Fish Market since 1988.

I'm here to fillet fish. Time to get to work. "Some nice beautiful tuna. Alright?" said Darren. The Yellowfin Tuna is about a $500 fish. No pressure. Every cut counts. "So you want to crack this pup here then just run it down to here," Darren used his knife to expertly slice up the fish. "I noticed that you are cutting the expensive fish? Ha, ha, ha and I am going to cut up the scrappers?" I asked. Darren said, "Yeah we have a couple of dogs over there for you."

Darren doesn't know this, but as a San Diego kid I filleted my share of fish as well. I brought in pictures of me with bass, tuna and some yellowtail. "Alright, Jeff's a natural. Good job," said Darren as I cut up a bass. I couldn't help but be a little nervous. Did I mention the crowd? At The Fish Market there is always a line of fish loving customers.

Darren wasn't fishing for compliments, but he deserved one nonetheless when he took a TV fish segment on him and threw in his own line. He held up a carcass and announced, "This fish has a song. I ain't got no body. Ha, ha."

The only thing sharper than his wit is Darren's knife, so count up those fingers. Darren held up his hands and said, "There you go, ha, ha, ha. All ten digits."

You need every one of them if you're going to handle the catch of the of the day. Darren starts throwing fish at me. "Ahh! Coming in hot!"

To see a collection of vintage pictures and read more about The Fish Market's history in San Diego, click here.