Need a hug? How about a hug from a free teddy bear? 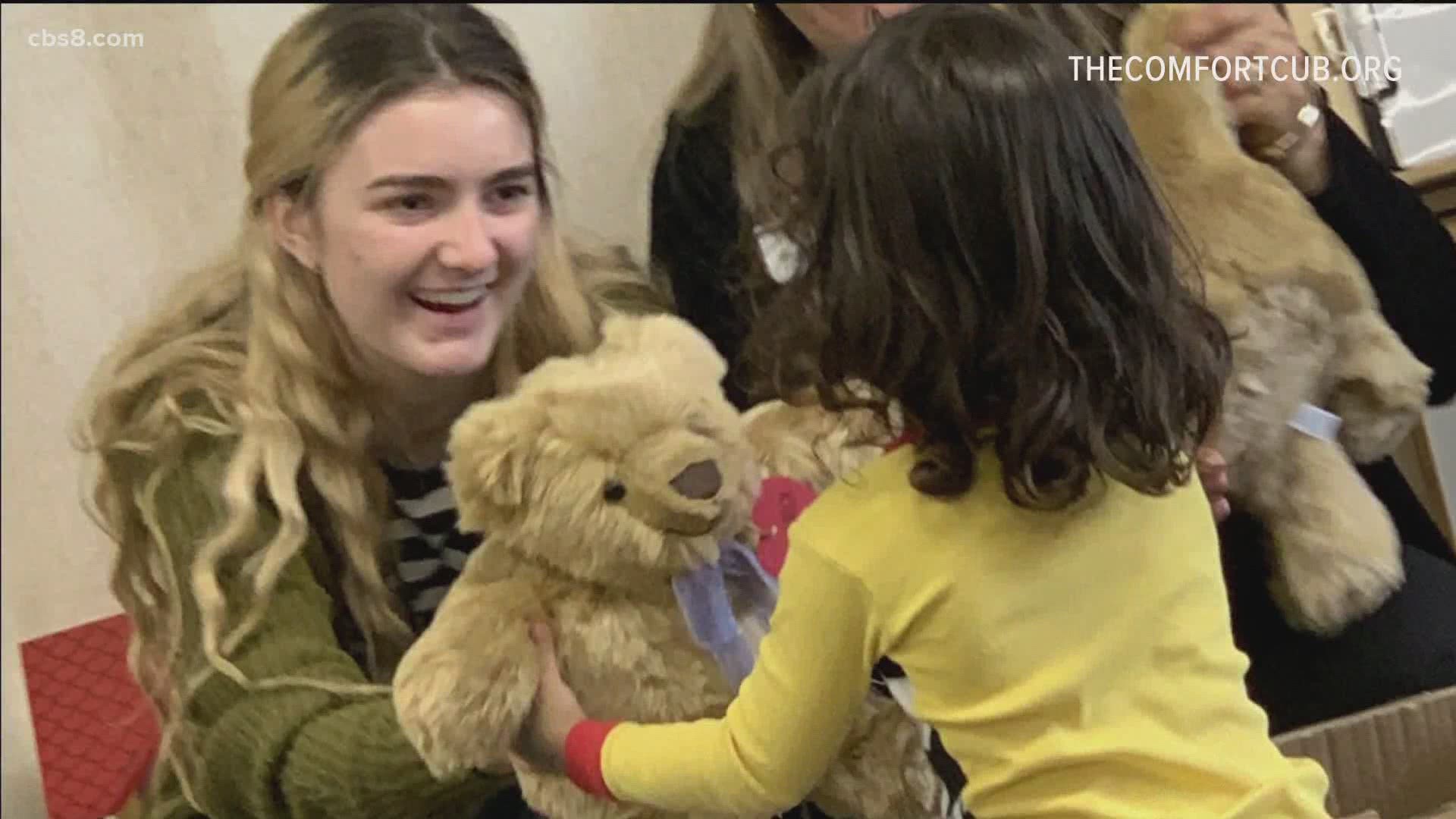 ENCINITAS, Calif. — A mother in Olivenhain is giving away a thousand hugs of hope in the form of adorable weighted Teddy Bears.

"This story starts with my son George... he died the same day he was born," said Marcella Johnson.

Her baby passed away in 1999 from a rare genetic bone disorder.  Marcella says on the worst day of her life, more than anything she needed a hug.

"It feels really good, he's really sweet," said Marcella while hugging one of her bears.

Marcella started The Comfort Cub, a non-profit organization, that strives to never let a family leave a hospital empty-handed.  She says when you are the mother of a baby who dies you feel grief that words can not describe and it was at George's funeral where not only did her heart hurt but her arms ached.

Marcella says it wasn't until she picked up a terracotta pot that weighed about the same as a baby where she finally felt some relief.

What's known as Takotsubo cardiomyopathy or 'Broken Heart Syndrome' is often eased with a weighted object.

"So this is the original Comfort Cub," said Marcella, "He's filled with split peas but you know that we found out that if the split peas get wet they sprout."

The bears are now filled with plastic pellets. On the day of our shoot, Marcella's husband Matt, and two of their kids, were packing up special deliveries in their garage. 22,000 of the bears have been sent all over the world.

"So I am the rainbow baby," said Marcella's daughter Elizabeth Johnson.

She is 18 years old and her mother calls her that because after George died, Elizabeth was the gift that came after the storm.

They feel that cubs can be the same beautiful gift for others.

"It is amazing to see how this product has not only benefited my mom with her grieving process but I have been able to see first hand how it has affected other people," said Elizabeth.

The Comfort Cub is celebrating its 20th anniversary. George would have just turned 21.

"My family and other believers and benefactors of The Comfort Cub pulled together and we raised enough money to give away 1,000 teddy bears in his honor," said Marcella.

The bears usually cost $50 dollars to buy and another $15s to ship but Marcella decided, "Let's just give the teddy bears to anyone experiencing pain."

For free. I'm pretty sure you know someone who needs a hug.

Marcella is in the process of giving away one thousand Comfort Cubs.  If a cub would help you or a friend, visit www.thecomfortcub.org/