Growing up a Jacobs with a 'Billionaire Grandpa'

Irwin and Adam Jacobs team up for community service 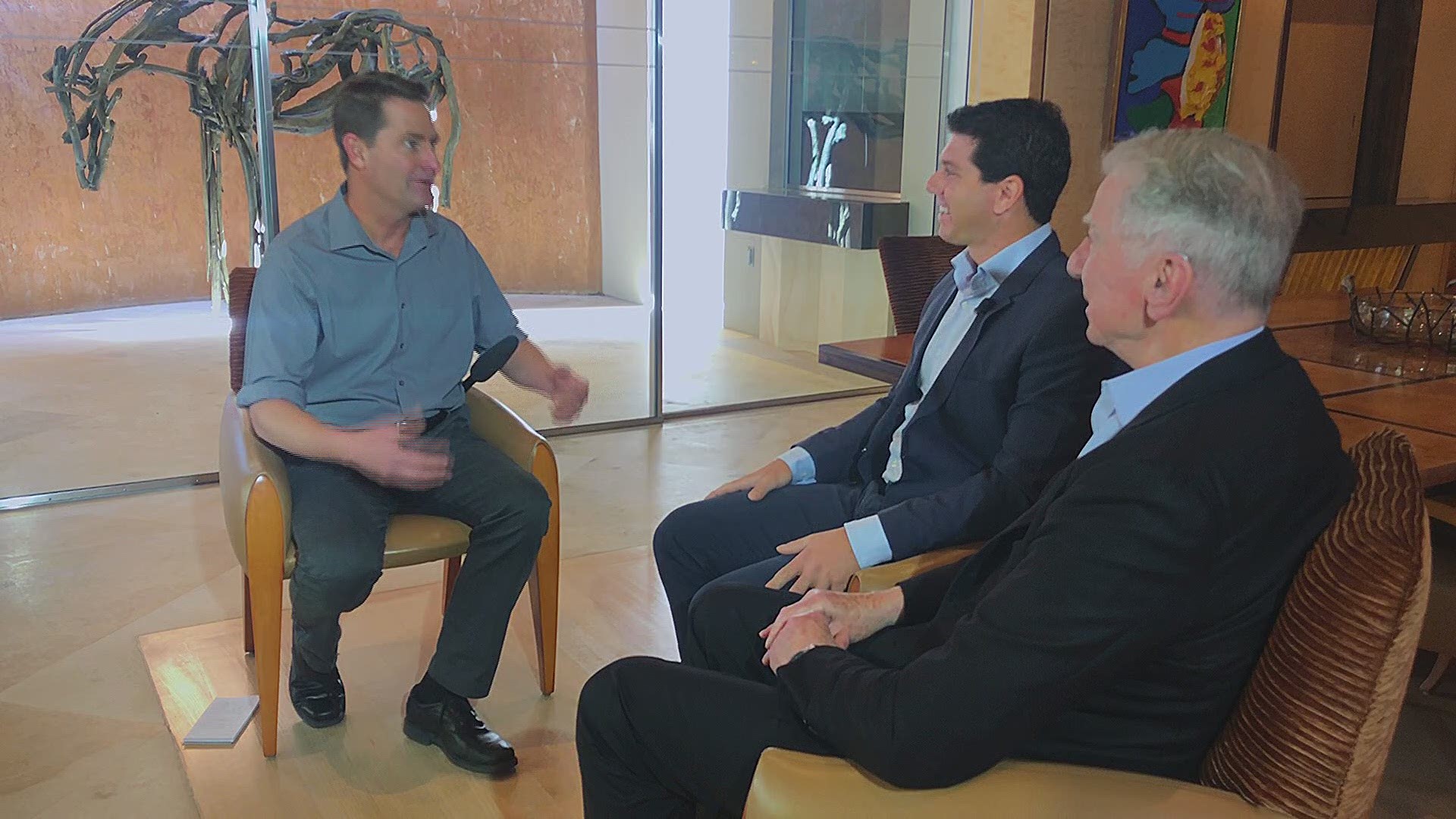 SAN DIEGO — Not everybody has a famous billionaire grandfather. In this Zevely Zone, I went to La Jolla to ask, "What is it like growing up a Jacobs in San Diego?" I sat down with Irwin Jacobs and his grandson Adam Jacobs at Irwin's house overlooking the ocean.

A few days before the interview, Adam sent me a picture of his grandfather and him at a back yard grill, so I figured why not start with that?

"So what's it like barbequing burgers with a billionaire who just happens to be your grandfather?" I asked.  Adam jumped right in and said, "Well that's actually only the first time I've seen him at a BBQ! He likes to eat the BBQ rather than cook it."  I have to tell you of all of the interviews I have done with rich and famous people, the bond between this grandfather and his grandson immediately put me at ease.

I learned that when Irwin Jacobs was busy growing his fortune at Linkabit and Qualcomm in the 1970s and 1980s, he was also growing a family. "Adam was our first grandchild," said Irwin.

He and his wife Joan have twelve grandchildren in all. But Adam was the first grandchild and from an early age this grandpa and grandson shared a special bond. "We used to have a basketball hoop on the front of the house so we'd go out there and shoot hoops," said Adam.

Back then, no one knew Adam would go on to play professional baseball in Australia. "I found out very quickly that Adam had a very strong arm for throwing a baseball, so once he got a few years old I didn't try to catch," said Irwin.

On March 19th, Adam will be throwing questions at his famous grandfather at the Carlsbad Chamber of Commerce Achievement and Distinction Awards Luncheon. "You're an open book?" I asked Irwin.  He laughed and responded, "Well we'll find out," Irwin says he doesn't want to know any of the questions in advance. "Well I think it works out better for the audience so you are thinking about it together," said Irwin.

The last time I was at the Jacobs' residence in La Jolla, the Secret Service kept the media two blocks away because Barack Obama was there. "Well we had dinner the first time he was here," said Irwin "He always loved getting out on the deck and being able to look out over La Jolla and La Jolla Shores."

Family pictures line the walls of their home with famous faces of people like Bill and Hillary Clinton. If you look close at the pictures you'll see Adam waiting for his chance to step into the spotlight. "Grandpa has always told me to start in the mailroom with whatever you're doing," said Adam.

In other words, start at the bottom, but always give back. Adam is the co-chair for the JCC Maccabi Experience that is inviting 25-hundred Jewish teens to San Diego this summer. "I played in the games when I was younger, I coached and now is my chance to chair this great event," said Adam.

Irwin and Joan Jacobs have donated more than half a billion dollars to good causes and always made time to put family first. "Even when he was building a multi-billion dollar corporation he made time to be at our sporting events, our plays, our school promotions all of those things," said Adam "They are still just grandma and grandpa to me and I think that's something that is really cool and special that we have."

So who is the better barbequer? Irwin laughed and said, "My wife says keep away; you make too much of a mess now."

If you're interested in attending the Carlsbad Chamber of Commerce luncheon in March go to carlsbad.org/event/2020cbadawards.

If you'd like to help out with the JCC Maccabi Experience in August go to sdmaccabi2020.org.