The 90-year-old remembers 2,000 songs. He'll give you a performance you'll never forget either. 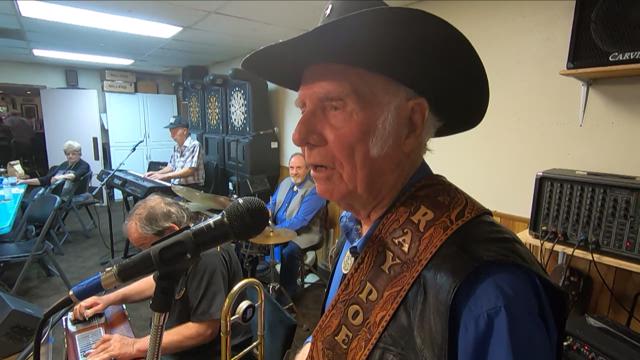 LEMON GROVE, Calif. — So you say you like to sing? How many songs do you know?  In this Zevely Zone, I "go country" at  VFW Post 1512 in Lemon Grove.  I'm here to meet the 90-year-old Lakeside legend, Ray Poe.  I'm told Ray has out performed and out lasted every country singer from his generation by a country mile.

"He's the real deal," said Fred Verd, who never dreamed he'd get to play side by side with his idol.  "To come across a 90-year old man that leads a band that plays music that you just do not hear anymore is amazing," said Verd, who is wearing the biggest grin and cowboy hat imaginable.

Ray Poe grew up in Louisiana in a family with 11 kids.  He learned how to play the guitar and fend for himself at the breakfast table.

He is one of those guys who has a twinkle in his eye and you are hooked by his country charm the second you meet him.

Ray served in the Navy.  His band is made of up Army and Navy veterans who play for military families at the VFW, who feel like family as soon as you meet them. So, I do just that.

"Hi I'm Jeff," I said two a married couple who are fans of Ray.  "I'm Barbara, and I'm Rodney," they respond before heading put on the dance floor.

Ask any of Ray's fans and they'll tell you Ray is known for two things: his musicianship and his memory. He knows 2,000 songs.

"I've never seen anybody know so many tunes," said a member of his band Jim "Steel Bone" Cook. "Thousands and thousands of tunes he remembers. We don't know them we just play them. If he can sing them, we can play them."

For a man known for his memory, what I am about to tell you is no joke.

"He did marry me on April Fool's Day," said Jeannie Poe, who got hitched to this country boy on April 1, 1949.

"He said, 'Oh, I forgot to tell you, I'm already married and got two children in Louisiana' and I got up and locked myself in the bathroom and I stayed there all night," said Jeannie.

Ray may be the leader of his band but after making a mistake like that, he's been playing second fiddle to Jeannie for the past 70 years.

Dennis Geurin, who plays drums for Pickin' Time, warns about the limited time we have to see this icon. "The people better come out now while they can because when it's over, it's gone forever," said Dennis.

Ray says he plans to 'walk the line' for many more years in sneakers.

"I wear boots every now and then but sometimes I walk better if I don't wear the boots, Ha, ha, ha," said Ray. I asked, "You can be a cowboy and not wear boots?" There's that twinkle in his eye again as he said, "That's right."

Plus, because this real cowboy might not approve, I snuck up on the legend behind a 10-gallon hat to take a selfie with a legend.

Ray Poe and Pickin' Time will be performing at the VFW Post 1512 in Lemon Grove on September 14th and 28th.