Dez Patmon will soon be catching passes from Philip Rivers. 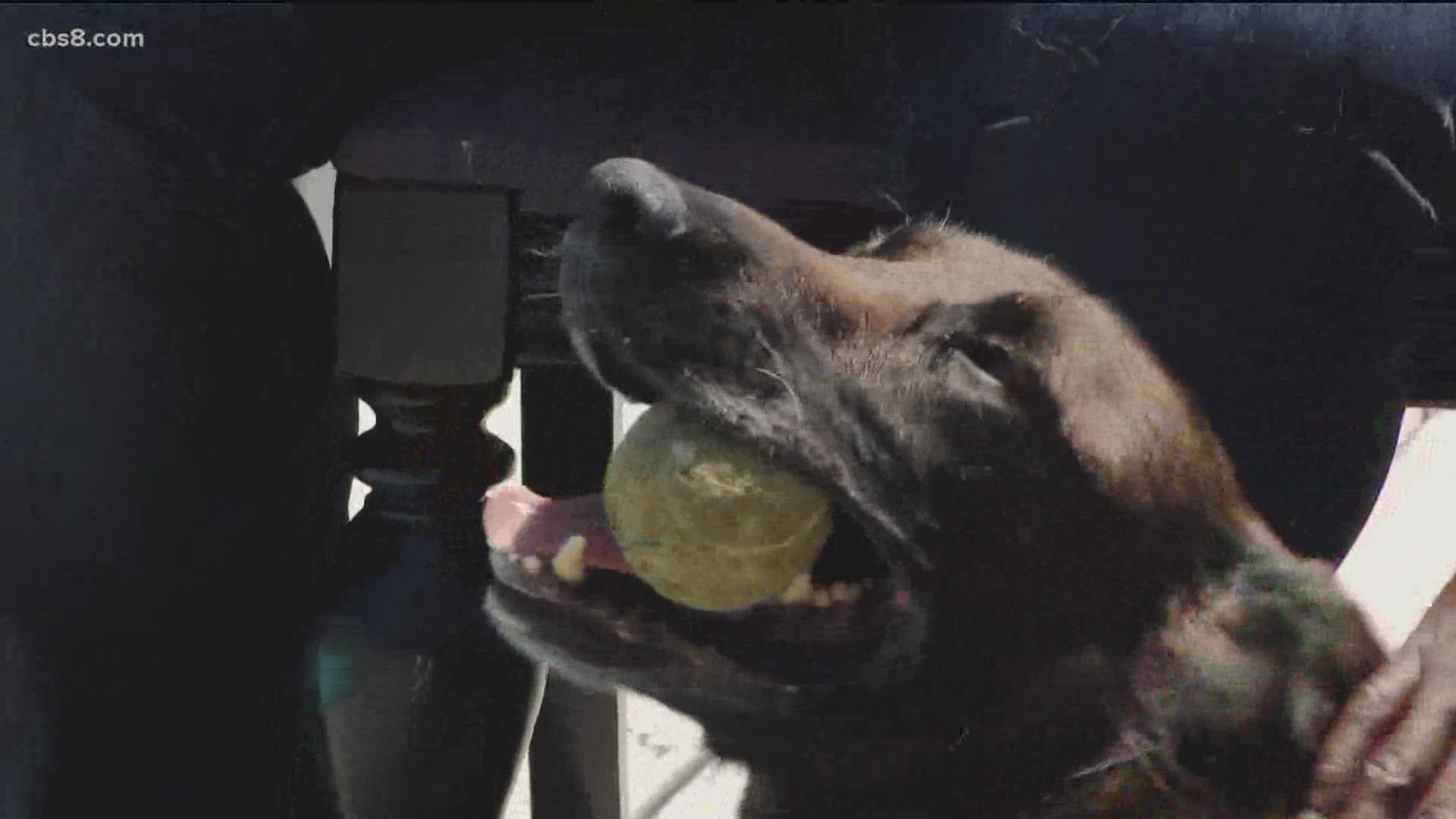 SAN DIEGO — It almost sounds like a Disney movie - an injured K-9 from the San Diego County Sheriff's Department retires with a NFL family. In this Zevely Zone, I went to San Carlos and scored a real touchdown.

I sat poolside with the Patmon family at their home.

"I think the most important question is 'How is Bono?'" I asked.

Last fall, the courageous K-9 from the Sheriff's Department was attacked by a suspect near Jamul.

"Bono got stabbed a couple of times. He fought through it. We were able to take the guy into custody and now he is enjoying retirement life," said the deputy, who was Bono's handler.

Bono will live the rest of his life with his handler and his family, so we might as well introduce you to their full house.

Theresa worked for the Sheriff's Department. Her daughter, Amanda, currently does and so does Amanda's daughter, Dezmaree, as a student.

"Are you thinking you are going to be a lifer?" I asked the 19-year old.

"We are going to see. It's in the family business so that might happen," said Dezmaree.

There are two Patmon passions: law enforcement and sports. Dezianna wants to play college softball and share some family secrets.

"Uh, that I can say on TV? That they are crazy," said Dezianna.

They showed me a family video that went viral and it was certainly crazy.

I laughed and said, "I hear that Bono isn't the only one who enjoys going in the pool?"

Dezmon Patmon just got drafted by the Indianapolis Colts, which called for a celebratory swim with his mom. The video shows him dragging his mom into the pool.

When your son grows up and starts catching passes thrown by Philip Rivers, mom gets her revenge by breaking out memory lane.  She showed me dozens of Dezmon's childhood pictures.

"Dezmon Patmon, this is your life," I said. "I got some good ones in here."

Dezmon laughed and said, "Yeah I'm sure you do. Yeah, that's the whole Facebook."

I said, "This is payback from the pool."

Dez agreed, "Yeah I can see that."

Dezmon's childhood dream came true and Bono's did too. He has a new mom.

I asked, "Amanda are you spoiling Bono?"

She laughed and said, "Definitely."

Dezmon isn't the only one who can catch a ball around here.  Bono followed the ball into the pool.

Enjoy your retirement Bono. Jump on in. The water's fine.

Bono may have retired, but not Deputy Patmon.  He is back on patrol with his new K-9 named Vitto.

RELATED: Dogs everywhere may freak out as stay-at home-orders loosen