Some of Toussaint's creations include da Vinci’s 'Mona Lisa' and 'Girl with a Pearl Earring' by Johannes Vermeer. 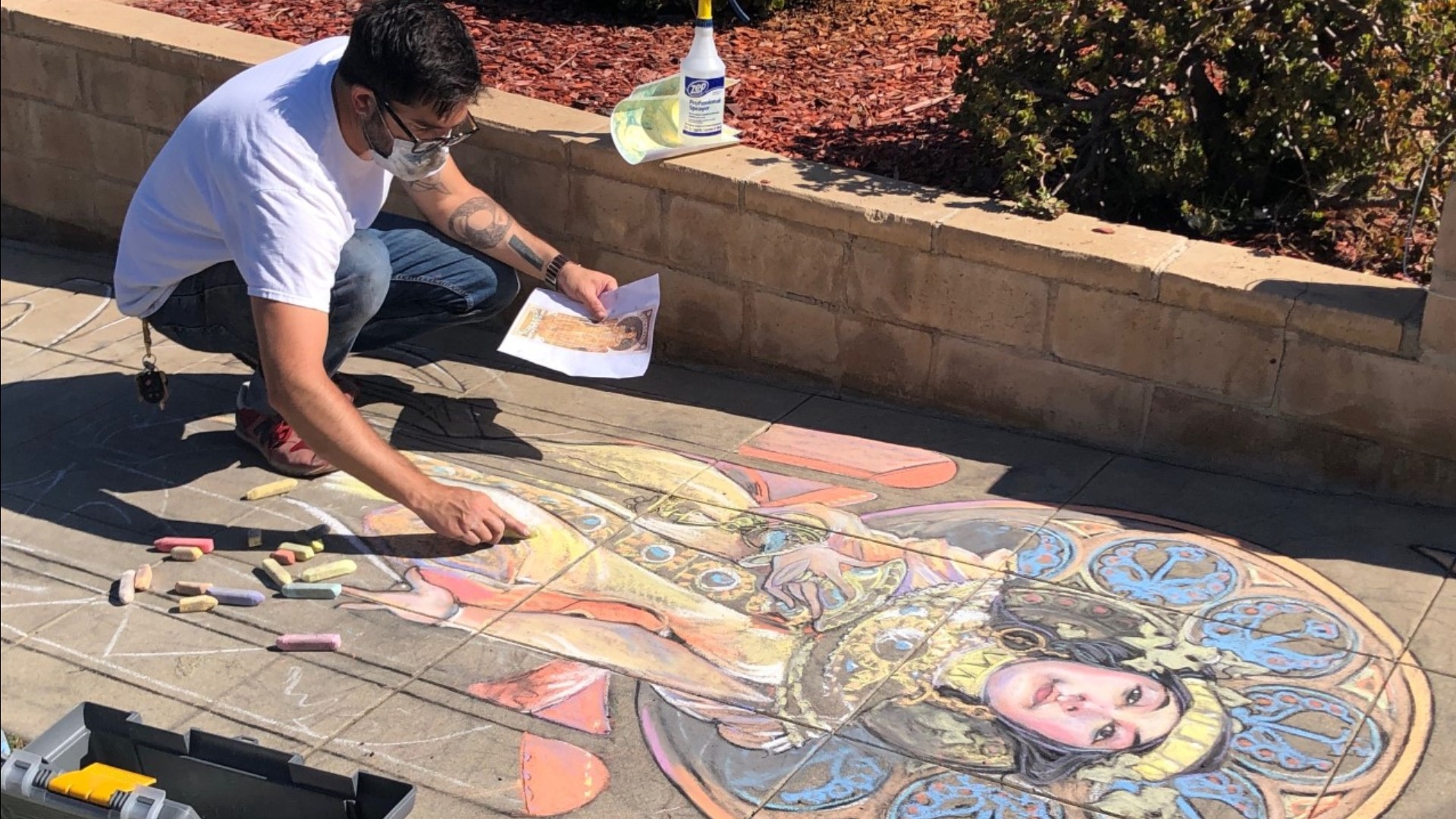 SAN DIEGO — The pandemic has brought out the creative side in a lot of us and there is no better example than a father in Ocean Beach. In this Zevely Zone, I met the "Chalk Dad".

Like so many parents during COVID, Erick Toussaint needed an outlet for his kids. We've all picked up a stick of Crayola chalk, but how many of us turned the sidewalk in front of our homes into a canvas? "I am a bit obsessive compulsive, I am a designer, I am a graphic designer and it's just my nature so I think after the first time we were doing Tic-Tac-Toe and stuff and then I immediately I wonder if I can do the Mona Lisa or whatever," said Erick. He is the design director at the San Diego Natural History Museum and for him 'whatever' is a sidewalk masterpiece.

Erick showed me some of his creations, "da Vinci’s “Mona Lisa, then there is “Girl with a Pearl Earring" which is Johannes Vermeer," he said.  Toussaint’s neighbors have fallen in love with his weekly masterpieces.

"I just stopped and I go 'I can't believe this, it's phenomenal. You have a giant talent," said passerby Dean Pederson. "Well, you are making the world a better place."

Craig Lepore and his son Wesley couldn't help but stop and gawk at the chalk. "I think it's really cool," said Wesley.  A portrait of a Desperate Man caught their eye and that was very symbolic of the times. Craig told me, "Definitely. Basically it's the look of a man who looks startled and desperate and the way that he drew it popped out of the street it was pretty amazing."

Erick has refused to accept donations but at one point he mentioned he could use some chalk. He wants to thank his neighbors for dropping off more boxes than he could ever use.

Erick's 8-year old daughter, Larkin, appreciates the chalk but loves the time with her dad. I asked her, "What do people say when they walk by and they look at your artwork?"

Larkin told me," They say it's amazing, I love it, you should do more can I have that."

In a way, they can. Erick draws these pieces for the public then washes them away every Wednesday. "I've met many more neighbors in quarantine than I did prior," said Erick.

I asked him, "Do you feel pressure that you have to keep the hits coming?" Erick laughed and said, "I do now, yeah, thanks a lot, ha, ha."

RELATED: Hodgee: Giving Loch Ness a run for her money