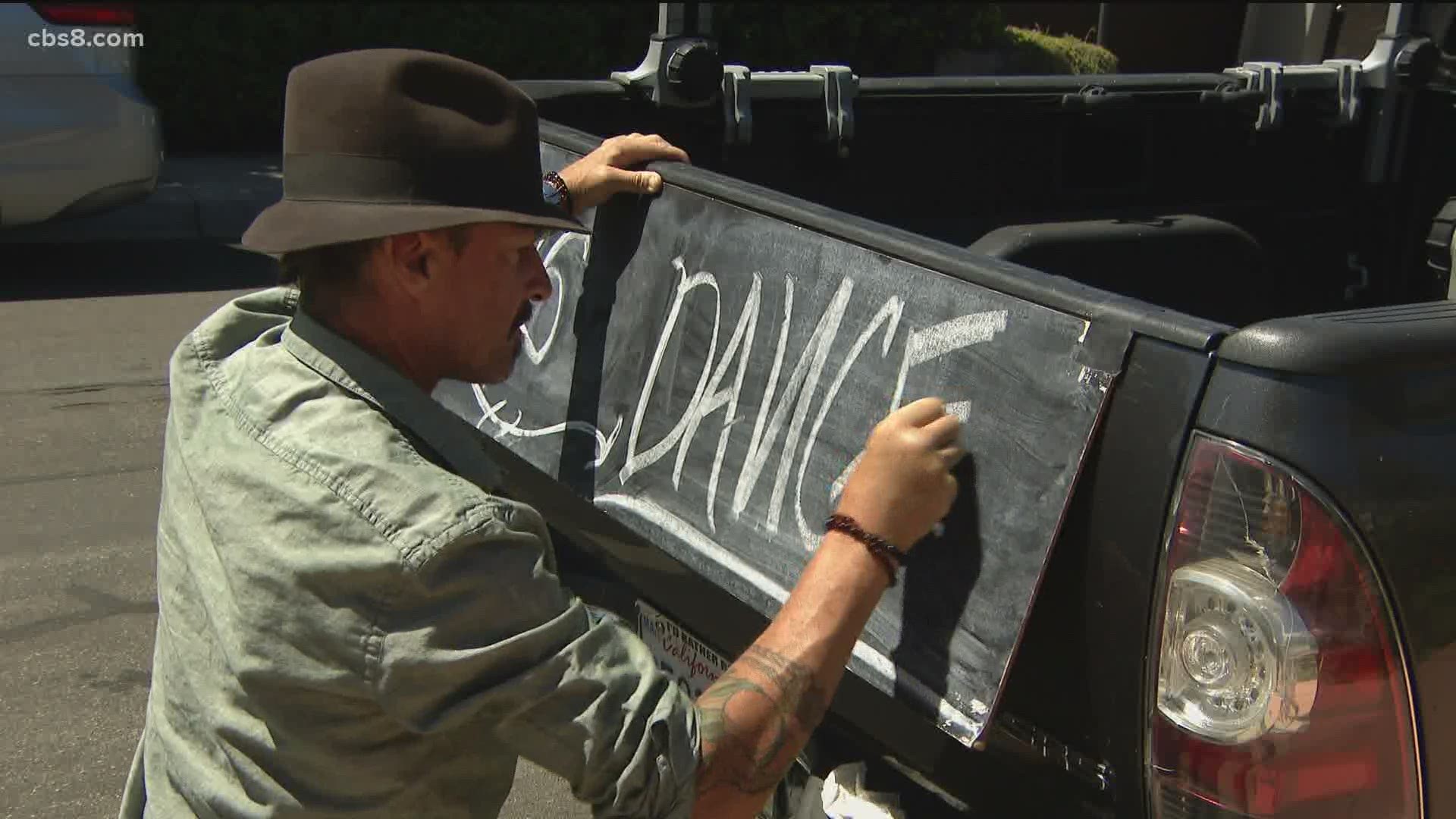 SAN DIEGO — In Pacific Beach, residents have been noticing inspirational messages written on the back of a pick up truck.

In this Zevely Zone, I tracked down person responsible for messages.

"I maybe leave here maybe once a week, that's about it," said Joshua Hartsough.

The 43-year old told me he's been stuck at home and started noticing about two months ago the bad body language from people walking by his home.

"It was like they were in a lull. You know super bummed out," said Joshua.

So, he started leaving inspirational messages on the back of his truck on a chalk board.

"It was instantaneous, as soon as they looked up they would smile," said Joshua.

He is an artist which means he's somewhat of a provocateur.

Joshua said he just knew if he played the right music people wouldn't be able to help themselves.

"They can't. I don't know about you, but do you feel good when you dance?" he asked me.

I responded, "I feel great when I dance."

Joshua laughed and said, "Yep, even if you can't dance it still feels good."

To which I said, "It sounds to me that we are going to have to dance."

Joshua then flatly refused, "Oh no, not on camera."

But people walking and jogging by Joshua's house did like Jessica Reid and Judy Bezverkov.

Judy told me, "Sure you want to dance we need to stay six feet apart but we can do something here."

Which is exactly why Joshua was hoping we'd all get the message. His music makes us dance but his messages make us think.

Like the message that read, "A hot dog is not a dog it's a wiener."

Joshua thinks that was hilarious.

"It was the first one that I wrote, and got every one cracking up. It's better to see someone smile than frown," he said.

From there the hits kept coming like the one that read: "There's an elk somewhere."

Joshua explained, "That is for my friends who can't go hunting."

Next up a sketch of a raccoon standing behind a tree.

One of his signs simply read: "I love my mom."

He said, "Hell yeah, I love my whole damn family."

And something told me deep down he loves to dance too. So when I started to dance, he said he had to as well.

I laughed and said, "I knew you'd dance."

He smiled and said, "You jerk."

Joshua said his messages are never political, and even after the pandemic ends he may just continue leaving little gems for his neighbors.