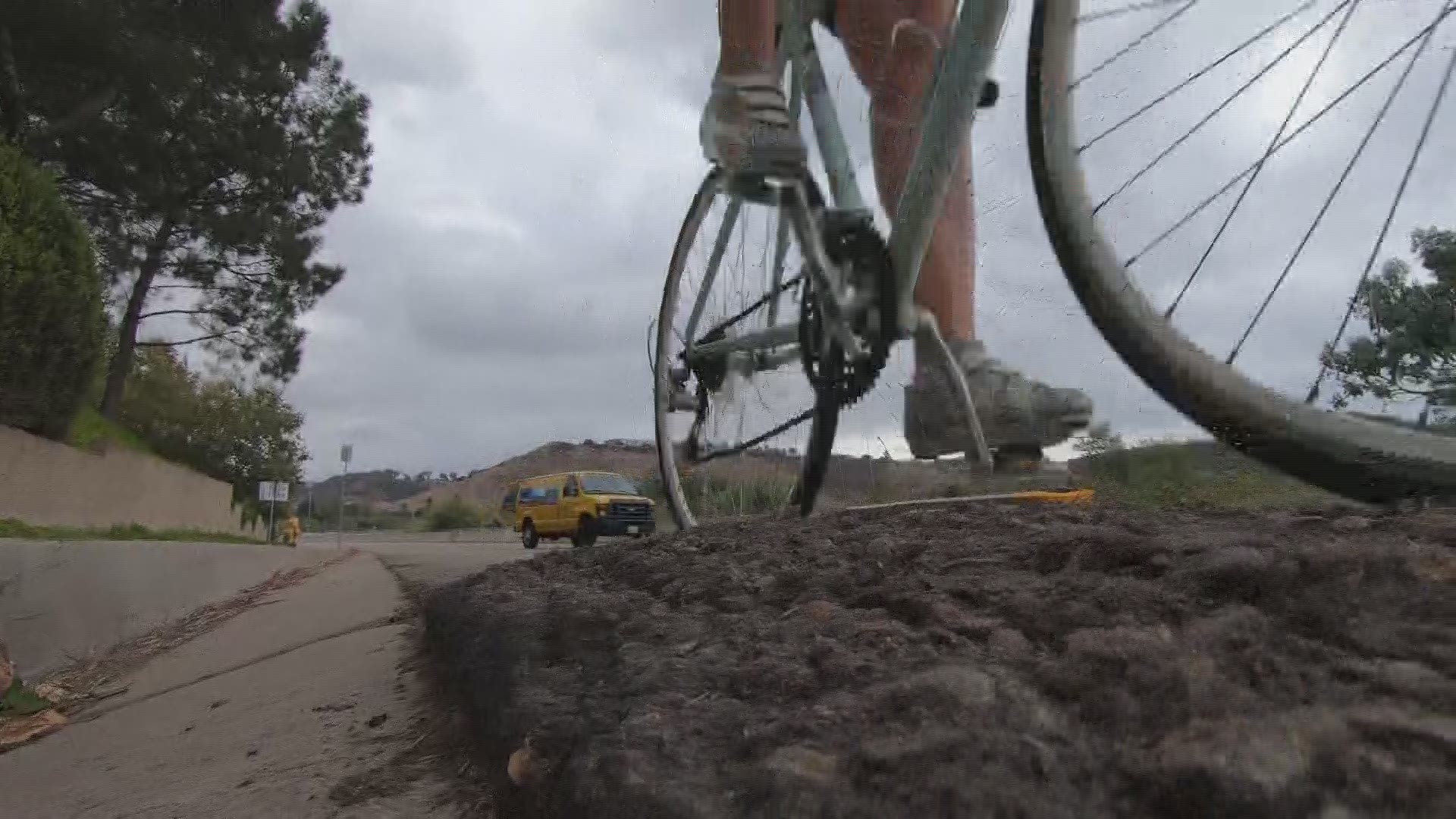 An Encinitas woman who leaves her car at home and bikes to work is fed up with the rough roads and ride.  In this Zevely Zone, I went to Sorrento Valley to ride my bike with the commuting cyclist.

"You are trying to make a difference? I asked.

"I am," said Anne Artz who said riding her bike to work feels like a job.  "I guess I am not a very confident bike rider.  I have fallen off my bike before and I am paranoid of falling off my bike [...] The whole road needs to be repaved so that everything matches."

We pedaled up Sorrento Valley Road and traveled north of the transit station to Carmel Mountain Road.  It's an industrial area that's seen lot's of construction that translates into a road that has been dug up and patched countless times.

"First, I wrote the county and they said it was a city problem and I wrote the city and I didn't get a response," said Anne.

"I e-mailed and I said ‘who can I talk to about this?’ and they gave me the same numbers and the same websites, and I was watching you on TV one day and I was like ‘I bet you Jeff would do this,’ so I told my husband and he says 'Oh no, Jeff only does the good stories. He doesn't do the negative stories,’" said Anne.

"Tell your husband I like to root for the little guy,” I said.

"I cross over right about there,” said Anne.

This is where Anne does something more dangerous than the potholes themselves.

"I ride illegally on this side right here so I don't have to go through that intersection," she said. "It doesn't look to me like anyone has done anything to this intersection in years."

"This stretch needs to be fixed," said Jeremy Kirkpatrick.

"This road is terrible. When you ride on it there are all of these potholes it's broken up and bad," said John Fischer.

I tip my hat to hat to all of the cyclists.  I no longer own a bike and borrowed my daughter's just to tag along.

Trying to pave the way for others seems like a decent gripe to me.  Anne wants more commuters to bike to work but asks, "Why are they going to ride their bike anymore when they are constantly dodging potholes and chunks of cement?"

I contacted the City of San Diego and I have good news to report.  City officials know the road is rough.  They plan of resurfacing the road in 2022 when a series of construction projects are completed.

Here is the city's message to me written by Anthony Santacroce, the Senior Public Information Officer from the City of San Diego.

"There is currently ongoing work on that stretch of Sorrento Valley Road. That has been the site of an underground utilities program for the last year. The markings you mentioned in your initial inquiry were most likely for Cox and AT&T who were on site last Friday trenching and placing their assets underground. Because the City does it's best to coordinate work to improve our infrastructure, there is also a water and sewer main replacement group job along that stretch of Sorrento Valley Road that will be in construction until 2022. Once this work is finished, Sorrento Valley Road will be repaved."