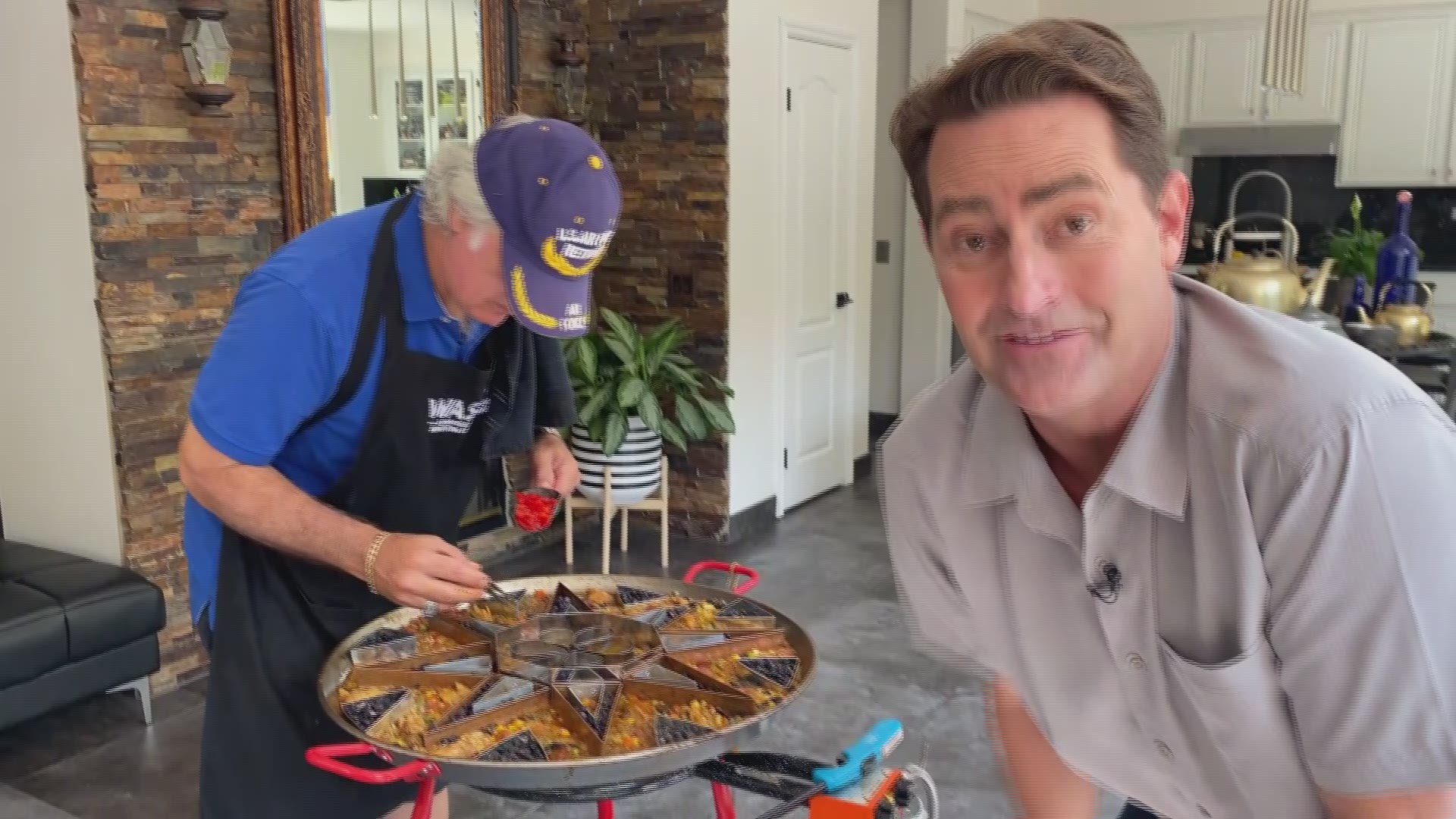 SAN DIEGO COUNTY, Calif. — Sometimes a hot meal can go a long way. In this Zevely Zone, I met a retired Air Force Major with a special skill and passion for helping homeless veterans. "I am going to mix all of this up with the Bomba rice," said Paul Dimech. He is known as the Prince of Paella. "Paella means pan. It comes from Latin," said Paul while showing me his collection of his pans that are every size for any event. "At your house, backyard, tailgates," Paul said who loves to cater. The bigger your party, the bigger Paul's paella. His biggest pan is 52 inches wide. He calls it the beast because it can feed up to 300 people.

Paella is a cross cultural fusion cuisine that is so ancient, Paul said no one really knows where it comes from. "The guy who invented paella is the same guy who invented combing your hair," said Paul who served in the Air Force for 28 years. Paul was deployed 12 time and served in Operations Desert Storm and Desert Shield. Even when he was in Bagdad, he was thinking about returning home to make paella.

The dish he made during our visit took three hours to make and combined 30 ingredients. Paul has been asked to cook again in September at the North County Veterans Stand Down. "I was honored, I was honored," said Paul with tears in his eyes. The four-day event in Vista provides help for disadvantaged homeless veterans with services such as housing, dental care, and forgiveness of court fines.

In 2019, Paul served 200 veterans with his biggest dish and they ate every bite. "They stood up and they and applauded and I broke down, yeah I know 28 years in the military, and you'd think I'd have a little bit more stomach that that," said Paul who suffers from PTSD. In 2009 a vehicle he was riding in was blown up by roadside bomb. "It makes me feel great when I am cooking for others," said Paul.

Cooking is his therapy, especially the final touches. "This is a big flat surface it is a canvas to me," said Paul. Who decorates his dishes with colorful pieces of food that give them appearance of a piece of art. "Now I start decorating. You are seeing something very unique here," said Paul who transforms from the 'Prince of Paella' into Picasso.

For Paul paella isn't just about the taste, presentation counts. "Yeah, paella should look good," said Paul. He has made 500 of the creations and never the same one twice. "Because I learn something with every paella so why would I do the same one twice?" asked Paul.

As good as his paella looks, it tasted even better. "Let the decadence begin," said Paul. Paul has been making Paella for a quarter century and his motto remains: "Every paella better than the last."

North County Veterans Stand Down is an annual four-day event in Vista, California, that enables homeless veterans from across San Diego County to receive much-needed services in a safe, friendly, drug-free, and secure environment. During their stay at the NCVSD, homeless veterans, their families and pets will receive food, lodging, clothing, and a variety of services to help them both physically and mentally.

The 5th Annual North County Veterans Stand Down will now be held on September 16-19. For more information click here. If you'd like to learn more about Paul Dimech's catering business, click here.