Interested in World War I, Ian McIntosh says a grave at Fort Rosecrans National Cemetery caught his eye because of the words "British Navy." 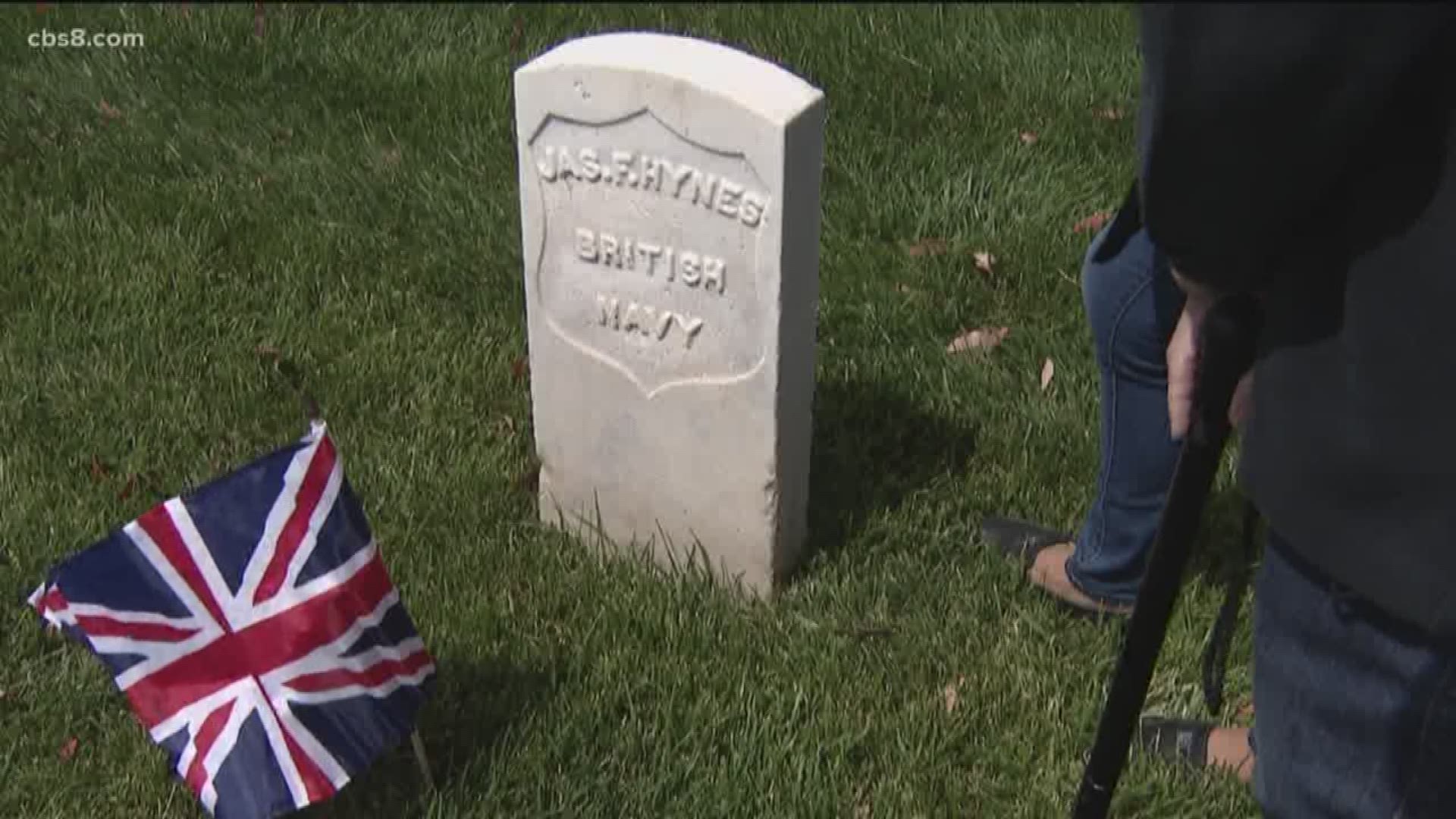 SAN DIEGO — Imagine being buried thousands of miles away from your home in another country and forgotten for 100 years. Jeff Zevely from the Zevely Zone visited Fort Rosecrans National Cemetery to see the grave of an unknown sailor.

"I'm unsteady, it's a good thing I have the cane to kind of steady myself," said Ian McIntosh, a hobby historian.

The 53-year-old is living with multiple sclerosis and was wobbly on his feet as he walked up a grassy hill to a grave with Jeff.

"His family did not know he was here. No one knows he is here," said McIntosh who happened upon the grave about a year ago.

Interested in World War I, McIntosh says the grave caught his eye because of the words "British Navy."

"His name is James Frederick Hynes but they called him 'Freddy.' I was kind of curious why an Irish World War I British sailor would be buried here in San Diego."

Ian is a retired San Diego Sheriff's Detention Sergeant who knows how to work a case, so he pulled the sailor's death certificate.

"When it said 'family members' and 'next of kin,' it kept saying 'unknown.' So, that was the saddest part," said McIntosh.

Ian dug into old newspapers and even asked his wife for help.

"I was like, 'What? Are you serious?' He was like, 'Yeah, can you help me go find the grave?'" said Juana McIntosh.

One clue lead to another and they learned after the war Freddy Hynes contracted the Spanish flu while taking an around-the-world cruise in 1919.

"When the ship pulled into San Diego, they sent him to the US Naval Hospital," said Ian. "So, when the ship left, it left him here alone and he died two days later and the Royal Navy told the United States to just bury him here, so that's what they did in 1919 and he's been here - virtually forgotten - this whole time."

Ian and Juana were able to connect with Freddy's relatives on Facebook and they are taking their act of goodwill one step further. In fact, they are taking it across the pond to Ireland to meet the relatives of Freddy Hynes this summer.

A century later, one last message for our allies:

"Just that they should not worry about him, his memory is good," said Ian.

This Memorial Day, thousands of American flags will be flanked by a royal salute to Freddy: a British flag.

"I cared about him and about his life and I didn't want him to be here forgotten exactly 100 years ago," said Ian.

Ian looked at a cemetery filled with loss and sacrifice and said, "They are all heroes. None of them should be forgotten."

Fitting really, for a former jailer to find the key and unlock the past.

Ian and Juana McIntosh plan on commemorating Hynes' grave with a British flag every Memorial Day.