Emily Kay has the pictures and the hook to prove her incredible shark story off the coast of California. 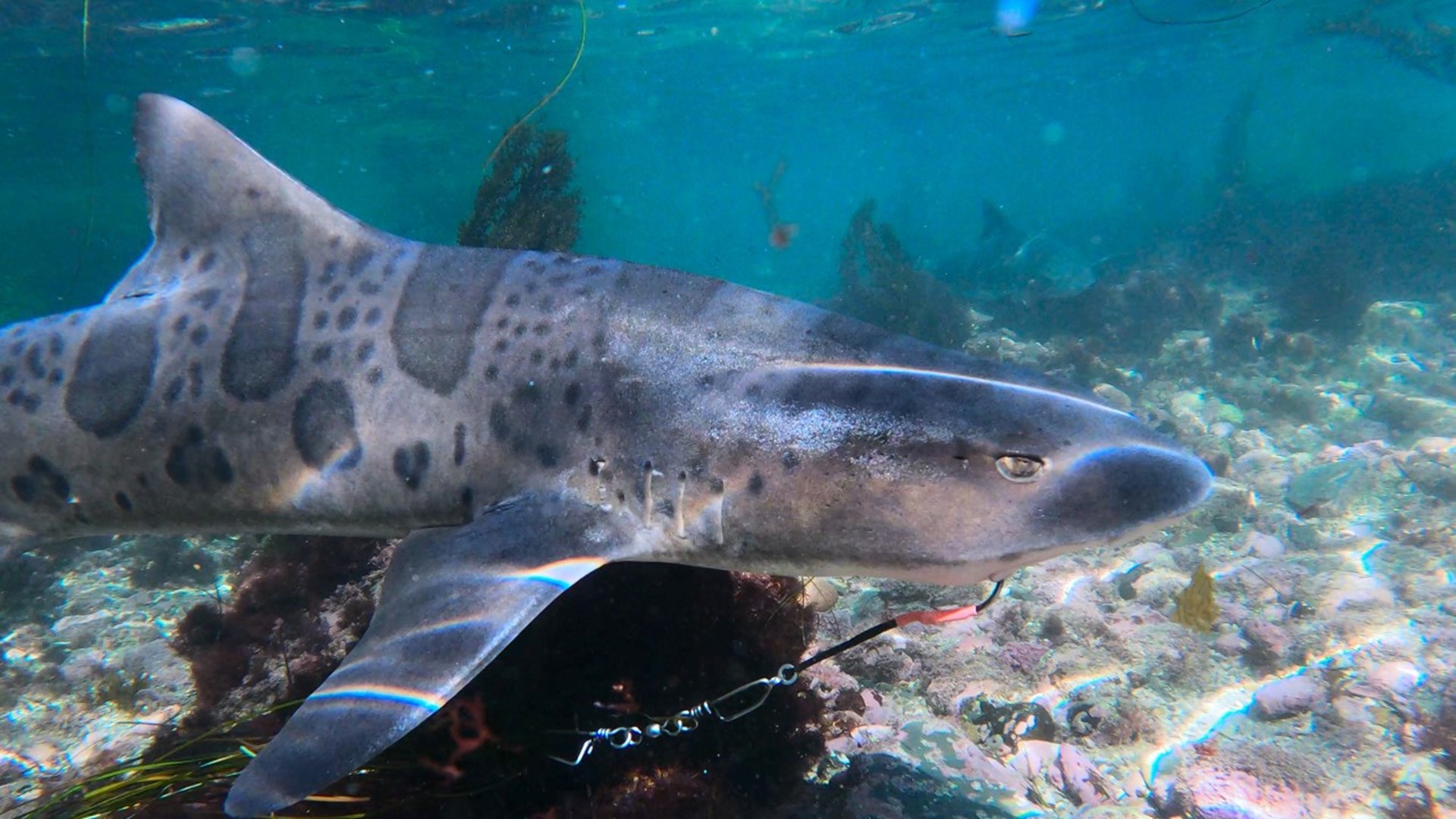 ENCINITAS, Calif. — How far would you go to help a wild animal in need? Would you help a shark in distress?  In this Zevely Zone, I met a snorkeler who put her hand where most wouldn't dare.

"I've swum and taken plenty of pictures of dolphins and plenty of sharks, " said Emily Kay.

We met at Beacon's Beach in Leucadia for a shark story you have to hear. Emily goes swimming and snorkeling almost every day and always takes a camera with her.

We started our conversation by scrolling through her Instagram page which is filled with underwater wonders.

"We have turtles here. I've swum with the turtles a ton," said Emily. "I've seen a lot. I've spent a lot of time in the ocean."

Three weeks ago off the coast of La Jolla, Emily swam with the Leopard sharks, which are known to be friendly and rarely bother swimmers.

"No, I mean they could if they got excited, but they are pretty benign. They are definitely a friendly species of shark for sure," said Emily, or so she hoped.

Emily spotted a Leopard shark with a large fishing hook stuck in its mouth and decided to reach out to remove it. I asked her how big the shark was.

"It was probably as big as me, you know, about a five-and-a-half foot shark maybe," Emily said.

Her first attempt to remove the hook was unsuccessful, so she waited for the shark to circle back for a second attempt.

I've heard some far-fetched fishing stories in my life, which is why thousands of Emily's pictures and past adventures offer all of the credibility I needed.

"I do this crazy thing called sw+amping. It's swim camping," said Emily.

In Hawaii and Catalina, Emily and her friends swim their camp gear to pockets of paradise inaccessible by cars.

"So, it's like backpacking. Like you have everything in a backpack, but we tow it all on a sled," said Emily.

Emily is a married mother of three. Her children are 17, 15, and 12 years old. She is also a college professor of web development for the San Diego Community College District.

She showed me pictures that proved her shark story that she thought had ended without fanfare. After Emily unsuccessfully tried to remove the hook from its mouth a second time the shark came back again.

"Then about 10 minutes later, I felt something kind of bump my leg and I looked back, and it was that shark and I was like 'okay this shark is asking for help'. You know, I just felt like it wants me to get this thing out," said Emily.

RELATED: Captain Rollo: Kids who've never had it, get chance to see the sea

She figured the third time was a charm, so she waited for the shark to pass one last time.

"I was able to grab the hook and it popped right out and I was so excited! I was like, 'oh my gosh, this is the best feeling' and I just felt like I was able to remove this huge hook from the shark's mouth," said Emily.

She figures you could die from a car crash or cancer on land, which is why underwater, she'd risk it all over again to help that shark hook, line, and sinker.

She told me, "I don't have a death wish. I just feel like that is my safe spot."