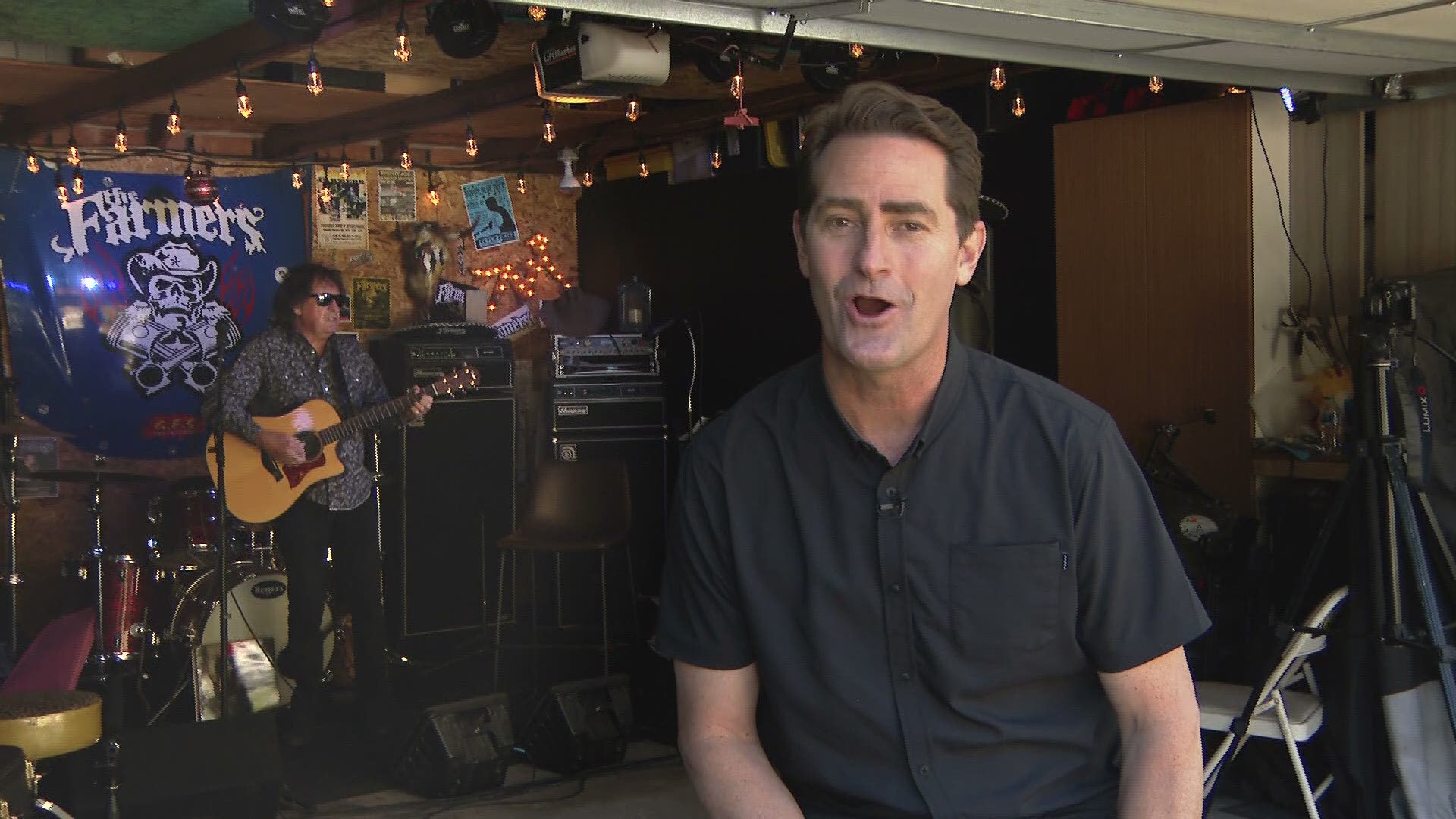 EL CAJON, Calif. — We're celebrating the Grammy Awards with some of San Diego's most memorable musicians. In this Zevely Zone, I caught up Jerry Raney from The Beat Farmers as he and his bandmates prepare to re-release two classic albums. First of all, in case you need an introduction, Jerry Raney is music royalty in San Diego. The singer-songwriter has shared a stage with the likes of Chuck Berry, ZZ Top, Dwight Yoakum, BB King and more. But Jerry is best known for his music with The Beat Farmers in the mid-'80s.

"This is the first album called Tales of the New West," said Jerry while flipping through the band's albums. "That's Buddy Blue, Rolle Love, Country Dick and that's me with the dog over here," said Jerry who told me he grew up poor in El Centro. "We didn't have anything. I didn't have a father. My mom and four kids we couldn't even afford our own furniture," said Jerry. His family couldn't afford a television, but he had a radio. "I was listening to Buddy Holly and Richie Valens and Elvis," said Jerry who moved to El Cajon where eventually The Beat Farmers were born.  "With The Beat Farmers everything just kind of rolled into place," said Jerry.

The band shot several stories with News 8's Larry Himmel and in 1989, News 8's Gina Lew took a rowdy road trip with the boys. Country Dick sported a raincoat and convinced the crowd to douse him with beer.

"Yeah, he did it all of the time," laughed Jerry.  We showed him several of our News 8 archive stories. "Some people just got no sense of humor. I do. We all do in the band," said Country Dick in one of the stories. In 1995, Country Dick died on stage during a performance. "We played three songs and Country Dick slumped over the drums," said Jerry.

In 2006, Buddy Blue died from a heart attack at his home in La Mesa, California. He was 48. The Beat Farmers now go by the name The Farmers. "This is Corbin you guys, he sings in The Farmers with me," said Jerry. Corbin Turner grew up a Beat Farmer fan. "He made me sing a song and then another one and the next thing you know I end up at band practice and 15 years later, here we are," said Corbin.

On April 2nd, The Beat Farmers classic 1985 debut album, TALES OF THE NEW WEST will get re-released with a second album, LIVE AT THE SPRING VALLEY INN.  "It's a neat album," said Jerry.  Both classic albums will be combined. "Right, they are going together. It's going to be a re-releasing of this one, but another little disc of Live at the Spring Valley Inn and it's got 21 songs on it," said Jerry.

The Beat Farmers toured the U.S., Canada, and Europe. Jerry showed me his old road case that tells a story in itself with stickers that read "Homer, Alaska", "Keep Portland Weird" and my favorite "Spanos Sucks."  The band was signed to the same record label as Tom Petty. "Our stuff would star going up the charts and we were getting recognition and then all of a sudden Tom Petty's album would come out and all of their promotion money would go into that," said Jerry who played a few songs for us that sounded a lot like Tom Petty who shared the same musical influences. Jerry accepts those comparisons as a compliment and at age 72, rock royalty is ready for an encore performance.

The band's deluxe reissue will contain two discs with a 24-page booklet that includes rare photos and other images. Also included are liner notes by the reissue's producer and early champion Dan Perloff, who discovered the band while attending San Diego State University and brought them to the attention of Rhino Records executive Gary Stewart. The band back then had Jerry Raney, Buddy Blue, bassist Rolle Dexter and drummer-singer Country Dick Montana. "In a perfect world The Beat Farmers would have been huge, but that’s not how the business works," Dan Perloff wrote in the liner notes. "Has this album stood the test of time? In my humble opinion, I believe that the answer is a resounding yes and this album sits high up on the American Roots Rock Pantheon."