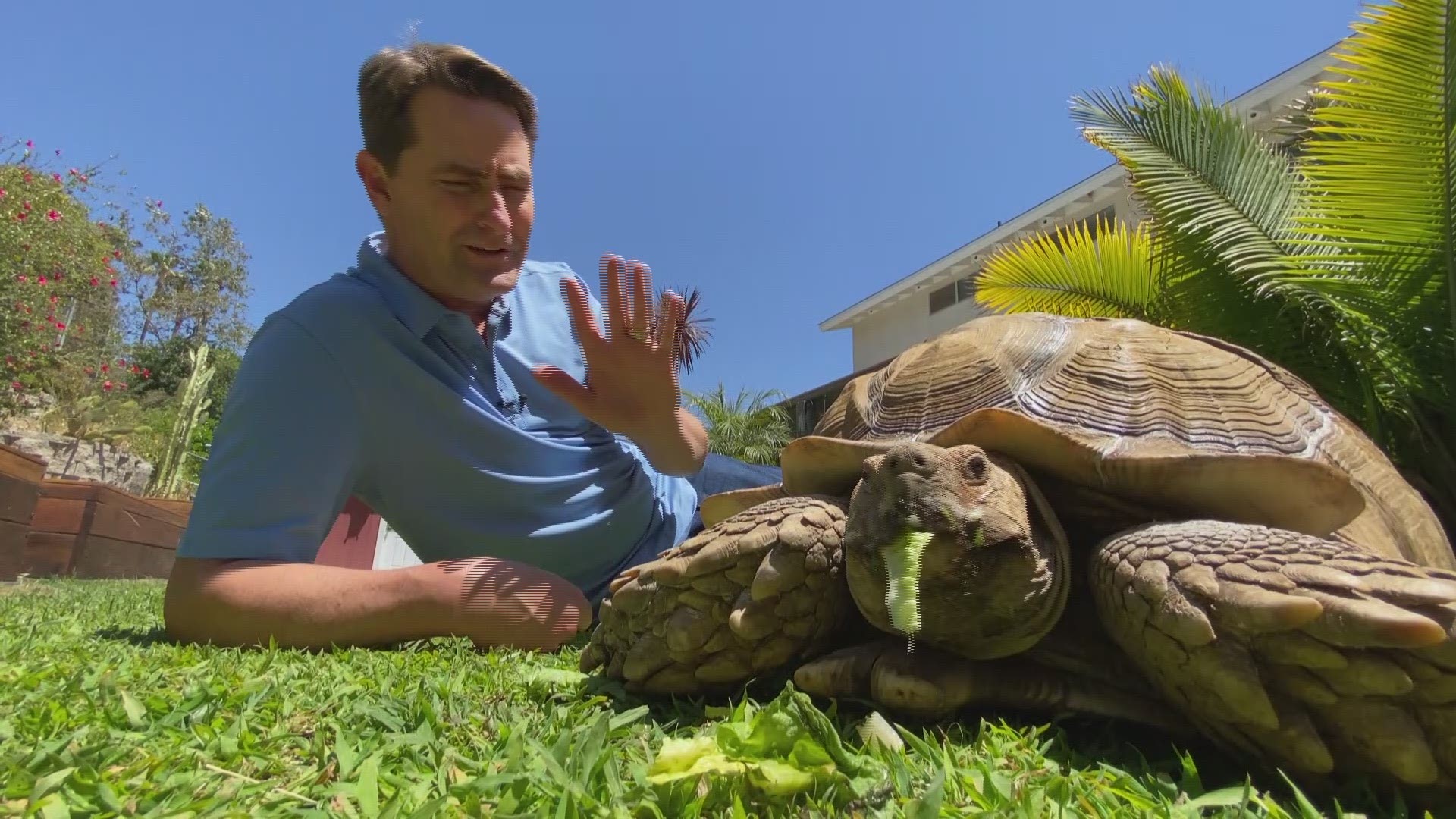 VISTA, Calif. — So you say you'd like to adopt an animal, but you're not a cat or dog person? The San Diego Turtle and Tortoise Society offers the perfect pet for people looking to slow things down. Volunteer Terry Robinson's turtle sanctuary is in Vista, but there are five fostering facilities in the county that would make anyone green with envy. "I've got about 50 in the yard and about 15 or 20 are available for adoption," said Terry while pointing out a few of his favorites. "His name is Breadcrumb, that's Hokey Pokey," laughed Terry.

His grandchildren, Eliza (10) and Noble (14) say grandpa's home is basically like a zoo. "He's got turtles and tortoises galore back here," said Noble. A large tortoise Hokey Pokey was coming our way, but the children did not get nervous because they've learned to not wear the color red, especially on their shoes. Photojournalist Scott Hall was about to get nibbled. He apparently did not get the memo. His shoes have red soles. "Oh, ha, ha, ha," laughed Scott. "Thanks for the warning."

If you want to want to adopt a tortoise, you'll need a well fenced yard, a mix of sun and shade and lots of patience, some tortoises can live to be 150 years old.  Terry told us turtles and tortoises go missing quite often.

"All of the time they are escape artists, every one of them they all want to get out and go. They are not like a cat or a dog where they come home to eat, they can eat anywhere they are and they just love to explore," said Terry.

Every year, about five hundred of these critters either go missing or get relinquished by their owners in San Diego County. Many end up at Terry's house where they find a big heart and humor. "Well on my birthday I have a shell-abration," said Terry. "Why did the turtle cross the road? To get to the Shell station."

So, if you're looking for a new, old friend consider a turtle. "These are the last living dinosaurs on earth," said Terry. "These guys were around 220 years ago, according to paleontologists they look just the same."

They are also type of pet that won't make a peep. "They don't bark or keep the neighbors awake at night," said Terry. The San Diego Turtle and Tortoise Society needs people to come out of their shells and rescue reptiles.

Terry says if you become a member of the San Diego Turtle and Tortoise Society adopting many of the animals is free.  For more information click here.