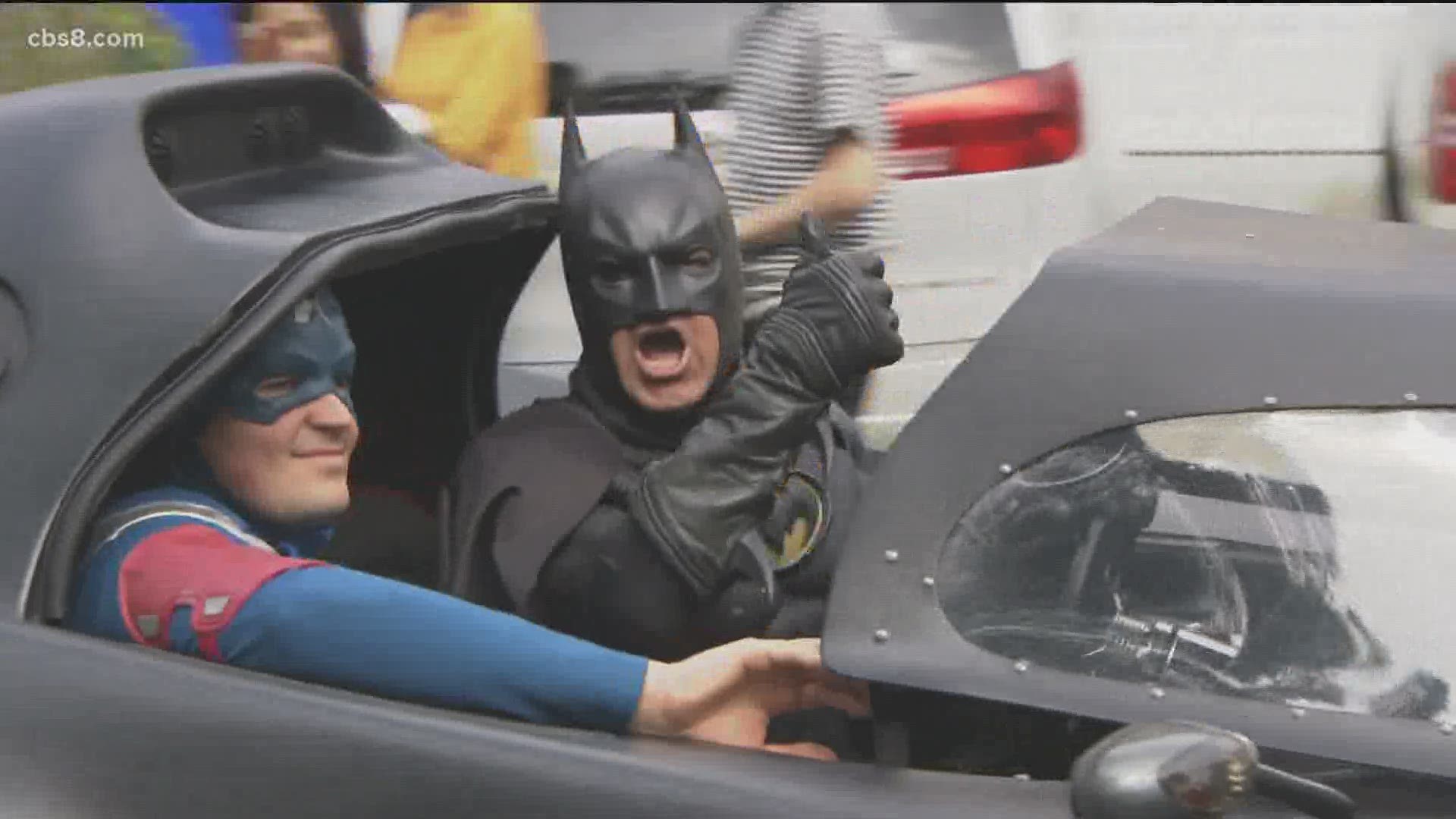 SAN MARCOS, Calif. — Sometimes, you just need a superhero to make things better. In this Zevely Zone, I met a Valley Center father who wants to come to your rescue.

Blaring the Batman theme song, Chris Banner pulled up in his Batmobile.

"Look at that," said one excited father in the San Marcos neighborhood, which is called Williamsburg Estates.

"There he is. Did you see him?" asked a mother to her toddler.

"Alright, bare with me. Batman jumped off a building and his knee is a little screwed up. Whoa, how's everybody doing?" said Chris Banner, whose authentic suit and car are mesmerizing.

In case you're wondering who sent up the "bat signal," it was Renee Gomez, a registered nurse.

Batman was enforcing the social distancing guidelines despite the hysteria. Renee called Batman because she felt bad for kids in her neighborhood who spent birthdays without friends.

"I just [thought] this would be a great opportunity to make them happy," said Renee.

Neighbors sang for kids, like Jack Laforte, who was celebrating his 15th birthday.

"That was pretty crazy. It's not everyday you get to see Batman in a Batmobile, you know," said Jack.

Another child, Joshua Le, told me, "I'm really excited that he's here. We need something positive, you know?"

Batman brings out the kid in all of us.

"This is a great idea for the whole neighborhood and the family. I am sure glad that they arranged for him to come out and give everyone a break from everything that's been going on lately," said neighbor Bob Stern.

Batman is wearing his trademark suit with amazing abs. I asked a father on the street, "You feel like you need to start doing some push ups and sit ups?"

Lance Watters told me, "I've been doing a challenge, but I can't look like him. Does he look like that underneath? That's the real question."

Probably not. By day, Batman is just Chris Banner, a normal husband who married his own Batwoman, built his own Batmobile from the ground up, and raised three kids. One of which is his sidekick, Jacob, who as a small child used to be Robin and now rides shotgun as Captain America.

"It brings me joy and happiness. I love doing this. That is why we are out here," said Banner.

During the work week, Chris drives a tractor, creating defensible space from wildfire, and on the weekends, he's mowing down bad guys.

"I was not expecting this, so this is amazing. It seems like everyone is really excited," said Stephanie Von Wida with her 2-year old Kenna.

The next time you're feeling cooped up from coronavirus, instead, spread your wings with a caped crusader.

"It's funny how many people are in their pajamas at three o'clock in the afternoon and they have no clue. Just stay in them," said Banner.

If you'd like to send up your own Bat Signal, the appearances are free. You can contact Chris Banner at San Diego Weed Control.

RELATED: 'Background checks' are a new hobby when watching television