Going to the beach with your family can be a real chore - carrying beach chairs, umbrellas, and other gear. What if somebody would haul all of the gear for you? 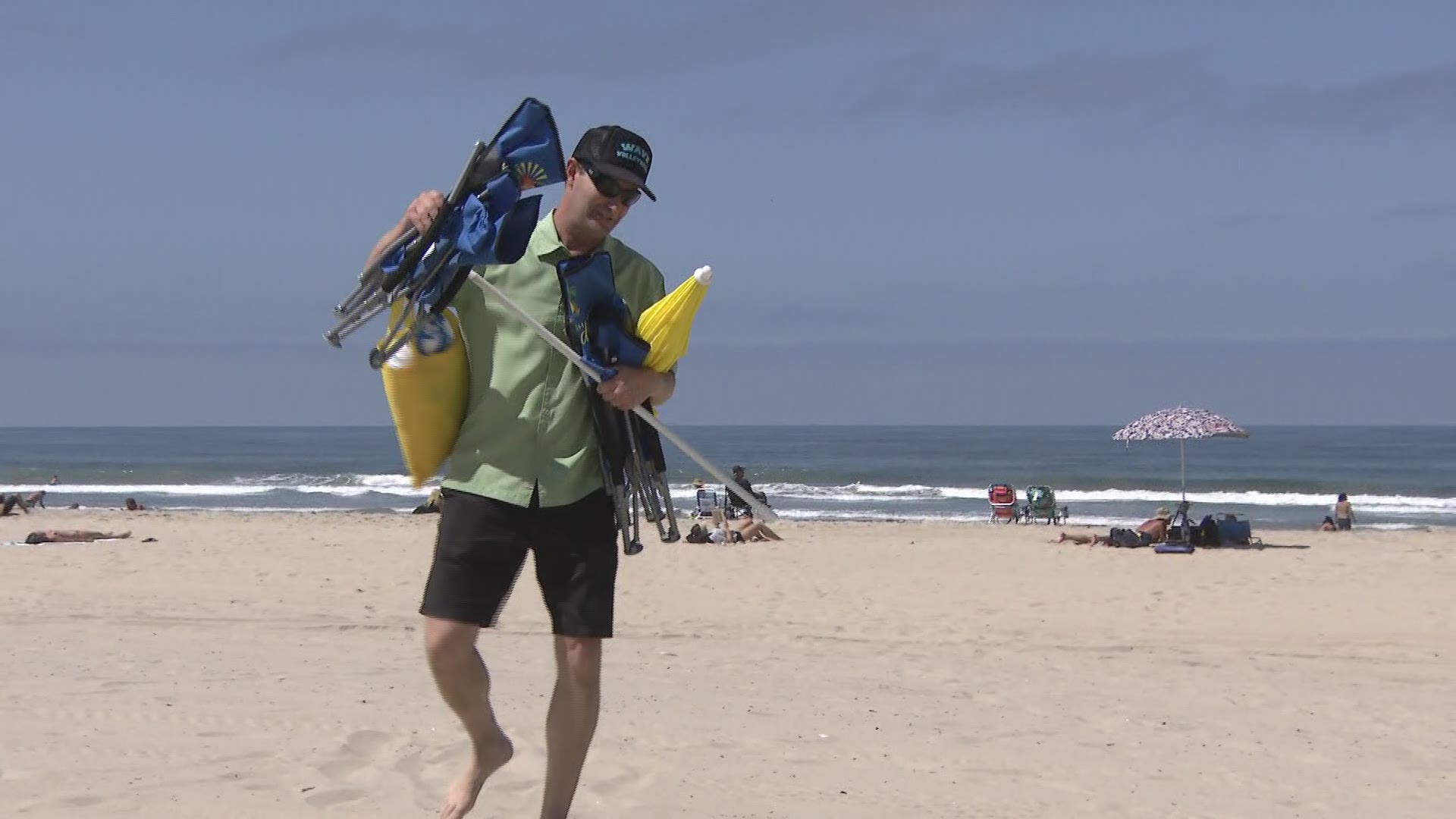 SAN DIEGO — When you need a ride, you can order one on your phone with apps like Uber and Lyft, but did you know there's an app for when you need beach gear? In this Zevely Zone, I traveled to Pacific Beach where the high-tech sands of time are changing.

Going to the beach with your family can be a real chore - carrying beach chairs, umbrellas, beach bags and other gear. What if somebody would haul all of the gear down to the beach for you?

I went to meet Anthony DeJulio. He moved to San Diego from Boston and he is here to make his mark. Anthony has a start up in the sand. His company Beach Bandits wants to deliver everything you need.

The 29-year-old business man wants you to order everything you need to have a great day at the beach on your phone and showed me how the app works.

"Four chairs, four beach mats, one umbrella, one speaker but also one game is included so you get a 'Spikeball' or 'Corn Horn,' football, paddle ball -  whatever you want included in that," said Anthony.

A family of four walked by: two little kids and the parents loaded down with all of the gear including a cooler.  Anthony says why start your day like that?

I asked a beach-goer what she thought of the concept. Carly Frederick just moved here from Washington, D.C., and doesn't own a lot of beach gear.

"I think it's going to be very popular. I think tourists are going to love it because a lot of people fly in and they cannot bring all of their stuff and they don't want to buy it because they can't bring it back, so they end up buying it and just throwing it away," said Carly.

Or even worse, tourists litter the beach. Rob Sorensen from the PB Surf Shop says he sees it all the time.

"When they bring stuff down here and their umbrella busts and their chair busts, the first they do is just leave it. You know what I mean? And I see a lot of abandoned umbrellas and chairs and it does accumulate you know," said Sorensen.

I talked to another beach-goer.

"How come a couple of San Diego guys could not have thought of this?" I asked.

"Beach Bandits is an on-demand beach rental delivery service through the use of an app. It could be great for tourists, but even more convenient for locals who are familiar with the hassles of getting to the beach and lugging their gear around," said Anthony. "Now, users can Uber/Lyft to the beach with nothing but their swimsuit and not have to worry about parking, have everything the need for a full beach day, and be free to go about their day (maybe a restaurant or bar) without being tied to their own gear."

Orders can be placed on the spot with up to a 15-minute window for delivery or in-advance the night or days before their beach outing. The company is currently operating at Pacific Beach with plans to soon service Mission Beach.

Anthony was ready to close this Zevely Zone sale.

"This is called the Pelican Package?" I asked.

It came with two chairs, two towels, two beach mats and a speaker for music. The price: $19 for three hours.

"I would say it's a no-brainer," said Anthony.

"What did you study in college?" I asked Anthony.

"Business and marketing," he said.

For more information on Beach Bandits visit their Instagram page.