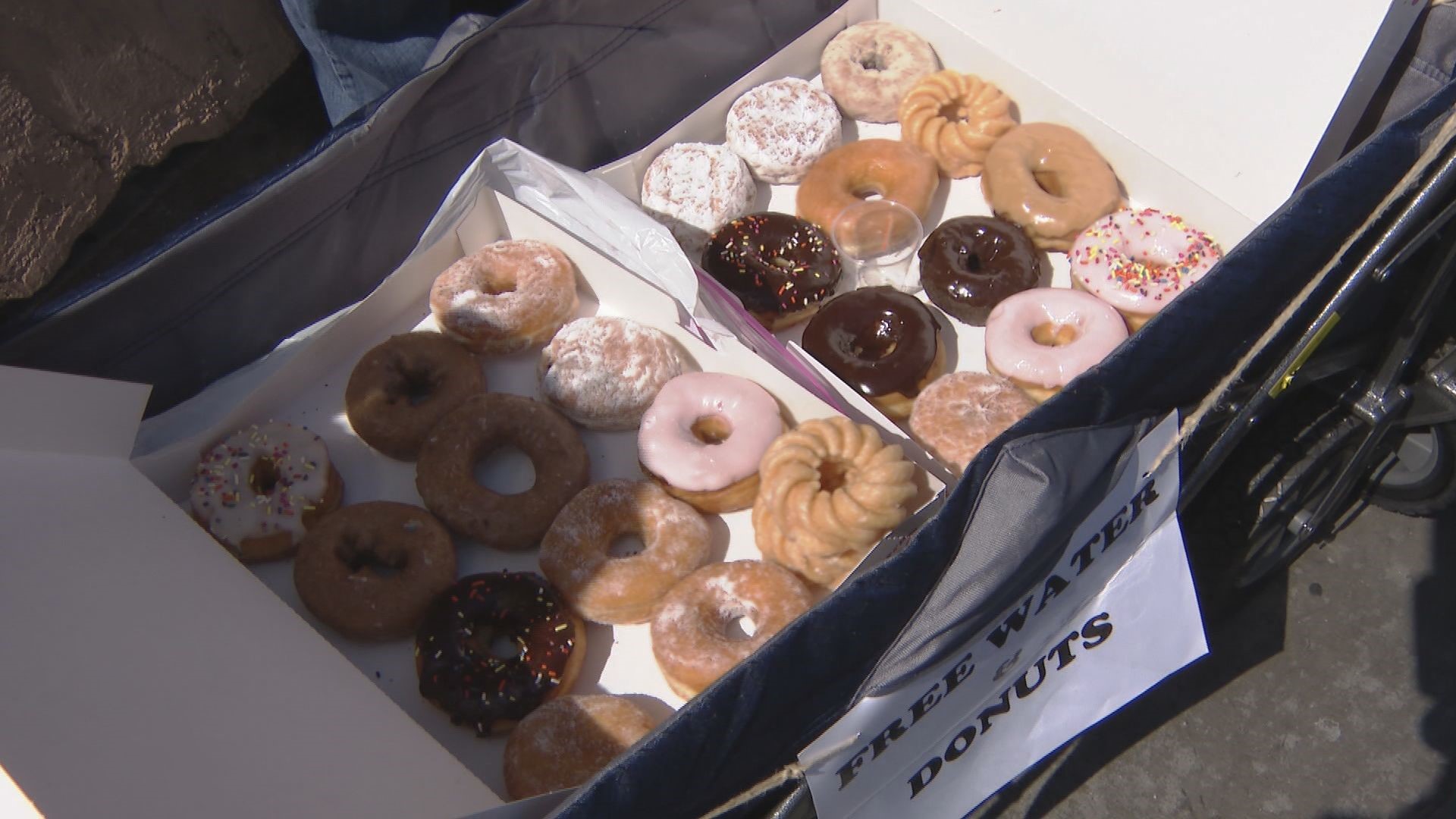 SAN DIEGO — A Chula Vista teenager is trying to make the world a sweeter place for the homeless. Jeff Zevely from the Zevely Zone traveled to the East Village to meet 15-year old Andrew Cowling.  "Hey guys we have two donuts over here," said Andrew instructing several people how to get their hands on his free water and donuts. "The donuts are just to brighten up their day a bit," said Andrew as he and his father and few friends pulled wagons filled with bottles of drinking water and Dunkin' Donuts. "It makes me feel happy that I can make a difference especially with such a big crisis," said Andrew.

About a year ago, Andrew started serving meals at shelters and noticed that many of those meals lacked enough sweet treats at the end of dinner. "The people at the end of the line would never get any desserts and they would get disappointed," said Andrew. So, he thought why not give the people what they want with some water to wash it down. "Oh this is fantastic. This is such a nice thing to do for the community and we are so grateful," said a woman named Kimberly. She is just one of dozens of people lining up for donuts. "How has this changed your day?" asked Jeff.  "This has made my day so much better, ha, ha, " said Kimberly.

I mean who doesn't love a donut or a muffin? According to Andrew's dad, pulling the wagon is becoming a challenge. "Obviously, this is too much for him to pull all by himself so we try to come out with my wife and now he has some of his friends helping," said Randy Cowling.  Andrew is a sophomore at Cathedral Catholic High and he brought his classmate Quinn Conway to help out. "I thought it was a great idea. I mean it's just a little deed that's pretty easy to do that will help the community," said Quinn. Andrew noticed that not only are people thirsty for drinking water but their pets are in need of water too. "When I started this, I was taken aback by the unsanitary and dangerous conditions that the homeless have to endure. What surprised me the most is that the homeless have very limited access to clean drinking water. Some are not physically able to move around to get their own water even if it was available. They are always glad to see our wagons coming around handing out water and donuts, with many asking for two or three bottles to share with their dogs," said Andrew.

Tali Burton is one of the volunteers. He owns eleven Dunkin' Donuts. When he heard about Andrew's mission he decided to donate the donuts. "Anything we can do right? Even just bring attention, bring someone a smile," said Burton.

Tali served in the Marine Corps both active duty and the reserves and his daughter, McKinley, loves being on the front lines. "I just don't why we are doing this, I am just giving them away because I like to. I have no idea why," said the adorable 6-year old.

That's okay, we should just follow the lead of a 15-year old boy.  "It makes me feel happy that I can do something like this," said Andrew.  People like Kimberly say sometimes it takes a teenager with fresh eyes to circle the wagons. "I think it's a kid with great character. A great human being absolutely," said Kimberly.

Andrew started handing out six dozen donuts a week. Now he's up to fourteen dozen donuts a week along with two hundred and eighty bottles of water. Andrew has established a GoFundMe page to help defray his costs.  If you'd like to make a donation, click here. If you'd like to help volunteer, you can contact Andrew via email at andrew.cow@icloud.com.