Scott Wilson, the owner of the park, just fixed up the 34-acre ranch in Valley Center and he's giddy for glamping. 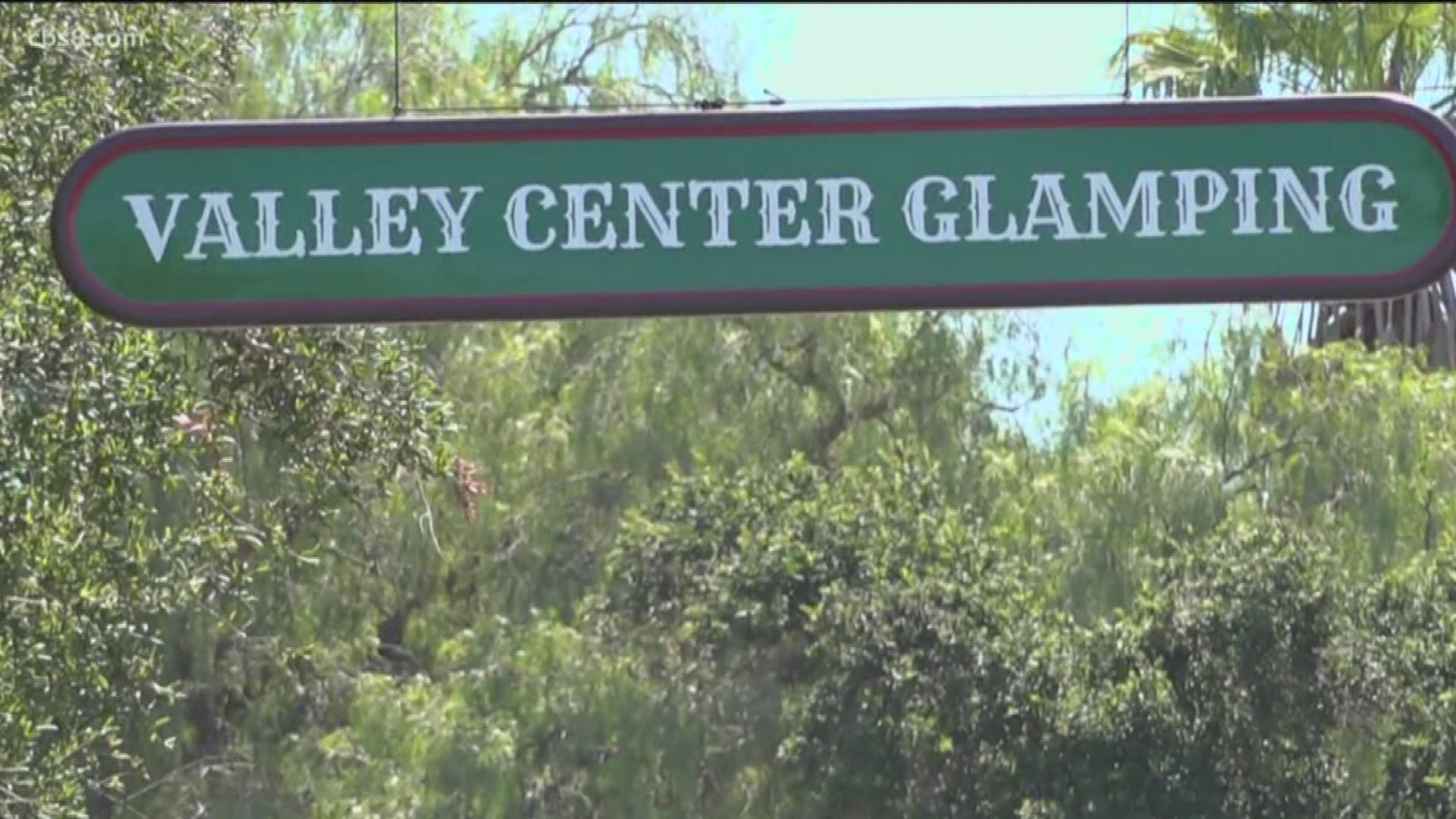 SAN DIEGO — If you haven't heard of glamping, it's glamorous camping for those who want it all, the great outdoors without a great deal of effort.

Scott Wilson, the owner of the park, just fixed up the 34-acre ranch in Valley Center and he's giddy for glamping.

Jeff interviewed him on the deck of his Bahama Suite.

"One morning I woke up and I said to myself, 'wow, I have not done anything spectacular lately and I better think of something fast because it's been several years,'" said Wilson.

Wilson is an entrepreneur who prides himself for being one step ahead.

"Glamping is a new word that's not in the dictionary - yet, that's for sure," said Wilson.

"Well, glamping? Picture a 24-foot deck with your own private patio, with a big old huge tent and as soon you open the tent flaps - luxury hotel room," said Wilson.

Think about all the things, you won't have to pack.

"All you got to do is pack an overnight bag don't forget your toothbrush, show up, set it down and you are done," said Wilson.

He plans on pouring more than a million dollars into the park because when he first spotted this ranch he thought, "Oh gosh, I drove in here and the hairs on the back of my neck stood up and I said 'this is it.'"

Wilson and his girlfriend Marla showed Jeff their park's restaurant.

"Camping is work and glamping is fun," said Marla.

There's also an old church and western town on the property which made Jeff think, they will need a sheriff.

"You look just like a ranger," laughed Wilson as Jeff emerged from a glamping tent in a ranger uniform.

Jeff hopped on a bike and started patrolling, "As your ranger, I should tell you, you can come here to get married, hike or get a massage but there is one rule. No children allowed."

Wilson appreciated Jeff getting the message out and said, "People don't want to spend a couple hundred bucks to experience glamping and hear screaming kids that keep them up all night."

That's because you've got some sleeping to do.

"It's a queen sized bed, night stands, a full sized dresser just to make yourself pretty in the morning," said Wilson showing off the inside of a really nice tent.

"There is an old saying, if you are one step ahead of people you are a genius if you are two steps ahead you are a crack pot. I've always been a crack pot," said Wilson.

The next time you want to rough it, do it in style.

"Camping has always been great, but we are making it really great," said Wilson.

Valley Center Glamping is open for business and you can book your spot now!