A La Mesa man who directed threats at the San Diego and Washington, D.C., offices of the Council on American-Islamic Relations a  year ago was sentenced Tuesday to a year in jail and five years pro... 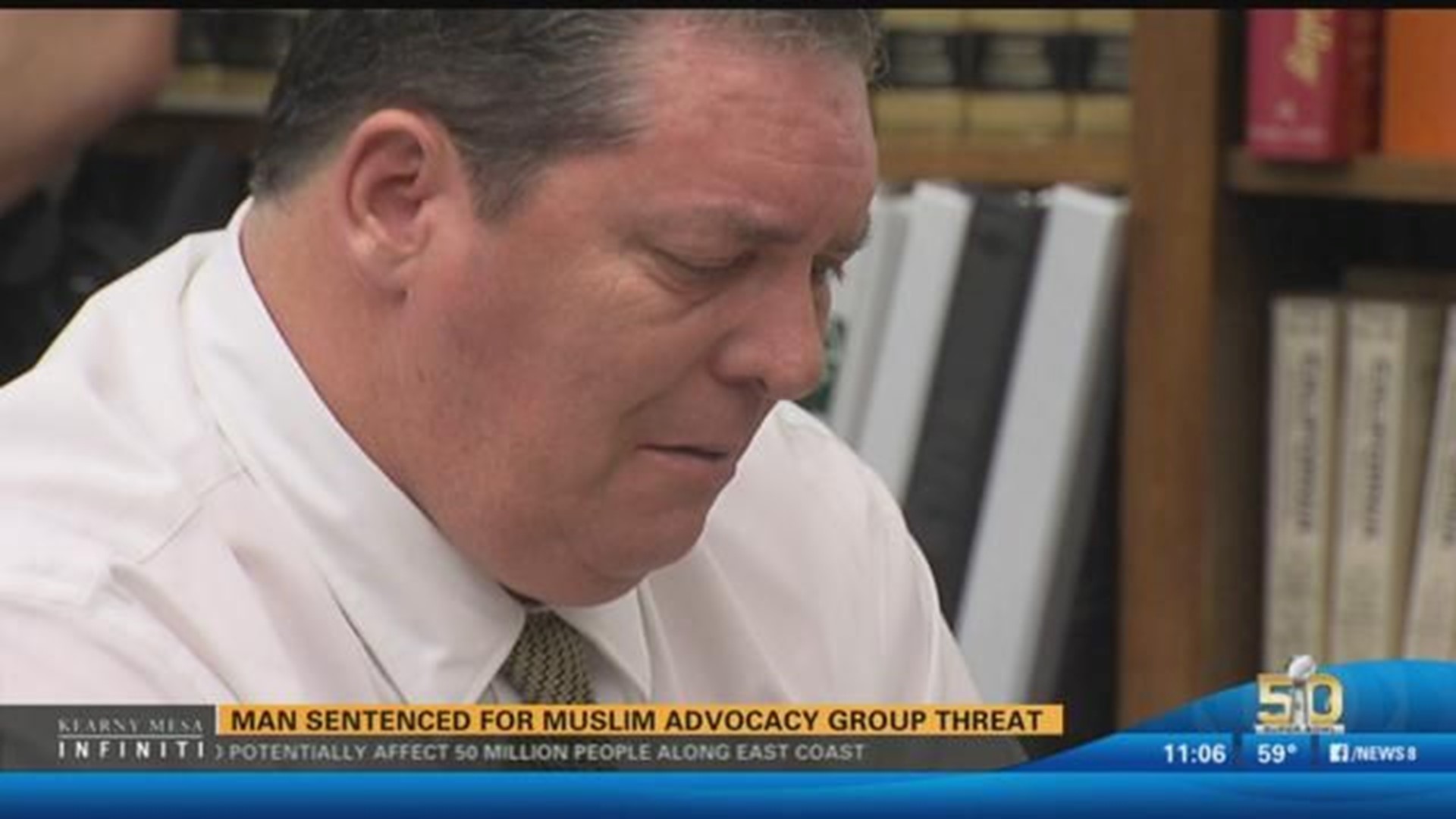 SAN DIEGO (CNS) - A La Mesa man who directed threats at the San Diego and Washington, D.C., offices of the Council on American-Islamic Relations a  year ago was sentenced Tuesday to a year in jail and five years probation.

John David Weissinger, 54, pleaded guilty last August to a charge of making a criminal threat, with hate crime allegations, and possession of an illegal assault rifle.

"It's hateful, it's caustic, it's inflammatory, it's dangerous, it's illegal, it's inexcusable and it cannot be tolerated," Judge Timothy Walsh said of Weissinger's behavior.

"One needs to understand that this type of conduct will not be tolerated," the judge said. "His conduct is not going to be treated lightly."

Defense attorney Michael Malowney told the judge that Weissinger is a different man today than when he made the threats.

In the voicemail and email threats, Weissinger used "horrible and evil" words and "once they went out, he couldn't take them back," the attorney said.

Malowney said Weissinger has problems with alcohol, anxiety and depression and had just finished watching a week of Fox News coverage on the Charlie Hebdo massacre in Paris when he threatened the CAIR offices.

"He barks when he's drunk," Malowney told the judge. "He was reeling from depression and anxiety."

A female employee at CAIR's Kearny Mesa office testified during a preliminary hearing last April that she came to work the morning of Jan. 15, 2015, and listened to a threatening voicemail left by Weissinger.

"In no way did we deserve the terror that Mr. Weissinger waged on us," the employee, identified as Jane Doe, said in a recorded statement played in court today. "Domestic terrorism is unacceptable and must be stopped."

The victim said that in the voicemail, Weissinger threatened to shoot her and fellow employees. She said she called police and gave them Weissinger's  name, which she got from caller ID.

The woman testified that she had seen Weissinger hanging around the local CAIR office several times in the weeks before the hate-filled voice message was left.

"He admitted everything," the detective said, testifying that Weissinger told him he was drunk at the time and that it was a "stupid thing  to do."

In the threatening email, Weissinger wrote that he was coming with enough firepower to "kill all of you," Way testified.

"I'm grateful it's over," said Hanif Mohebi, executive director of San Diego's CAIR office. "I want everyone to know that hate messages of any kind are not acceptable, in any way, shape or form."