Marines confiscating bikes of trespassers on base

The Marines are changing their tactics when it comes to cyclists from Mission Trails Park who are trespassing onto MCAS Miramar. 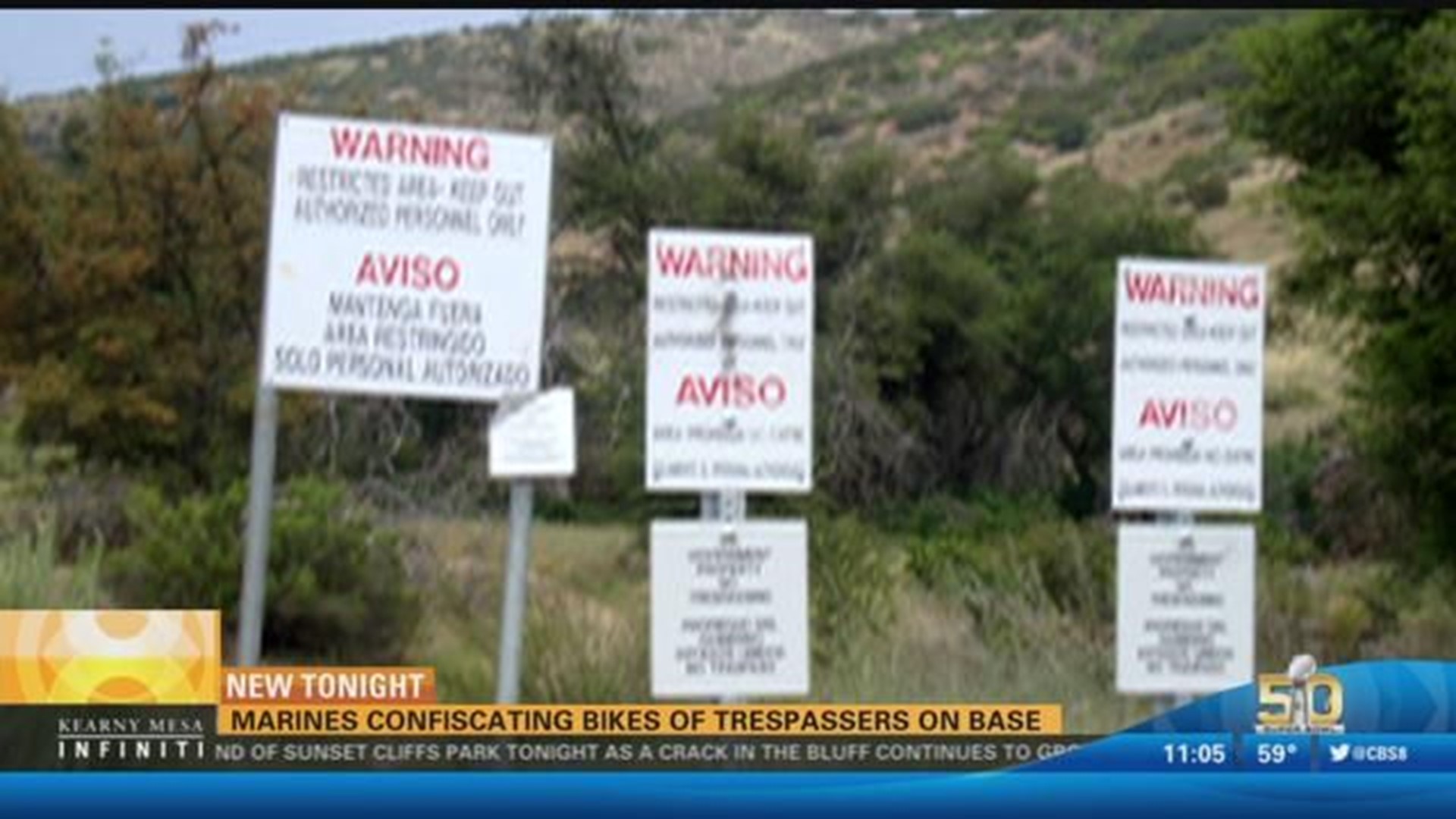 SAN DIEGO (CBS 8) – The Marines are changing how they handle of cyclists from Mission Trails Park who are trespassing onto MCAS Miramar property.

Most of the trails north of State Route 52 are owned by the U.S Marine Corps Air Station Miramar, yet mountain bikers have been riding the trails for years. Now, military police armed on ATV’s will begin to confiscate bikes near Mission Trails.

Cyclists said it has never been a problem, but the military said with a shooting range nearby too many cyclists were crowding the trails making it dangerous.

“Everyone that got caught and I was one of them, what? We didn't see any signs,” said mountain biker Darren Laschell.

Laschell and his friends were stopped by the military police on the Eastern edge of Sycamore Canyon on Sunday, about three miles from the shooting range. The group had to leave the bikes behind and hike two miles out of the canyon in their cleats.

“It angers you a lot, especially if you are an avid mountain biker,” said Laschell.

San Diego mountain bikers have been riding Mission Trails for years, though signs are posted, many have knowingly been trespassing on the military land.

“Everybody that I have ever ridden with is fully aware they are on federal property,” said mountain biker Steve Gillespie.

During the San Diego Mountain Bike Association Board Meeting Wednesday night, the Commanding Officer for the MCAS Miramar told riders the $500 fines were not working.

“They are not paying the fines and they are coming right back,” said Col. Jason Woodworth, Command Officer for MCAS Miramar.

“I had illegally and willfully been trespassing on government property for 15 years and my number came up,” said Gillespie.

The colonel said with the exploding ordinances from the 50’s and heightened security, there is a huge safety risk.

“We've had an increase in the amount of mountain bikers coming through the air station and there are live shooting ranges,” said Colonel Jason Woodworth.

On their Facebook page, the San Diego Mountain Bike Association posted a warning and a map of where bikers can ride, highlighting what is military land.

Col. Jason Woodworth said every time the range is shut down, it takes time away from military training, costing $10,000.

Putting up a fence across the 2,300 acres would cost too much, according to Col. Jason Woodworth.

The military said it will work to make sure there is clear signage.

The SDMBA is meeting on February 1 at 6 p.m., at 8148 Mercury Court to talk about bike trails and the issue of riding on military land.