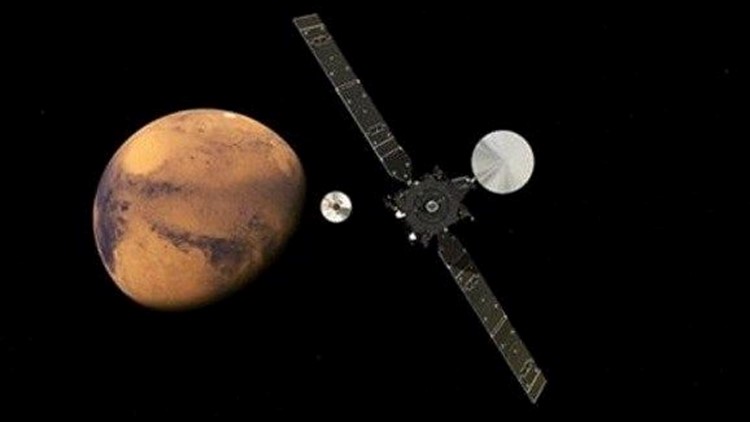 BERLIN (AP) — The European Space Agency's experimental Schiaparelli probe entered the atmosphere of Mars on Wednesday, and scientists awaited confirmation that the craft had touched down safely. Its mother ship, which will analyze the atmosphere, went into orbit around the red planet.

Schiaparelli was released from the mother ship, the Trace Gas Orbiter, on Sunday. Scientists said the gentle approach would turn into a six-minute hell ride when the probe plunged into the hot, dusty Martian atmosphere and hurtled toward the surface at 21,000 kilometers an hour (13,050 mph).

If all went to plan, Schiaparelli would deploy a parachute and then thrusters to slow down to 10 kph (6.2 mph) before hitting the surface.

Don McCoy, the manager of the ExoMars project of which the two craft are part, said some data had been received from the lander confirming its entry and the deployment of its parachute. More information was expected later Wednesday.

"We can't conclude the real status of (Schiaparelli) at the moment but indeed it did enter the atmosphere," McCoy said at mission control in Darmstadt, Germany.

Landing a spacecraft on Mars is notoriously difficult and several past missions have failed, including the European Space Agency's previous attempt in 2003 with the rover Beagle 2. It made it to Mars but its solar panels didn't unfold properly, preventing it from communicating.

While Schiaparelli has some scientific instruments on board, its main purpose is to rehearse the landing and test technology for a European rover mission to Mars in 2020. NASA has successfully placed several robotic vehicles on the planet, including the Opportunity and Curiosity rovers.

Schiaparelli left for Mars in March aboard a Russian rocket together with the Trace Gas Orbiter.

The orbiter, which also has NASA-made instruments on board, will analyze methane and other gases in the atmosphere.

The prospect of finding even microscopic organisms on Mars has excited scientists for some time, but so far none has been discovered.

The ExoMars program, which comprises the current and 2020 mission, is ESA's first interplanetary mission jointly undertaken with the Russian space agency Roscosmos.