In his latest jab at the media, President Donald Trump on Sunday tweeted a mock video that shows him pummeling a man in a business suit — his face obscured by the CNN logo — outside a wrestling ring. 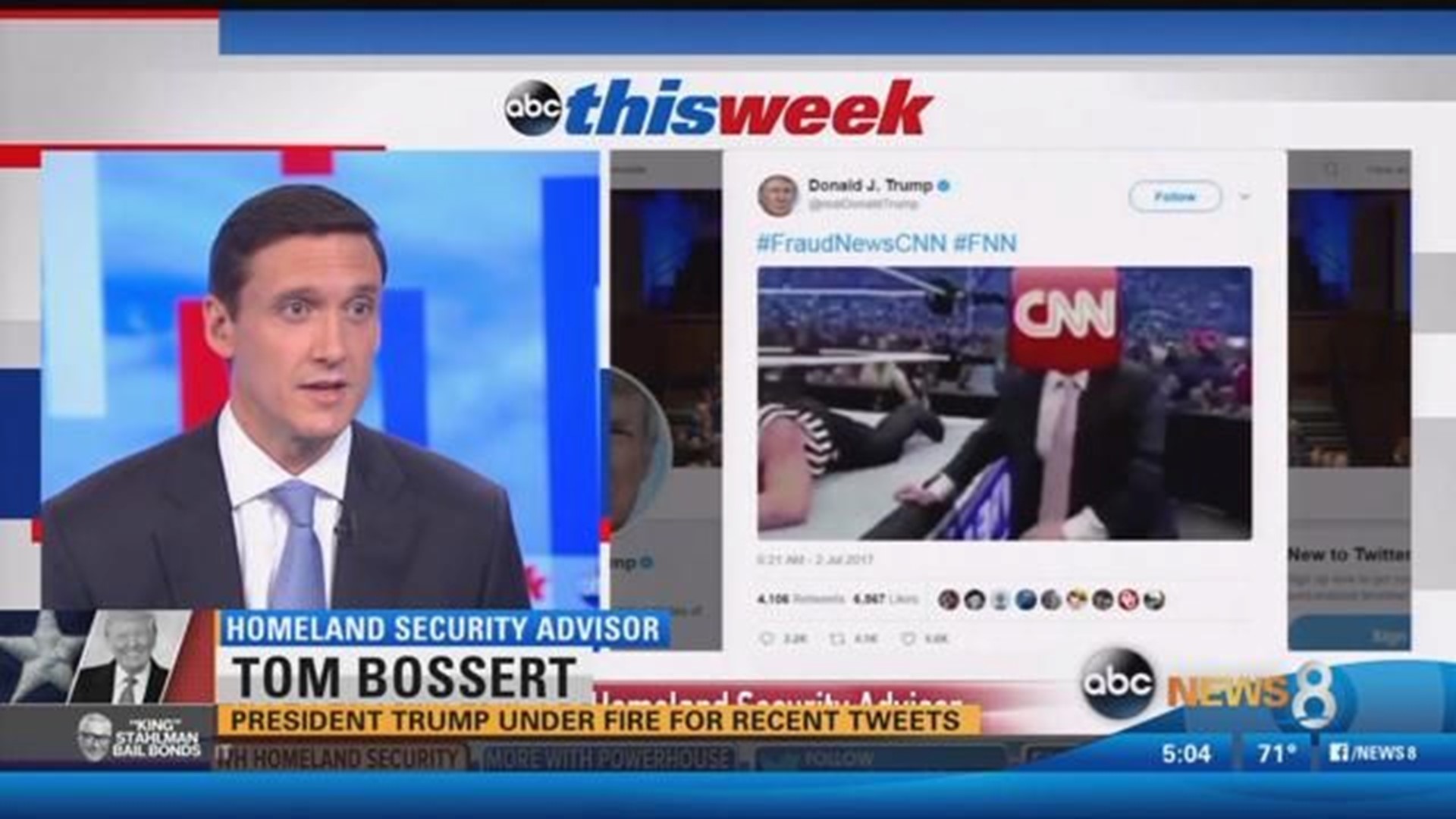 BRIDGEWATER, N.J. (AP) — In his latest jab at the media, President Donald Trump on Sunday tweeted a mock video that shows him pummeling a man in a business suit — his face obscured by the CNN logo — outside a wrestling ring.

It was not immediately clear who produced the brief video, which appears to be a doctored version of Trump's 2007 appearance on World Wrestling Entertainment Inc. The 28-second clip was posted on Trump's official Twitter account, with the message: "#FraudNewsCNN #FNN."

The president in the past has branded the media as "the opposition party" and "the enemy of the American people." He has taken particular aim at CNN, calling the network "fake news."

Trump stayed on the attack later in the day, stating on Twitter that "the dishonest media will NEVER keep us from accomplishing our objectives on behalf of our GREAT AMERICAN PEOPLE!"

Bruce Brown, the executive director of the Reporters Committee for Freedom of the Press, condemned the video as a "threat of physical violence against journalists." He said Trump's tweet was "beneath the office of the presidency."

A White House aide insisted the tweet should not send a chill across the media landscape.

"I think that no one would perceive that as a threat," homeland security adviser Tom Bossert said. "I hope they don't. But I do think that he's beaten up in a way on cable platforms that he has a right to respond to."

CNN accused Trump of engaging in "juvenile behavior far below the dignity of his office."

White House officials traveling with Trump during his weekend stay at his New Jersey golf club did not immediately respond to questions about who made the video or about any message the president might have intended to send.

The video appeared to be a doctored version of an appearance Trump made on a World Wrestling Entertainment Inc. show called "Battle of the Billionaires" in 2007, in which Trump appears to attack WWE CEO Vince McMahon.

McMahon's wife, Linda, who founded and built the company with her husband, now heads the Small Business Administration for Trump and was a generous benefactor to his campaign.

The video was posted several days ago by a Reddit user with the title, "Trump takes down fake news." It was not clear whether that was where it originated or where Trump found it. Still, the user wrote Sunday about being "honored" Trump had tweeted the video. The user who posted the video has a history of posts using anti-Muslim and anti-immigrant language.

The president's verbal shots against news outlets and individual members of the media have grown increasingly personal in recent days even as lawmakers in both parties say the insults only threaten to undermine his political agenda.

Trump has singled out MSNBC host Mika Brzezinski and CNN for some of his most biting criticism, and hardly is backing down in the face of widespread condemnation from the political class.

"The fake media tried to stop us from going to the White House, but I'm president and they're not," Trump told a supportive crowd Saturday in Washington.

A White House spokeswoman, Sarah Sanders, told reporters last week that Trump "in no way, form or fashion has ever promoted or encouraged violence."

CNN, in its response to the video posted Sunday, said it was "a sad day when the president of the United States encourages violence against reporters. Clearly, Sarah Huckabee Sanders lied when she said the president had never done so."

CNN's statement noted the weighty list of issues before Trump — an overseas trip this week that includes a meeting with Russian leader Vladimir Putin, the stalled health care bill, the threat from North Korea. Instead of focusing on those matters, CNN said, "he is involved in juvenile behavior far below the dignity of his office. We will keep doing our jobs. He should start doing his."

Trump's latest tweet came as Republicans and Democrats have been imploring him to focus on leading the country, rather than exploding on social media.

For days, Trump has focused his ire on Brzezinski and Joe Scarborough, co-hosts of MSNBC's "Morning Joe."

Trump took to Twitter on Thursday to call Brzezinski "crazy" and contend she was "bleeding badly from a face-lift" when he once saw them at his Florida estate. The comment was decried as sexist and vulgar by many Democrats and Republicans.

The MSNBC personalities said Friday that Trump was lying about their December encounter and they questioned his "unhealthy obsession" with their program.

The hosts, who are a couple onscreen and off, also said the White House told them a damaging National Enquirer story about their relationship would "go away" if they called the president and apologized for harsh commentary. Trump quickly disputed the claim on Twitter.

Gov. John Kasich, R-Ohio, said he hoped Trump's family would talk to him and say, "Knock it off."

"The coarseness doesn't help anybody," he said.

Bossert and Kasich appeared on ABC's "This Week." Cassidy was on NBC's "Meet the Press."