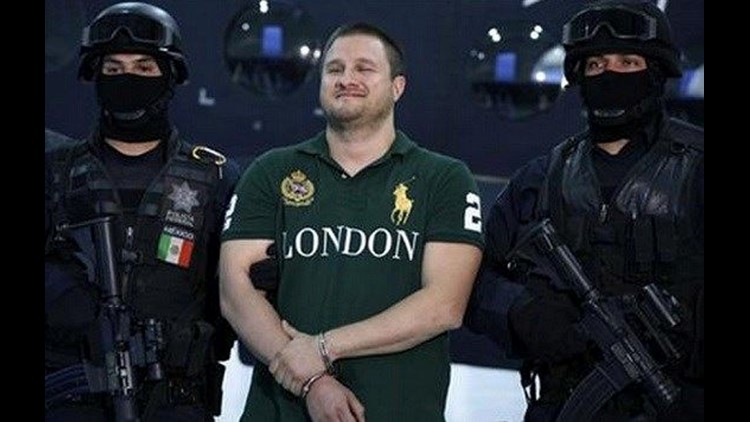 Mexico extraditions part of new working relationship with US

Mexico extraditions part of new working relationship with US

MEXICO CITY (AP) — Mexico just extradited 13 people wanted in the United States, including two top drug traffickers, because of a new streamlined process between the two countries — and not because of the recent escape of Joaquin "El Chapo" Guzman, officials said.

Jose Alberto Rodriguez, head of the international section of Mexico's Attorney General's Office, denied on Thursday that the extraditions were a response to the embarrassing July 11 escape from prison by Guzman, Mexico's most-wanted drug lord.

While it's not unprecedented, 13 is the largest number of extraditions in one day under the administration of President Enrique Pena Nieto, who took office in December of 2012. Rodriguez told The Associated Press that the extraditions had been in the works independently of Guzman's escape, and that U.S. and Mexican authorities had earlier reached an agreement to speed-up the process.

"With or without the escape of 'Chapo' Guzman, these extraditions were going to happen," Rodriguez said.

Many experts agreed there was no direct relation — extradition requests take years to complete. But they said the timing can be attributed to the rule-of-law problems that Mexico has been experiencing, illustrated by Guzman's escape and the 2013 early morning release from prison of Rafael Caro Quintero, the man convicted in the 1985 killing of U.S. DEA agent Enrique Camarena, despite having charges pending against him in the U.S. Mexico also just passed the one-year anniversary of the disappearance of 43 teachers' college students at the hands of police working with a drug gang. Their whereabouts remain a mystery.

"I can't help but question if the timing of this was a way to deflect in the press from all the other things going on," said Juan Masini of Masini Global Group, a former Justice Department official at the U.S. Embassy in Mexico City.

Other experts see the extraditions as Mexico realizing that it needs its neighbor's help on security issues. When Pena Nieto first took office, his administration reversed the open cooperation that Washington experienced under former President Felipe Calderon. The number of extraditions dropped with the closing down of access to Mexican officials, apart from a "single window" in the Interior Secretary.

Extraditions in Calderon's last year were 115, but dropped to 54 in the first year of Pena Nieto's administration.

"Extraditions are not a good measure of relations overall, but I think it's symbolic especially for people working in law enforcement. It's been seen in recent years as an important metric," said David Shirk, associate professor in the Department of Political Science and International Relations at the University of San Diego. "For those who felt relations had gone downhill, that drop in extraditions seemed to be significant."

A U.S. Justice Department statement said Wednesday's extraditions were part of a new coordination effort between Mexico and the U.S. to fight organized crime, which arose from a June meeting between U.S. Attorney General Loretta Lynch and her Mexican counterpart, Arely Gomez.

Among those sent to the U.S. were Edgar Valdez Villarreal, known as "La Barbie," a top lieutenant to the late Arturo Beltran Leyva who later led his own faction of the Beltran Leyva cartel, and Jorge Costilla Sanchez, known as "El Coss," an alleged former leader of the Gulf Cartel and Los Zetas.

The group also included Jose Emanuel Garcia Sota, who is charged in the 2011 killing of U.S. Immigration and Customs Enforcement agent Jaime Zapata. Three suspects charged in the March 2010 murders in Ciudad Juarez of U.S. Consulate employees also were sent to the U.S.

Under the agreement Rodriguez outlined, some administrative steps that took 15 days will now take five, but he added that because suspects have the right to appeal, the extradition process will not take less than a year. He also said that Mexico will still make sure that national authorities have obtained all the information from the suspects needed to solve local crimes before sending them north.

The United States filed an extradition request for Guzman about 2½ weeks before his escape. His lawyer told several media outlets in August that his flight was a direct result of learning that extradition had become imminent.

For some analysts, the recent extraditions cannot be understood without considering Guzman's escape.

"It's clearly a recognition on the part of the Mexican government that they can't depend on their prison system after Chapo, they don't want a future embarrassment," said Duncan Wood, director of the Mexico Institute at the Wilson Center. "They're being forced to accept that it's better for them if their criminals are in the U.S."