The San Diego Gay Men's Chorus called for an investigation Sunday morning into why its members were not allowed to sing the national anthem at Saturday night's Dodgers-Padres game at Petco Park. 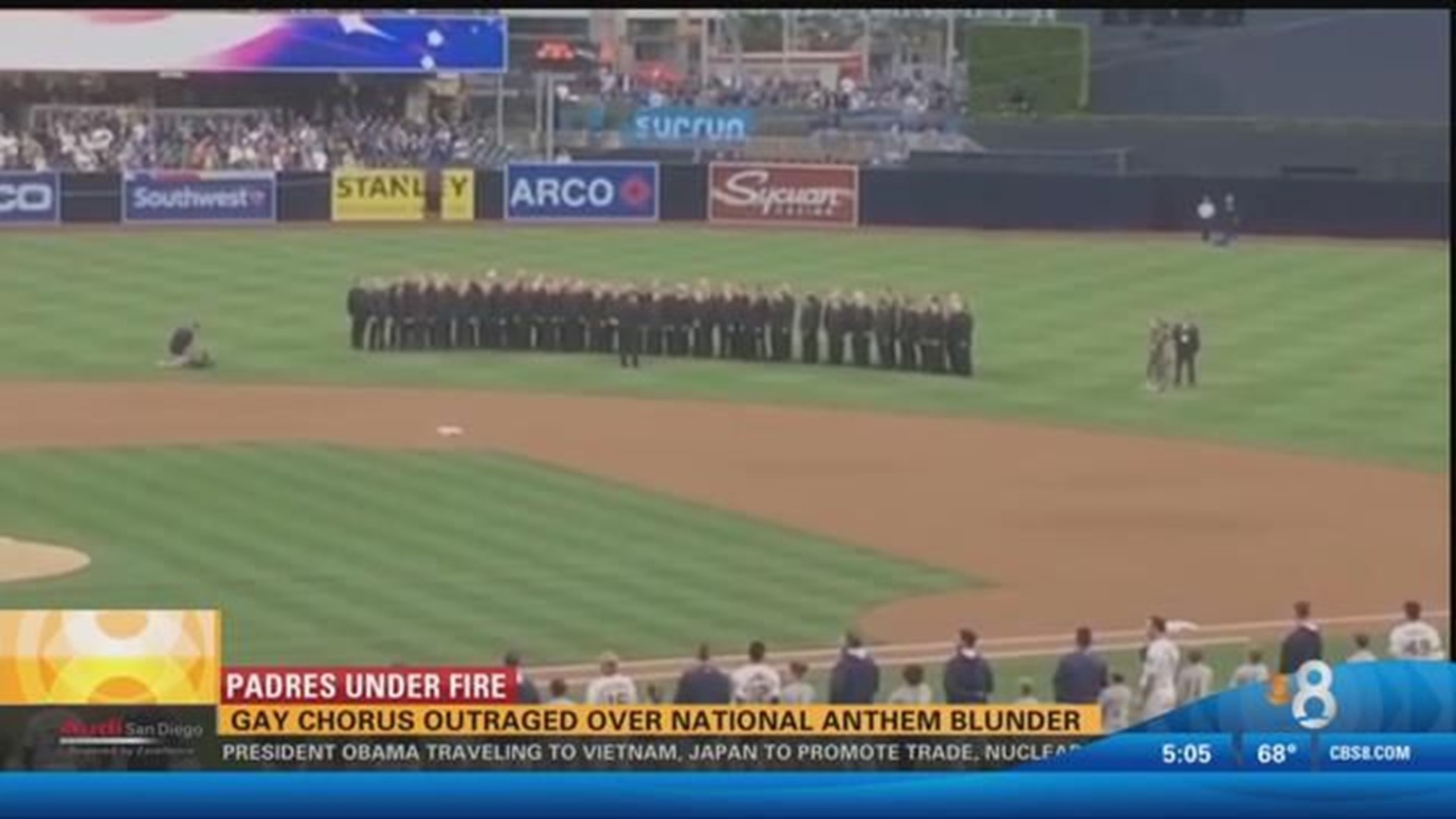 "We are pleased that MLB will look into this matter and the Padres will cooperate fully," Dee said in a posting on his Twitter account. He said the team is eager for the facts to come out regarding the incident, which has received international attention.

A team investigation found "no evidence of malicious intent," but has terminated its relationship with the third-party contractor deemed responsible for the error and disciplined an employee.

Councilman Todd Gloria, who is gay and represents the center of the LGBT community in Hillcrest, told City News Service that he has spoken with the team and chorus officials several times since the incident.

He said it appears an "honest mistake" was made but questioned why the recording wasn't stopped immediately, or the chorus wasn't allowed to return for the seventh-inning stretch.

"There were many more elegant ways to handle this, and that wasn't what happened," Gloria said.

That the story has spread internationally a little more than a month before San Diego hosts the All-Star Game is unfortunate because the Padres organization is "very inclusive" and has a long history of recognizing the local LGBT community, he said.

"It was a shame to see an event the Padres planned in order to celebrate diversity instead become overshadowed by this unfortunate mishap," Faulconer said in a statement.

"I've spoken with Padres ownership and they have expressed to me their sincere regret and explained the corrective actions they are taking," the mayor said. "I support and encourage the ongoing dialogue between the Padres, Gay Men's Chorus and LGBT community leaders."

Chorus Executive Director Bob Lehman issued a lengthy statement on the group's Facebook page Sunday and called for an investigation. He said "no attempt was made to stop the recording and start over. No announcement of apology was made to the singers or their friends and families in the stands. No attempt to correct the situation occurred other than to force the 100 men to stand in the spotlight of center field for the song's duration and then be escorted off the field to the heckles of baseball fans shouting homophobic taunts including 'you sing like a girl."'

"What should have been a night of joy and celebration at Petco Park last night instead turned into a nightmare, raising serious questions about homophobia within the San Diego Padres organization and its relationship with the LGBT community," he said.

The Padres issued an initial apology Saturday night, followed by the statement Sunday.

"We once again sincerely apologize to the members of the San Diego Gay Men's Chorus, their families and those who came out to support their Pride Night performance," the statement said. "The Padres organization is proud of our longstanding commitment to inclusion — within both our sport and our community. We deeply regret that a mistake on our part has called this into question, but accept full responsibility."

In his tweet Monday, Dee also apologized and said the chorus was invited to perform before a game later this season. He will meet with the Bob Lehman Tuesday to further address the issue.

The person who accidentally played the wrong national anthem music for the San Diego Gay Men's Chorus performance on Friday night issued a statement to CBS News 8. DJ Artform apologized for the mistake and plans on meeting with the chorus and LBGT leaders in San Diego. He was fired by the Padres. Read his statement below.

My deepest apologies and sincere regret toward the entire San Diego Gay Men's Chorus & the LGBT community for the incident that occurred during the National Anthem. It was a very unfortunate mistake but it was just that, an error. I in no way, shape or form directed any type of hate, bad intent or discrimination towards the Chorus or anyone involved. The incident was not a representation of myself, San Diego & it's amazing Baseball fans. I have felt the consequences of my mistake as my dream job has dissolved before my eyes which does not take away that I am extremely sorry for the horrible mistake that occurred. I have family members & friends that are a part of the LGBT community & I have always been a supporter of Equal Human Rights, so it pains me greatly to see that I am being accused of acting intentionally. As a former high school and college baseball player, I understand the importance of ensuring equality for all in sports and am appalled by some of the negative, homophobic comments made by fans related to the National Anthem incident. I have reached out to LGBT leaders in San Diego and am currently in discussion regarding a meeting with the Chorus and LGBT leaders personally in order to be as constructive as possible about the error. I've let down my City, my family & everyone who had faith in me. Once again,I'm truly sorry for this entire ordeal. ~ "DJ  ARTFORM"