More than 20 children injured in platform collapse in Barrio Logan

Multiple children were injured Saturday night after a stairwell collapse at Vault PK. 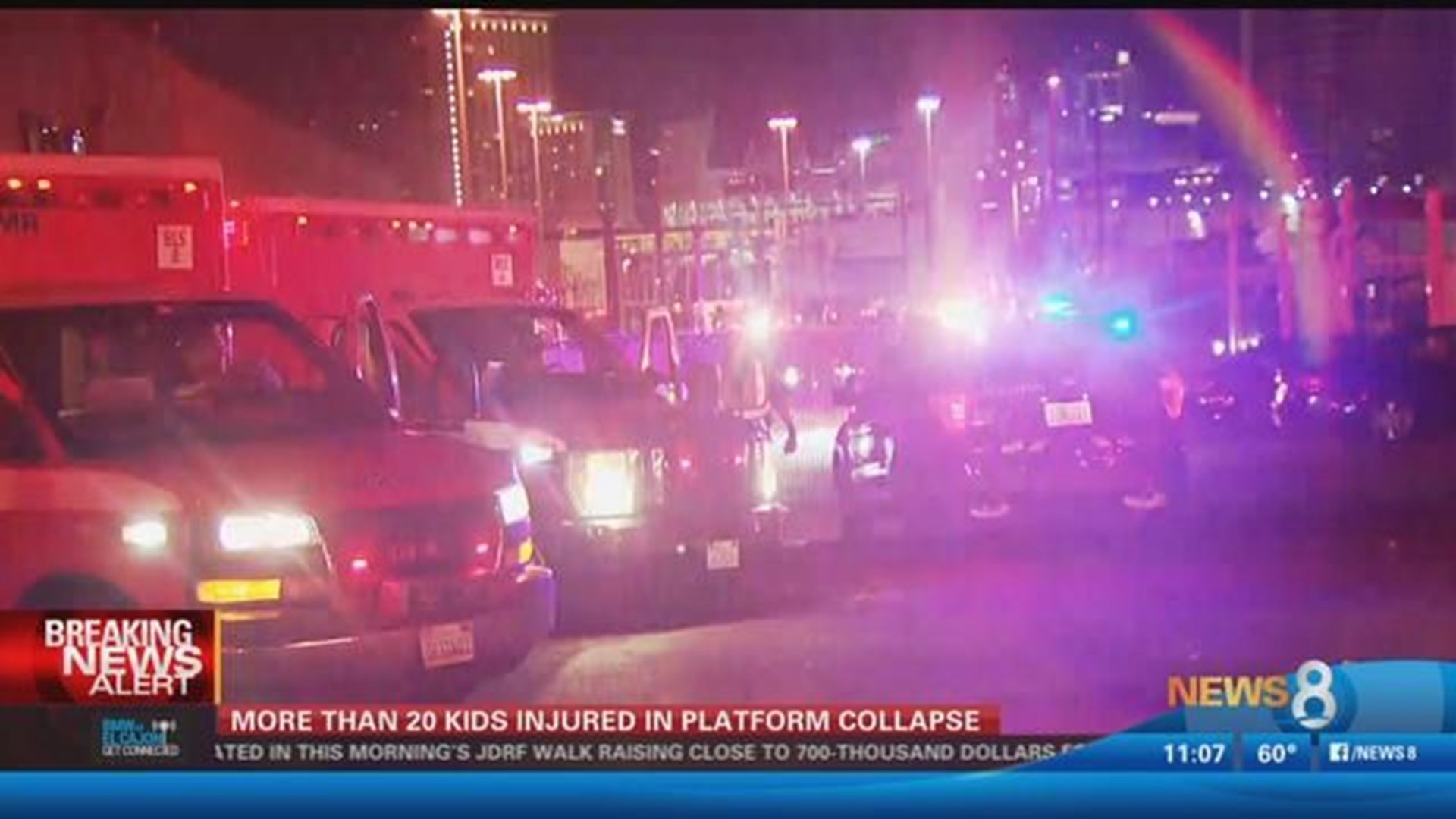 SAN DIEGO (NEWS 8/CNS) — More than 20 children were injured Saturday night when a stairway and platform collapsed at an indoor play center.

It was "children's night" at Vault PK - a parkour venue in Barrio Logan. Kids say a set of stairs and platform collapsed as they went to get pizza.

The incident was reported at 7:40 p.m. at Main and Sigsbee streets, according to the San Diego Fire Department.

Some of those injured were above the 10-foot by 30-foot platform that was 10 feet above ground and some were below it when one end of the platform gave way and people fell onto each other, SDFD spokesman Jose Ysea told City News Service.

While many suffered minor injuries, others had broken bones and injuries to the head and spine.

News 8 spoke to Stella with her mom's permission.

"I heard a crackling noise and then I ran over to the other side to try to get away from it. I ran to the other side and my hands were shaking," said Stella. "I was really scared because I didn't know if any of my friends were hurt."

"It could have been so much worse," Ysea said.

Jordan says his brother was one of those injured.

News 8 talked to Jordan with permission of the adult he was with.

"I just heard a crack and then all of a sudden it just crashed down and I heard people screaming when it was coming down," said Jordan. "After that, everyone was just crying.

"My brother, his back is hurting a little bit but I'm fine and my brother's friend is fine."

Firefighters said they join many of the parents in being grateful this wasn't much worse.

"Children are always our hardest calls that we have. In this case, there wasn't any fatalities, there wasn't any very serious injuries for the children," said one firefighter. "We were all very thankful. We just went into transporting them and have doctors further looking into their injuries."

Scripps Mercy said most of the injured they treated had also been with released with two of their patients remaining in the hospital as of Sunday.

Vault PK and the surrounding businesses were closed Sunday.

Engineers issued neither a red nor yellow tag for the building since the structure that collapsed was indoors.

Starting on Monday the focus of the investigation will turn to verifying Vault PK and the other businesses in the building were properly permitted and up to code.

The owner of Vault PK released the following statement on Sunday: