Mother of Alfred Olango: "My son (was) a good, loving young man"

Relatives and supporters of a Ugandan refugee fatally shot by a police officer during a confrontation at an El Cajon strip mall decried the killing Thursday as unwarranted and racially motivated wh... 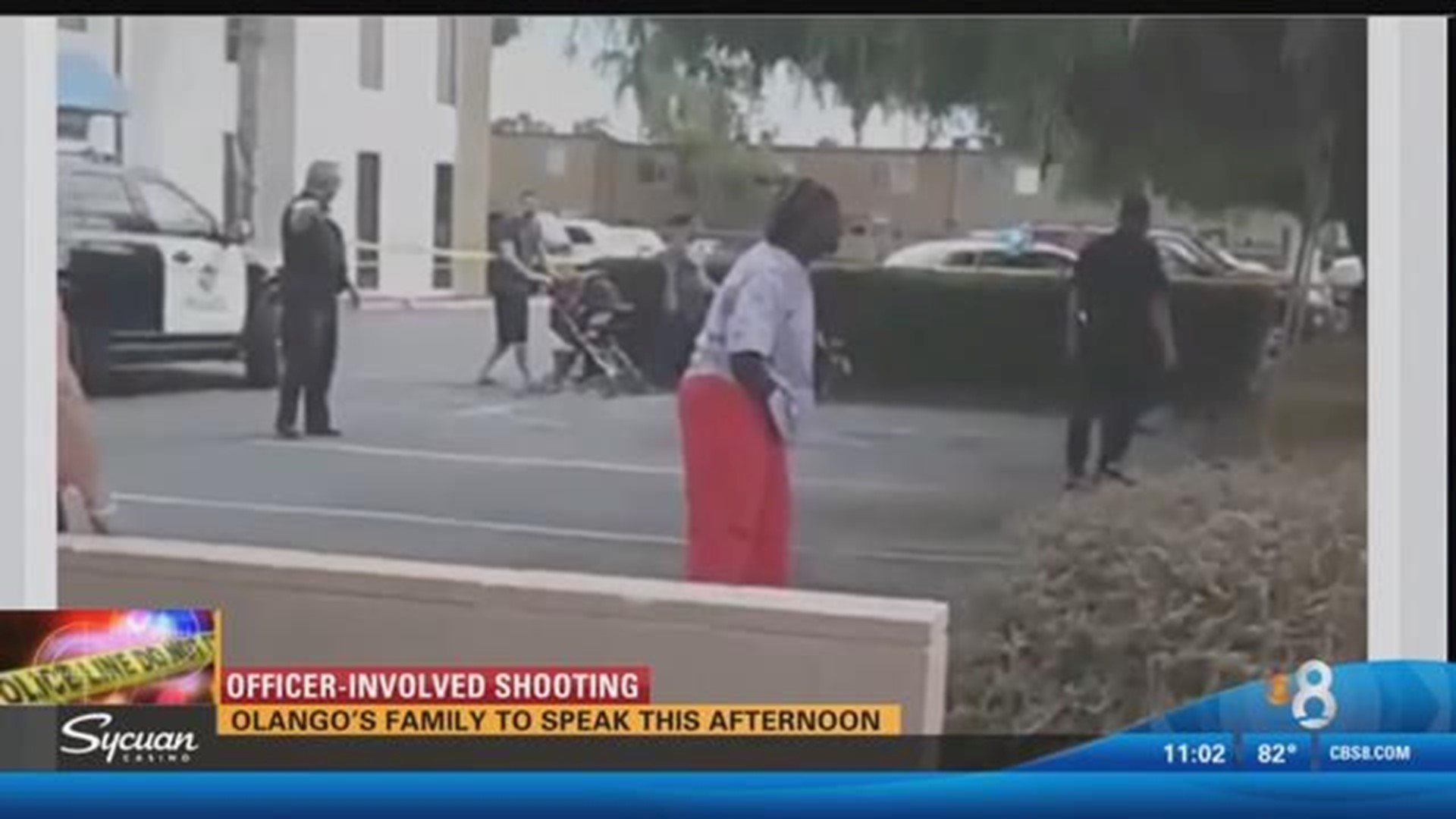 EL CAJON (CBS 8/CNS) - Relatives and supporters of a Ugandan emigre fatally shot by a police officer during a confrontation at an El Cajon strip mall decried the killing Thursday as unwarranted and racially motivated while vowing to fight for justice and calling on like-minded people to protest the death peacefully.

"We do believe that Alfred Olango was unjustly killed," the Rev. Shane Harris, president of the National Action Network-San Diego, said during a news conference at the civil rights organization's Midway-area offices.

"We do believe that the officer who shot him five times did this with misconduct, and that is why we are here today."

Olango, 38, was mortally wounded Tuesday afternoon during a confrontation with officers behind a fast food restaurant near the intersection of Interstate 8 and state Route 67.

The shooting sparked widespread protests on the streets of the East County city, with demonstrators insisting that Olango died at the hands of police because he was black.

Protesters angry over the killing took to the streets for a third night, prompting police to advise the public to avoid the area of Broadway and Mollison Avenue.

Bottles were thrown and several people were arrested, according to reports from the scene.

One witness to the shooting told reporters that Olango, an East Africa native who was unarmed at the time of his death, had his hands raised when shot, and another indicated he may have suffered a seizure.

Police officials countered that Olango was uncooperative, repeatedly refused to remove his hand from his pocket, assumed "what appeared to be a shooting stance" and pointed an object that turned out to be an electronic smoking device at one of the officers.

The events that led to the fatal confrontation began when officers were dispatched to investigate a report of a pedestrian behaving erratically and walking in traffic in a commercial district a few blocks north of El Cajon Valley High School.

Patrol personnel contacted the man, later identified as Olango, in a parking lot in the 700 block of Broadway, police Capt. Frank LaHaye said. Moments later, one of the officers shot Olango with an electric stun gun, and the other opened fire with his service gun.

During this afternoon's briefing, Olango's mother, Pamela Benge, said her son was distraught at the time of the shooting due to the death of a close friend, disputing reports that he was mentally ill.

"He was not mental -- he had a mental breakdown," she said.

Benge tearfully praised Olango as a decent person who simply needed help and kindness at the time of the deadly confrontation with police.

"My son (was) a good, loving young man, only 38 years old," she said. "I wanted his future to be longer than that. I wanted him to enjoy his daughter."

The grieving mother noted that her family had come to the United States 25 years ago to escape armed conflict in their homeland.

"We have come from a war zone," she said. "We wanted protection. That's why we're here. ... There are millions of refugees that are here, just searching for a better place. ... I thought a lovely nice country like this would protect us. We just need protection, that's all."

The shooting prompted angry protests almost immediately. Shouting, chanting crowds came together that afternoon and rallied into the night at the spot where the deadly encounter had played out.

In the early afternoon, the boisterous throng marched through town, at times blocking streets and freeway ramps while facing off with rows of officers in riot gear. The disruptions, which include some brief scuffles among the protesters, prompted a temporary closure of nearby Parkway Plaza mall.

During a news conference the day after the shooting, El Cajon Mayor Bill Wells said he was "completely fine" with peaceful dissent but was concerned about the potential for violence.

"I see what's happening all over the country," Wells said. "Of course I'm worried. ... I don't expect anything bad to happen, but I certainly don't want to be caught unaware."

Hours after the shooting, police made public a still photo lifted from witness video that showed a crouching man holding something at face level as two officers apparently trained weapons on him. Protesters decried the release of just one photo instead of the entire video.

Wells said he had seen the full footage and was deeply affected by it but was holding off on any judgments.

"I saw a man who was distraught, a man who was acting in ways that looked like he was in great pain," Wells said. "And I saw him get gunned down and killed, and it broke my heart."

The officers, each of whom has more than 20 years of law enforcement experience, were placed on administrative leave, as per protocol. Officials have promised a thorough and transparent multi-agency investigation. Protesters have demanded a federal investigation.

Critics also have questioned why personnel with special training to deal with the mentally ill were not dispatched after police received a report that Olango was behaving erratically.

A distraught woman who identified herself as Olango's sister could be heard just after he was shot asking why officers shot her brother after she called for help and told police he was troubled.

Police later said a psychiatric emergency response team clinician was on another call at the time.

San Diego attorney Dan Gilleon, who has been advising Olango's family following the shooting, told reporters the patrolman who fired the fatal shots was demoted last year for making unwanted sexual advances toward a female subordinate.

Gilleon identified the officer as 21-year department member Richard Gonsalves. The department has not released the name of either officer involved in the call that led to the shooting.

"I think anywhere in the country, that's worthy of being terminated," Gilleon said of the accusations against Gonsalves, which surfaced in a lawsuit filed by the alleged victim.

"(Department officials) didn't do that. ... And the fact the that they rallied behind him back then just begs the question ... maybe that's why they're rallying behind him right now?"

The National Action Network leader urged the public to join those who have made known their outrage about Olango's death.

"We are here to stand with the family. ... They've asked for people to speak up and use your voice," Harris said. "But please do it peacefully ... because anything else represents this family and Alfred in a bad way, and it does not represent what he represented."

According to friends, Olango was born in Kampala, Uganda, as one of nine children. His mother and siblings emigrated to New York as refugees in 1991, apparently because his father -- who worked for the late Ugandan President Idi Amin -- made threats of violence against them.

The family eventually moved to Southern California, and Olango attended San Diego High School for a time before dropping out, though he later earned a GED. According to his Facebook page, he attended San Diego Mesa College and worked at a Hooters restaurant.

In 2002, an immigration judge ordered Olango deported following his conviction for transporting and selling narcotics, according to U.S. Immigration and Customs Enforcement.

The next year, following repeated unsuccessful attempts by ICE to obtain a travel document for Olango from the Ugandan government, he was discharged from ICE custody.

His release was necessitated by a Supreme Court ruling that precludes the agency from holding foreign nationals with final orders of removal for more than six months if their deportation cannot occur within the "reasonably foreseeable future."

ICE then placed Olango under an order of supervision, directing him to report to the agency on a regular basis.

In 2009, he was returned to ICE custody after serving a prison term for a conviction on a firearms charge in Colorado. At that point, the federal agency renewed its efforts to obtain a travel document from the Ugandan government. Those efforts were futile once again, leading to another supervised release.

Olango reported in as required until February 2015, after which he failed to appear, according to ICE. The agency then lost contact with him, a spokeswoman said.