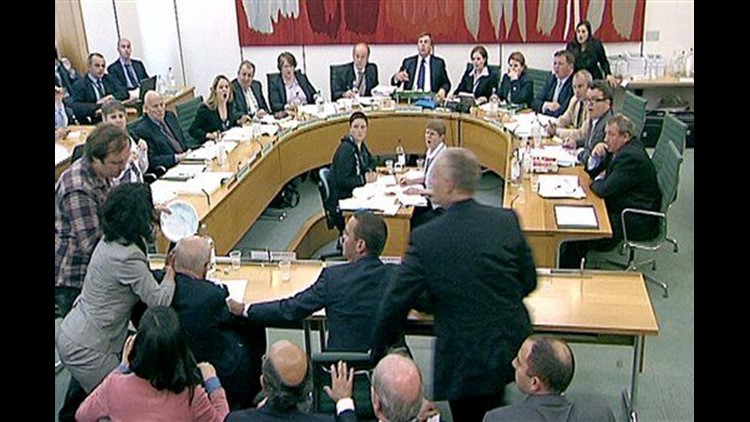 A protester splattered Rupert Murdoch with white foam on Tuesday, interrupting a dramatic hearing in which the media baron told British lawmakers he was not responsible for a phone hacking scandal tha
Author:
Published: 6:09 AM PDT July 19, 2011
Updated: 11:38 AM PDT July 19, 2011

LONDON (AP) — Summoned by lawmakers to answer for a phone hacking and bribery scandal at one of his tabloids, Rupert Murdoch said he was humbled and ashamed Tuesday but accepted no responsibility for wrongdoing as a widening investigation threatened to ensnare Britain's prime minister.

In a three-hour grilling, the 80-year-old media tycoon insisted he was at fault only for trusting the wrong people at the now-defunct News of the World, and noted that the paper made up a tiny portion of his vast media empire.

Murdoch appeared confused and flustered in the beginning of Tuesday's parliamentary hearing, turning frequently to his son James for answers. But he soon regained his trademark cool.

He said he had known nothing of allegations that staff at the News of the World tabloid hacked into cell phones and bribed police to get information on celebrities, politicians and crime victims, and that he never would have approved such "horrible invasions" of privacy.

In the face of lawmakers' suggestions that his organization encouraged such behavior, he was unflappable — even after a protester rushed at him in the middle of the hearing.

He stayed seated when the man tried to throw a foam pie at him. A News Corp. attorney partially blocked the attack and Murdoch's 42-year-old wife slapped the prankster. After the protester was arrested, the billionaire simply shed his splattered suit jacket and continued answering questions.

The scandal has captivated audiences from America to Murdoch's native Australia, and there's more to come — only a fraction of the nearly 4,000 people whose information was hacked are known and the police investigation appears to be widening. Murdoch has already shut the News of the World, given up on buying a major British satellite television company and accepted the resignations of two top executives because of the scandal.

He said he had no plans to resign but expressed contrition on behalf of News Corp.'s British newspaper division, News International.

"This is the most humble day of my career," said Murdoch, a man once so politically powerful in Britain that former Prime Minister Tony Blair flew halfway around the world to secure his support as he launched the Labour Party's bid for power in 1995.

The scandal began as a blip in 2005, when the News of the World published a story about Prince William suffering a knee injury. Royal officials became suspicious about the closely held data and alerted police. An inquiry led to one of the paper's reporters and a private investigator being jailed for intercepting communications.

The Guardian newspaper then found out that Murdoch's papers had paid out more than $1.6 million (1 million pounds) to settle lawsuits involving allegations of eavesdropping on phone messages. The scandal became a crisis for News International this month with the revelation that the News of the World had hacked into the phone of a 13-year-old murder victim, Milly Dowler, in hopes of getting material for news stories.

Occasionally punctuating remarks by slapping his hands down on the desk, Murdoch said he was "shocked, appalled and ashamed" at the hacking of Dowler's phone but he rejected that criminality had been endemic at the tabloid. He also said he had seen no evidence that victims of the Sept. 11, 2001, terror attack were hacked — an allegation the FBI is looking into.

Murdoch said he had not been informed that his company had paid out big sums — 700,000 pounds ($1.1 million) in one case — to settle lawsuits by phone hacking victims.

Murdoch noted that News of the World represented less than 1 percent of his global media empire, which also includes the Fox TV network, 20th Century Fox film studio, The Wall Street Journal, the New York Post and three major British newspapers. He said he spoke to the News of the World's editor only around once a month.

Blame, he said, rested with "the people I trusted ... and then, maybe, the people they trusted."

News International CEO Rebekah Brooks and Wall Street Journal publisher Les Hinton, former executive chairman of News International, have resigned, though Murdoch said he did not blame either of them for the scandal. Brooks and Cameron's former communications chief, Andy Coulson — a former editor at News of the World — are among several people who have been arrested in the scandal, though no one has been charged with a crime.

James Murdoch, 38, apologized for the scandal, telling British lawmakers that "these actions do not live up to the standards our company aspires to."

The younger Murdoch said the company acted as swiftly and transparently as possible. Rupert Murdoch acknowledged, however, that he did not investigate after Brooks, former editor of the News of the World, told parliament years ago that the paper had paid police officers for information.

The value of News Corp. added around $2 billion while the Murdochs were being grilled, trading 5.3 percent higher at $15.74. The stock has taken a battering over the past couple of weeks, shedding around 17 percent of its value, or around $8 billion.

Brooks testified after the Murdochs. All three agreed to provide evidence only after they were summoned.

Brooks described allegations of voicemail intercepts of crime victims as "pretty horrific and abhorrent." She said had been told by News of the World employees that allegations of phone hacking by News of the World journalists were untrue, and that she realized the gravity of the situation only when she saw documents lodged in a civil damages case by actress Sienna Miller last year.

Brooks also said she had never knowingly sanctioned a payoff to a police officer.

Asked whether she had been lied to by senior employees at the newspaper, Brooks said she could not answer because of the criminal investigation.

Politicians also pushed Tuesday for details about the Murdochs' ties to Prime Minister David Cameron and other members of the British political establishment.

Cameron, who is expected to return from Africa late Tuesday, has been criticized for employing Coulson as his communications chief when he was aware of phone hacking allegations.

Lawmakers want to know why Cameron insisted on hiring Coulson despite warnings, how much the prime minister knew about the phone hacking investigation, whether Coulson had any role in persuading the police to initially drop the hacking investigation, and how many times Cameron met with Murdoch or top associates at News International.

Before the Murdochs' testimony, lawmakers questioned London police about reports that officers took bribes from journalists to provide inside information for scoops, and to ask why the force decided to shut down an earlier phone hacking probe after charging only two people.

Detectives reopened the case earlier this year and are looking at a potential 3,700 victims. Police have only notified some 200 of the people.

The erupting scandal has revealed a cozy relationship between British police and the press. Paul Stephenson, who resigned as London's police commissioner Sunday, told lawmakers Tuesday that 10 of the Metropolitan Police's 45 press officers used to work for News International.

Stephenson denied wrongdoing, or knowing the News of the World was engaged in phone hacking, but acknowledged that he was embarrassed that the force had hired Neil Wallis, an arrested former executive of the paper, as a PR consultant. Stephenson said he stepped down because allegations about his contacts with News International were a distraction to the force.

He was followed out the door by assistant commissioner John Yates, who also testified Tuesday. Yates has denied wrongdoing and said that, with the benefit of hindsight, he would have reopened an inquiry into electronic eavesdropping of voicemail messages.

Rupert Murdoch is eager to stop the crisis from spreading to the United States.

In New York, News Corp. appointed commercial lawyer Anthony Grabiner to run its Management and Standards Committee, which will deal with the scandal.

News Corp. board member Thomas Perkins told The Associated Press that Murdoch has the full support of the company's board of directors, and it was not considering elevating Chief Operating Officer Chase Carey to replace Murdoch as CEO of News Corp.