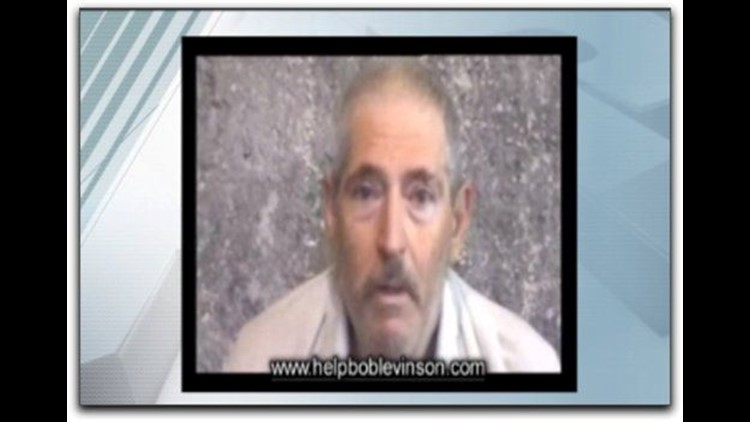 WASHINGTON (AP) — Christine Levinson had endured nearly four years of despair since her husband, Robert, disappeared in Iran. Every glimmer of hope in the U.S. government's search for him had faded away, every optimistic lead had ended with disappointment. Privately, some believed he was probably dead.

Then, in November 2010, the mother of seven, who had never given up hope, received in an email from an unknown address. A file was attached.

But it would not open.

Frantically, she forwarded it to some computer savvy friends, people close to the family recalled. Can you open this, she asked? What is it?

Finally, the file opened. Her friends held the phone to the computer. And though she could not see his face, she immediately recognized the voice.

It was a video, the proof of life that the family had sought for so long.

The video, which the Coral Springs, Fla., family released Friday, represented the most significant clue in a mystery that has confounded investigators from the start. But it did not end the family's vigil, or answer the most important questions: Who was holding Levinson? And why?

On the tape, Robert Levinson, the once burly, gregarious retired FBI agent, looked haggard. His voice wavered. But he was alive.

"I have been treated well. But I need the help of the United States government to answer the requests of the group that has held me for three and a half years," Levinson said. "And please help me get home."

He was a hostage.

It was the first breakthrough in the case since Levinson, a private detective, traveled to the Iranian island of Kish in March 2007. His family said he was there investigating cigarette smuggling for a corporate client. He spent one night in a hotel, meeting a fugitive named Dawud Salahuddin, a man wanted for the murder of an Iranian diplomat in the United States in 1980.

Levinson checked out of his hotel and vanished.

Everything after that has been a mystery. The video, however, contained some tantalizing clues, and the government's experts have studied each one.

The faint music in the background, it was determined, was Pashto wedding music from a region in Pakistan and Afghanistan, just over Iran's eastern border.

The email address traced back to an Internet cafe in Pakistan, according to several officials who, like others interviewed for this story, spoke only on condition of anonymity to discuss the case.

And then there were Levinson's words. He said a "group" held him, not a government. And he said he had been held "here" for that time, suggesting he had not been moved. But his words appeared scripted. It could all be misdirection.

The video ignited the most hopeful round of diplomacy in his case to date. Publicly, Secretary of State Hillary Clinton announced in March that Levinson was alive and called on Iran to help find him. More privately, U.S. officials met with members of the Iranian government to discuss the case.

Momentum seemed to be building toward Levinson's release.

But some things didn't add up. Most significantly, the note accompanying the video demanded the release of prisoners. But officials said the United States wasn't holding those prisoners. They concluded that some of them might not even be real people.

U.S. officials and Levinson's family and friends were convinced that someone was trying to tell them something, but they didn't know who or what. Whoever had Levinson, they figured, wanted to instill a sense of urgency.

"I am not in very good health," Levinson, who is now 63, said in the video. "I am running very quickly out of diabetes medicine."

Then, early this year, the family received another email, this one containing photos showing Levinson in an orange prison jumpsuit like those worn by detainees at the Guantanamo Bay prison. He had a long beard and disheveled hair. He was even thinner.

In each photo, he wore a different sign hung around his neck. One read, "Why you can not help me."

This time, officials traced the email back to Afghanistan. They still had no idea where Levinson was.

None of these groups has a clear motive for picking up Levinson. But an American hostage, particularly a former FBI agent, would be considered a valuable commodity to any of them.

Or maybe, some U.S. officials said, the Iranian government routed the video through Pakistan as a way to blame Levinson's disappearance on someone else, like the anti-Iran terrorist group Jundallah.

But it was all just theory.

Both the government and the family kept the existence of the video and pictures quiet. The Associated Press learned about them shortly after they arrived but delayed reporting about them because the government said doing so would jeopardize what was shaping up as the best chance to bring Levinson home.

But weeks became months, and officials soon became less optimistic about the talks between the U.S. and Iran.

On Friday, Christine Levinson and her son, David, broke out of the diplomatic process that had been unsuccessful for so long. On their family website, they posted a video message to the kidnappers.

"Please tell us your demands so we can work together to bring my father home safely," David Levinson said.

They released the hostage video to the world and asked whoever sent it to contact them again.

"We are not part of any government and we are not experts on the region," David Levinson said. "No one can help us but you. Please help us."

It was a desperate plea, one made as relations between the Iranian and U.S. governments have grown steadily worse. The Justice Department recently accused Iranian intelligence agents of plotting to assassinate Saudi Arabia's ambassador in Washington. Then a United Nations watchdog released a report warning of Iran's nuclear ambitions, prompting the United States and its Western allies to issue new sanctions against Iran's financial system.

Most recently, a high-tech, stealth CIA drone was captured by Iranian officials while on a surveillance mission over Iran. The embarrassing mishap put sophisticated technology in Iranian hands and provided public evidence of the kind of spying that's been long suspected.

The one bright spot in Washington's relationship with Tehran was the release of two American hikers from an Iranian prison in September. The U.S. worked behind the scenes to secure that release, but, much to the frustration of his family, officials said Levinson was not part of those discussions.

"It was their decision to release it in an effort, they hope, to help bring more leads to the investigation," she said. "So, obviously we're all hopeful that this will bring more leads."

Now, Levinson's family must wait again and hope that someone responds to their pleas.

"All I want is for our family to be whole again," Christine Levinson said in the video, in a message directed toward her husband. "We love you. We miss you every day. We will not abandon you."