None of the Marines were involved in border security operations. 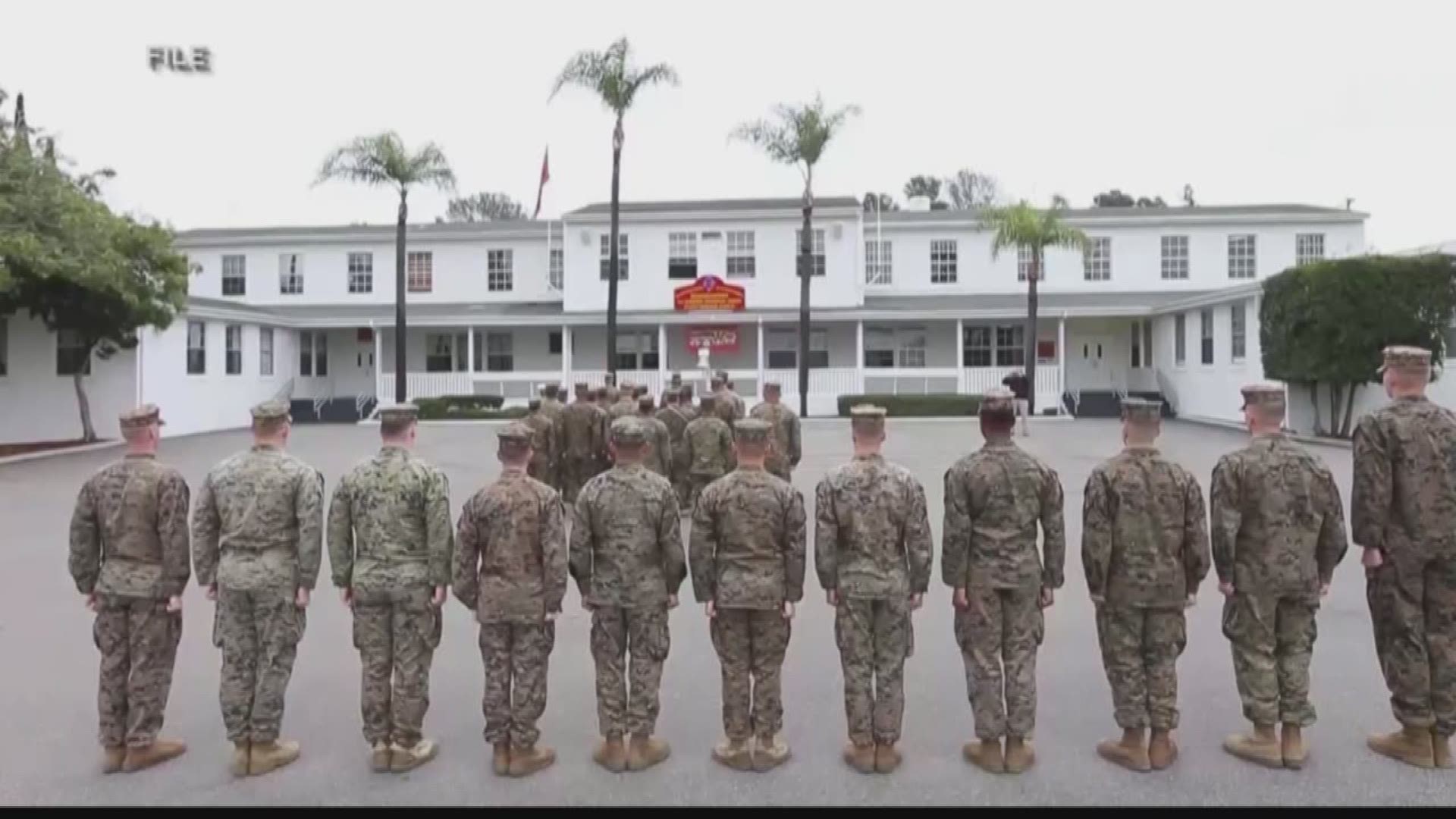 SAN DIEGO (AP) — An investigation into Marines accused of helping smuggle migrants into the United States led to the arrest Thursday of 16 of their fellow Marines at California's Camp Pendleton, just north of the U.S.-Mexico border.

In a dramatic move aimed at sending a message, authorities made the arrests as the Marines gathered in formation with their battalion.

None of the 16 Marines were involved in helping enforce border security, the Marine Corps said in a news release. They are accused of crimes ranging from migrant smuggling to drug-related offenses.

Officials could not immediately be reached for additional details.

The arrests came weeks after two Marines were arrested by a Border Patrol agent on suspicion of transporting three Mexicans on the promise of money after they crossed illegally into the United States.

The military said the investigation helped authorities identify the 16 Marines arrested at the largest Marine Corps' base on the West Coast, about 55 miles (90 kilometers) from San Diego's border with Mexico.

Retired Marine Lt. Col. Gary Barthel called it a "kind of black eye for the Marine Corps" and said it was important the military show criminal behavior will not be tolerated.

"Obviously I think it looks bad whenever you have the military that is helping protect the border and then you've got military people smuggling," said Barthel, an attorney at the Military Law Center in Carlsbad, north of San Diego.

Marines and other U.S. troops were brought in last year to help reinforce the border by installing razor wire on top of existing barriers, among other things. Troops are barred from arresting migrants.

All 16 were junior enlisted Marines. Barthel said smugglers may have targeted young troops who could be vulnerable to being enticed by fast money.

Border Patrol agents over the years have routinely caught migrants in the country illegally walking onto Camp Pendleton or floating in skiffs off the coast nearby. Authorities said the base, cut by Interstate 5 leading to Los Angeles, sits along a well-traversed route used by migrant smugglers.

Officials from 1st Marine Division worked alongside the Naval Criminal Investigative Service in the investigation that started after the July 3 arrests of two Marines, who were charged in federal court with migrant smuggling. Both pleaded not guilty to the charges.

A U.S. Border Patrol agent stopped Lance Cpl. Byron Darnell Law II and Lance Cpl. David Javier Salazar-Quintero about 7 miles (11 kilometers) north of the border after being alerted by other agents that a vehicle similar to theirs was suspected of picking up migrants who came into the country illegally, according to the federal complaint.

Three migrants were found in the backseat of a black BMW driven by Law, investigators say. Both Marines are riflemen assigned to 1st Battalion, 5th Marine Regiment, 1st Marine Division at Camp Pendleton.

Law told the agent that Salazar asked if he was interested in earning $1,000 picking up an "illegal alien."

Salazar told authorities that Law introduced him to a man who "recruited" him to help smuggle in migrants, according to court documents. Salazar said he had gone out to pick up migrants on four separate occasions but was never paid.

Law and Salazar, who speaks Spanish, went to the border the night of July 2 and received instructions from a Mexican cellphone, court documents say. Law told the agent they picked up a man and dropped him off at a McDonald's in Del Mar, a beach community north of San Diego, and then returned to the base. They were not paid.

Law said Salazar told him they would be paid if they picked up three migrants on July 3 near the border, according to court documents.

The three migrants told authorities they were from Mexico and agreed to pay $8,000 to be smuggled into the United States.

Marine Corps officials gave no details about how or why the investigation expanded to result in the arrest of 16 others. The Naval Criminal Investigative Service also declined to comment.

An additional eight Marines were being questioned about their involvement in drug offenses as part of a separate investigation.