Biden vows action on migrants as he defends border policy

The number of migrants attempting to cross the border is at the highest level since a spring 2019 surge under Trump, according to recent statistics. 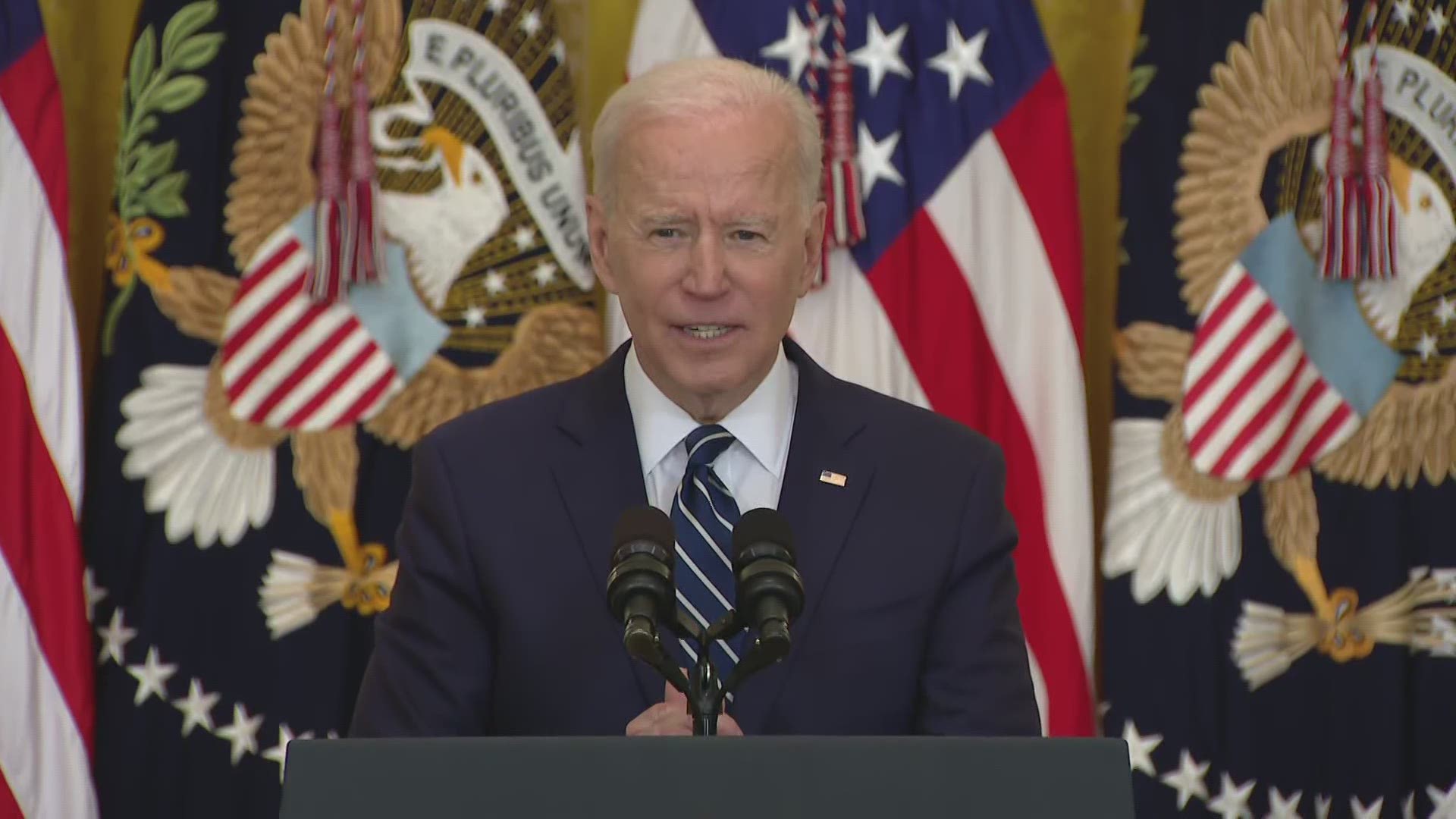 WASHINGTON — The U.S. will take steps to more quickly move hundreds of migrant children and teens out of cramped detention facilities along the Southwest border, President Joe Biden said. He was pushing back against suggestions that his administration's policies are responsible for the rising number of people seeking to enter the country.

Pressed repeatedly on the border issue at his first news conference since taking office, Biden said Thursday his administration was taking steps to address the situation with measures such as setting aside space at a Texas Army base for about 5,000 unaccompanied minors. But he mostly fired back at criticism.

He noted that his administration, as was done under President Donald Trump, is continuing to quickly expel most adults and families under a public health order imposed at the start of the COVID-19 outbreak. The crucial difference is that the government is allowing teens and children, at least temporarily, to stay in the country, straining government resources during the pandemic.

“The only people we’re not going to let be left sitting there on the other side of the Rio Grande by themselves with no help are children,” he said.

RELATED: Biden says he plans to run for reelection in 2024

The situation along the U.S.-Mexico border has become an early challenge for the administration, drawing more questions than any other subject at the maiden news conference, and diverting attention as the administration addresses the pandemic and the economy.

The number of migrants attempting to cross the border is at the highest level since a spring 2019 surge under Trump, according to the most recently released statistics. The numbers appear to be rising and Department of Homeland Security Secretary Alejandro Mayorkas recently warned they are on pace to hit a 20-year peak.

Biden sought to portray it as a seasonal spike and not, as critics have said, a result of moves such as his decisions to halt construction of border wall projects started under Trump or support for broad immigration legislation.

“It happens every year,” he said. “Does anybody suggest that there was a 31% increase under Trump because he was a nice guy and he was doing good things at the border? That’s not the reason they’re coming.”

Credit: AP
The border fence that separates the United States and Mexico is seen from Kory's, a clothing store in downtown Nogales, Arizona on March 15, 2021. Small businesses in border towns across the U.S. are reeling from the economic fallout of the partial closure of North America's international boundaries. Residents, small business owners and local chambers of commerce say the financial toll has been steep, as have the disruptions to life in communities where it's common to shop, work and sleep in two different countries. (AP Photo/Suman Naishadham)

Trump responded to a sharp increase in border crossings in 2019 by requiring migrants to wait in Mexico while the U.S. evaluated their asylum petitions or to make claims instead in Guatemala, El Salvador or Honduras. Those Trump-era programs were criticized for sending people fleeing violence back into dangerous situations.

Former acting DHS secretary Chad Wolf, now a fellow at the Heritage Foundation, said Thursday that Biden invited the current crisis by ending those programs and other measures. “He took away all of the consequences, at the same time he began to message that it was perfectly acceptable to come," he said.

Biden, for his part, condemned the Trump-era requirement that migrants await their asylum claims in Mexico as "sitting on the edge of the Rio Grande in a muddy circumstance with not enough to eat.” He also criticized an earlier policy of separating children from their families at the border and argued that it's conditions in people's home countries that push them to the U.S. border.

Biden said that his administration is working to help the countries where migrants are coming from with long-term solutions to their issues, citing $700 million in aid going to Central America.

The number of migrants encountered by authorities along the Southwest border has been rising since April, shortly after the Trump administration imposed a public health order authorizing Customs and Border Protection to quickly expel most people. Many of those are repeat crossers, trying again after they have been sent back.

But in recent weeks, the number of unaccompanied minors has dramatically increased, straining the ability of CBP to hold them in their detention facilities until they can be turned over to the Department of Health and Human Services. The department houses them until they can be placed with relatives or sponsors while the government decides whether they have a legal claim for residency, either under asylum or for some other reason.

The government said there were nearly 5,000 children in Border Patrol custody as of Tuesday and an additional 11,551 at Department of Health and Human Services shelters.

Biden said the administration was opening up bed space at Fort Bliss, Texas, and was taking steps to more quickly to establish the identity of relatives in the U.S. so the minors can be moved out of government custody.

More than 100,000 migrants were stopped crossing the border in February, the most recent statistics publicly available. Most were single adults and were quickly turned back. Most families are being turned away as well, though Mexico has been refusing to accept some in shelters during the pandemic. Biden says it is working with the Mexican government to take more of them and to shore up its own border.

Wolf, however, is skeptical that any efforts by the Mexican government will make much of a difference. “The dynamics aren’t going to change unless the policies change,” he said.