The rift between House Speaker Nancy Pelosi and a group of freshmen congresswomen led by Rep. Alexandra Ocasio-Cortez has spilled into the party's presidential race. 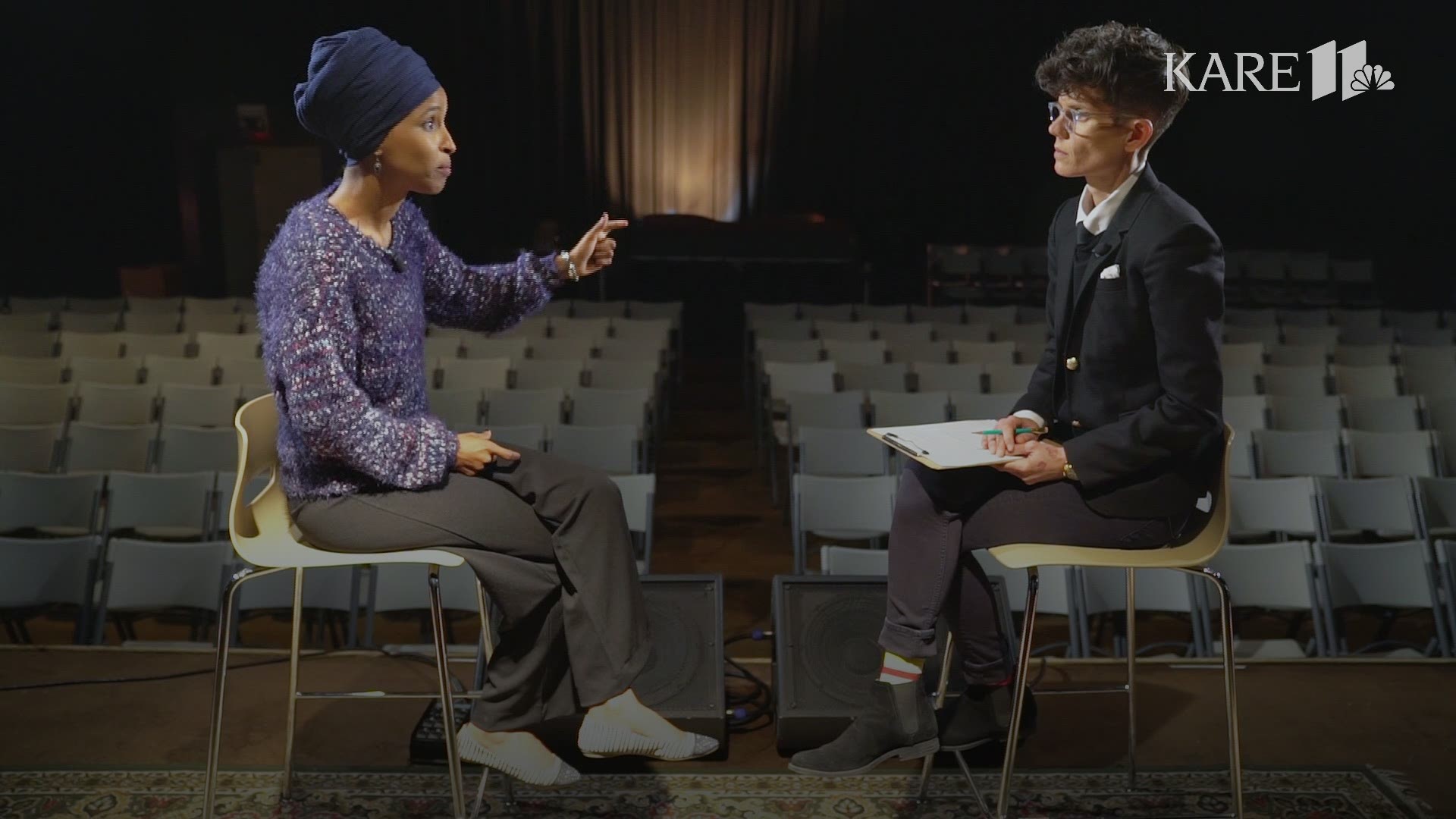 LOS ANGELES — The highly public rift between House Speaker Nancy Pelosi and a clutch of freshmen congresswomen led by Rep. Alexandra Ocasio-Cortez has spilled into the 2020 Democratic presidential contest. The intramural conflict is threatening to overshadow President Donald Trump's history of race-baiting.

Seizing an opportunity to rile his opponents, Trump on Friday offered a finger-wagging rebuke to Ocasio-Cortez and a defense of Pelosi. "She is not a racist," he said of the speaker, who rarely hides her contempt for the president and certainly was not seeking his support.

Trump has portrayed Muslims and Mexican immigrants as dangerous and failed to fully condemn white supremacists. But while many Democrats had hoped to use the president's history on race against him, the party's 2020 hopefuls are finding they first need to reconcile the matter internally.

Former Vice President Joe Biden cited Trump's tacit support for white supremacists as the primary motivation for his White House bid. Yet Biden has struggled in recent weeks to explain his own record on race, including his work with segregationist lawmakers in the early 1970s, support for a crime bill that disproportionately hurt minorities and racially insensitive comments about school desegregation decades ago.

In the first Democratic presidential debate last month, California Sen. Kamala Harris skewered Biden's record on race, and his support in public polls has declined since.

RELATED: Biden says he was wrong in comments about segregationists

Now that debate is also playing out on Capitol Hill in the feud between two prominent congresswomen: Pelosi, the most powerful Democrat in Washington, and Ocasio-Cortez, a 29-year-old self-described democratic socialist who is one of four members of a high-profile "squad" of newly elected women of color.

Pelosi sought to minimize Ocasio-Cortez's influence in recent days, while Ocasio-Cortez called the speaker "disrespectful" and accused her of marginalizing women of color.

The friction has forced the party's presidential candidates to weigh in. And so far, no one wants to pick sides.

Harris described Ocasio-Cortez as "bold and smart as anything" but declined to criticize Pelosi in a Friday interview with The Breakfast Club, a New York-based radio show.

"She's not going to go with status quo because that's the way it's always been done, she questions it. I think that's healthy," Harris said of Ocasio-Cortez. "I think that when you have anyone who is as smart and as bold as her questioning the system and doing it in such an effective way, it can throw people off their game."

Harris also disputed Ocasio-Cortez' criticism of Pelosi: "I've known her to be very respectful of women of color and very supportive of them. So I have a different experience."

Credit: AP
Speaker of the House Nancy Pelosi, D-Calif., meets with reporters at the Capitol in Washington, Thursday, May 23, 2019.

South Bend, Indiana, Mayor Pete Buttigieg, who has struggled to attract minority support early in his underdog presidential bid, was even more cautious when asked to address the rift as he campaigned Friday in New Hampshire.

"I'm not going to pick sides in a House caucus tussle," he said. "What I will say is that the diversity of opinions in the party right now is pretty healthy. And one of the best ways that we hash out what we believe as a party is through something like a Democratic primary nominating process for the presidency."

The fight within the party could limit the efforts to highlight Trump's hardline rhetoric and policies on race and immigration.

Congressional Democrats released a report this month on the 2,648 children the Trump administration separated from their families last year along the U.S.-Mexico border. At least 18 children under age 2 — half of whom were just months old — were kept from their parents up to half a year.

Trump famously called Mexican immigrants rapists and murders in his campaign announcement speech. He has since promoted social media posts from white nationalists. And he said there were "very fine people" on both sides of a white supremacy rally in Virginia in August 2017 that left one protester dead.

But Democrats are talking more about themselves than about Trump. And the conversation is not an easy one. They want the grassroots energy that Ocasio-Cortez can provide along with the institutional heft that Pelosi routinely delivers.

Among the 2020 candidates, Vermont Sen. Bernie Sanders and Massachusetts Sen. Elizabeth Warren have been the most prominent Ocasio-Cortez allies in recent months. Sanders and the young congresswoman headlined a rally for the Green New Deal together in May, while Warren wrote that "millions are taking cues from her" in an essay outlining Ocasio-Cortez' place on Time Magazine's list of the 100 Most Influential People of 2019.

Neither has spoken out on the Pelosi-Ocasio-Cortez dispute in recent days, however.

Liberal activist Adam Green, a Warren ally, said that with the exception of the Democratic Party's eventual presidential nominee, no Democrat will command more attention in national politics in 2020 than Ocasio-Cortez.

"She and her allies in the squad are redefining the debate," he said.

He may be overstating her reach. Democrats also know that they regained the majority in the House by winning far more suburban districts with more centrist candidates in the very places they need to retake the White House.

Pressley said, "I do think that there are many people who are unheard and it's our job to create space for those voices to be heard, that's what guides me in this work every day, not palace intrigue."

As she kicked off a bus tour in Pittsburgh earlier in the week, Gillibrand showed a dexterity designed not to offend.

"I think the Democratic Party is a large, diverse party ... and we're up against a president who's trying to take away health care rights, who won't stand up to the drug companies, who won't stand up to the special interests," Gillibrand said Thursday of the Pelosi-Ocasio-Cortez feud. "And so I think we'll figure it out, and I have great faith in our new members of Congress as well as the speaker to find the common ground to move us forward."