Despite rhetoric, GOP has supported court packing in states like Arizona, Georgia

President Trump has seized on the issue in the final weeks of the race, arguing Joe Biden would push Congress to increase the number of Supreme Court seats. 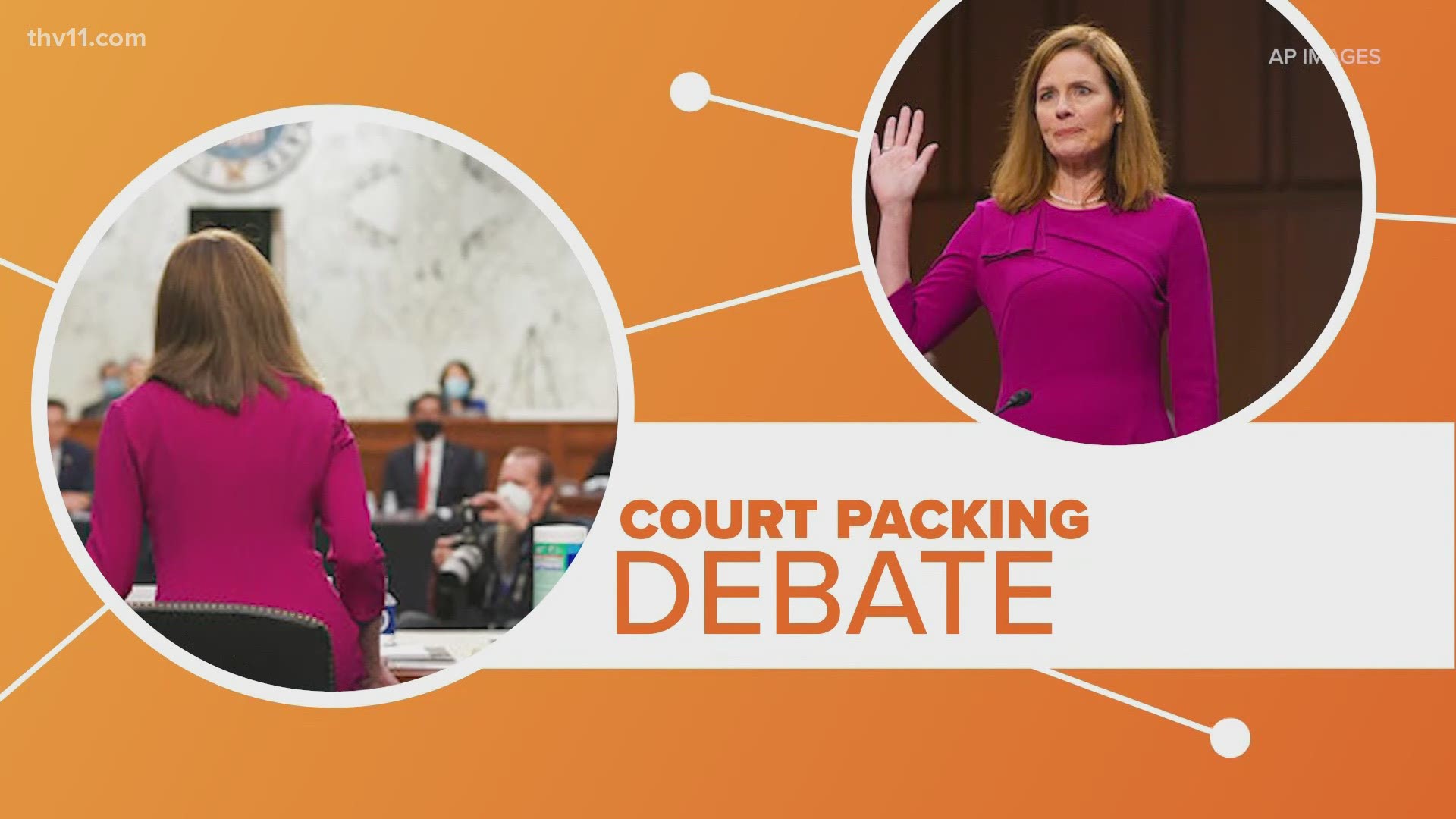 Republican claims that Democrats would expand the U.S. Supreme Court to undercut the conservative majority if they win the presidency and control of Congress has a familiar ring.

It's a tactic the GOP already has employed in recent years with state supreme courts when they have controlled all levers of state political power.

Republican governors in Arizona and Georgia have signed bills passed by GOP-dominated legislatures to expand the number of seats on their states’ respective high courts. In Iowa, the Republican governor gained greater leverage over the commission that names judicial nominees.

“The arguments being advanced now by Republican leaders — that this is an affront to separation of powers, that this is a way of delegitimizing courts — those don’t seem to be holding at the state level,” said Marin Levy, a law professor at Duke University who has written about efforts to expand state high courts.

President Donald Trump and the GOP have seized on the issue in the final weeks of the presidential race, arguing that Democratic nominee Joe Biden would push a Democratic Congress to increase the number of seats on the Supreme Court and fill those with liberal justices.

Some on the left have floated the idea in the wake of Republicans' rush to confirm Amy Coney Barrett to fill the seat of Justice Ruth Bader Ginsburg, a liberal icon who died last month.

Biden, for his part, has said he's not a fan of so-called “court packing,” and it's far from certain that Democrats can win back the majority in the U.S. Senate.

"We shouldn’t be changing our institutions,” he told reporters recently.

Yet Ducey signed a bill that did just that at the state level in 2016, expanding the Arizona Supreme Court from five seats to seven. As a result, Ducey has appointed more judges than any other governor in the state's history.

Ducey said the situations are not the same because Arizona’s system for selecting judges allows him to appoint them only from a list sent to him by a commission that interviews and vets candidates.

Arizona judges also face “retention” elections, a process that is essentially a formality. No state supreme court justice has ever lost a retention election.

“It’s apples and oranges,” Ducey said, comparing the state and federal high courts. “We have a merit selection process in Arizona, and I’m not the one who selects the judges that are put in front of me.”

Credit: AP
FILE - In this Tuesday, Aug. 11, 2020, file photo, Republican Arizona Gov. Doug Ducey speaks prior to Vice President Mike Pence speaking at the "Latter-Day Saints for Trump" Coalition launch event in Mesa, Ariz. Republicans have criticized a push by some Democrats to expand the number of seats on the U.S. Supreme Court, but their tune has changed when it comes to the highest courts at the state level. In 2016, Ducey signed into law measures expanding the number of seats on the Arizona state Supreme Court. (AP Photo/Ross D. Franklin, File)

That same year in Georgia, then-Gov. Nathan Deal signed similar legislation expanding that state's supreme court from seven to nine seats. Supporters said the move was needed because of the state's growing population and economy.

But the expansion allowed Deal to leave his conservative mark on the court by appointing a majority of its justices by the time he left office.

Democrats, including then-House Minority Leader Stacey Abrams, opposed the expansion. She questioned the need for adding seats without seeing the effects of other changes the Legislature made to the court’s responsibilities.

“To simultaneously increase the size of the court without really understanding the necessity, I find problematic,” Abrams, who two years later narrowly lost a bid for governor, said at the time. “There are political concerns, always, about appointments to the court and the positions that those new justices would take."

Some of the court-packing efforts at the state level have come in response to controversial court rulings. In 2007, a Republican state senator in the majority-Republican Florida Legislature proposed and later withdrew a proposal to more than double the number of seats on the state Supreme Court after the court struck down a school voucher bill. The legislation said the court's decision “betrays a lack of respect on the part of the majority for the separation of state powers."

A Republican lawmaker in Iowa's Legislature, then controlled by Democrats, proposed expanding the state's high court in 2009 following a ruling legalizing gay marriage in the state.

That effort was unsuccessful, but conservatives in the now majority GOP Iowa Legislature last year upended the way justices are chosen for the court. Republican Gov. Kim Reynolds signed into law legislation that effectively gave her a majority on the commission that names potential judges and justices.

The change had the backing of the Judicial Crisis Network, a conservative group in Washington that has spent millions on ads urging Barrett's confirmation.

“The people of Iowa want fair justice, so why do trial lawyers carry more weight than you?” the group said in a video backing the changes in Iowa.

The state-level moves are part of a broader, longer-term effort by conservatives to reshape the judiciary. Outside groups have been playing an increasing role in state judicial races in recent years. They accounted for a quarter of all spending in the 2018 state supreme court elections, and in some states outspent the candidates, according to figures compiled by the Brennan Center for Justice.

“There are just so many stories to point to from so many different states of legislators using every tool they have to give themselves and their allies an upper hand in the state’s most important courts," said Douglas Keith, counsel at the Brennan Center.