The campaign is meant to discourage people from gathering for New Year's Eve as cases surge in California. 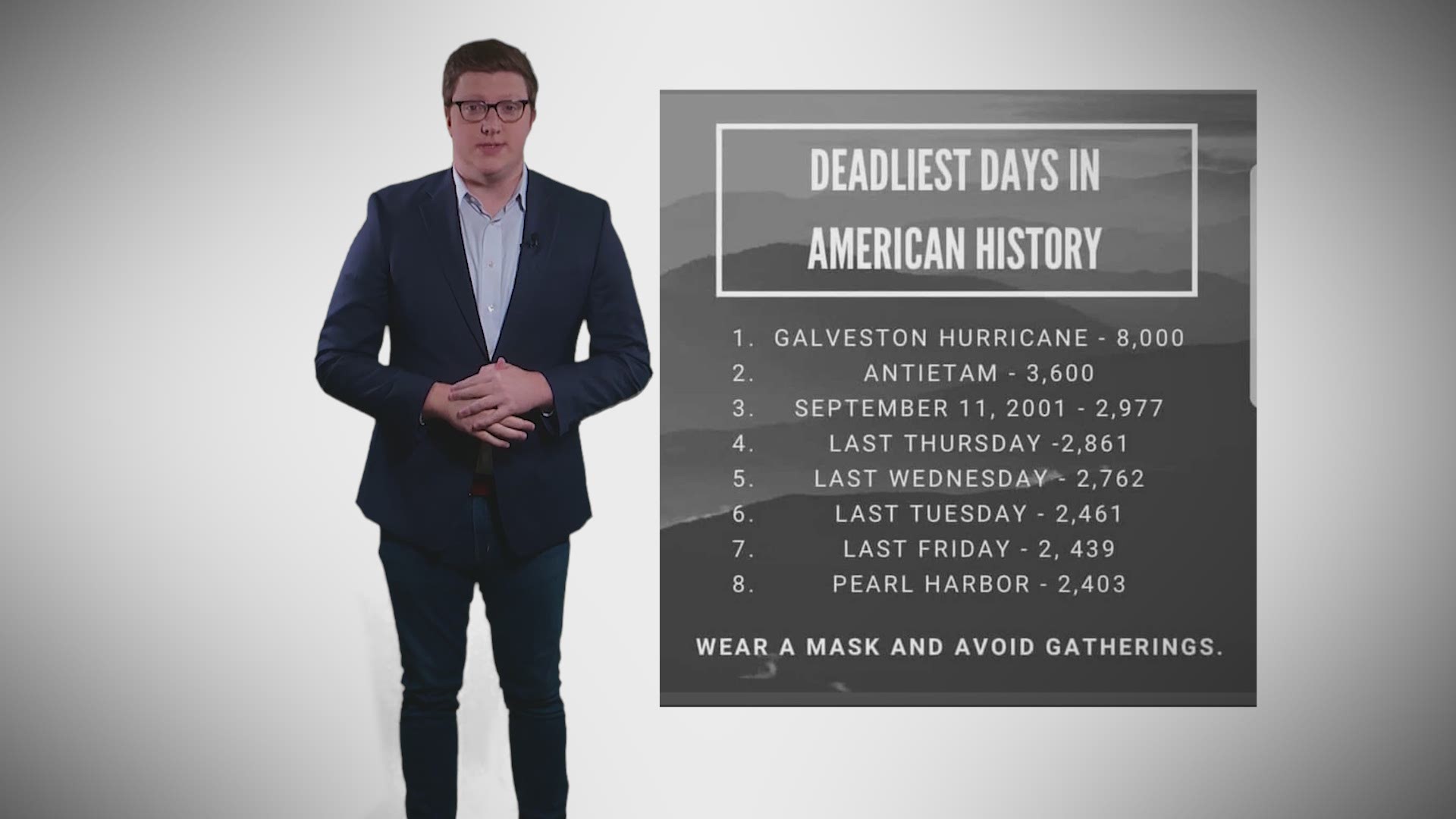 Someone's mother. A cancer survivor. A veteran. All lost to COVID-19.

The County of Los Angeles Public Health Department posted these descriptions as it launched a grim Twitter campaign Thursday in an effort to discourage revelers from gathering and leaving home for New Year's Eve.

"#Every10Minutes someone dies of COVID-19 in LA County. People who were loved and will be missed. Until we slow the spread, the next person to tragically pass away could be someone you know," the account posted at the beginning of its campaign at 3 a.m. on Dec. 31.

Since then, the department has continued to post every ten minutes.

Some of the descriptions include the following:

"The kindergarten teacher at the local school."

California on Thursday surpassed 25,000 coronavirus deaths since the start of the pandemic, the third state to do so after New York and Texas, health officials said.

The grim milestone comes as the nation's most populated state faces a surge of COVID-19 infections that has hospitals stretched to capacity and forced nurses and doctors to treat more patients than usual. California also has confirmed the second reported U.S. case of a mutant variant of the coronavirus that appears to be more contagious.

The state Department of Public Health says hospitals in Southern California and the agricultural San Joaquin Valley, which together account for a large majority of the state’s 40 million residents, have no capacity left in intensive care units to treat COVID-19 patients.

Hospitals are housing patients in hallways, conference rooms, a cafeteria and gift shops. Makeshift hospitals are being set up in tents, arenas and schools.

California was the third state to reach 25,000 deaths, behind New York, which has nearly 38,000 deaths, and Texas, which has more than 27,000, according to a tally by Johns Hopkins University.

California’s reported its first case of COVID-19 in late January. It recorded it’s 10,000th death from the virus in August.

This week, Los Angeles County reached a “terrible milestone,” with 274 additional deaths in 24 hours for a record toll of 10,056 deaths, said Dr. Barbara Ferrer, the county health director. The nation's most populated county has had about 40% of California’s virus deaths.

Most of the state is under newly extended restrictions that have closed or reduced capacity of businesses, and people are being urged to stay home as much as possible to try to slow the spread of infections.

Authorities warned they will be patrolling streets to shut down large New Year’s Eve gatherings that could spread the virus.

Meanwhile, California became the second state after Colorado to report finding a new strain of the virus that was first confirmed in the United Kingdom.

The patient, who developed symptoms on Dec. 27, is a 30-year-old San Diego County man who didn't have any history of travel, which could indicate that someone else already had brought the new strain into the state, officials said.

It is common for viruses to undergo minor changes as they reproduce and move through a population. Scientists have found no evidence that the variant is more lethal or causes more severe illness, and they believe the vaccines now being dispensed will be effective against it. But the fear is that mutations at some point will become significant enough to defeat the vaccines.

In LA County, more than 1 in 4 COVID-19 patients sent to hospitals are winding up in ICUs, according to county figures. The struggle to find places for the most seriously ill means “it’s not just the virus that’s proving fatal, but also the nightmare scenario of Angelenos dying because they cannot get the appropriate care from overwhelmed ICUs,” Ferrer said Wednesday.

The cases triggered a host of questions about how the virus variant circulating in England arrived in the U.S. and whether it is too late to stop it now, with top experts saying it is probably already spreading elsewhere in the United States.

Public health officials also began warning of stricter enforcement of stay-at-home orders that aim to reduce COVID-19 spread by keeping people from mingling outside of their households.

Los Angeles Mayor Eric Garcetti said hospitalizations and deaths linked to Christmas gatherings may show up in two or three weeks because of the infection's lag time, and any New Year’s Eve gatherings could start to overwhelm hospitals later in January in a third virus surge.

“If you mix and mingle with people outside your household, it’s likely medical care will not be available when it’s needed in a few weeks,” Garcetti said. “We will feel it in our homes, in our ICU units, and in our morgues.”

He said police will be out enforcing public health rules that prohibit large gatherings and the city had disconnected utilities on Tuesday at a “chronic party house” in the Hollywood Hills.

Gloria said he had asked police and the city attorney to pursue fines “and potentially other enforcement actions” against those who are “blatantly and egregiously” defying health orders.

Gloria praised residents who follow the rules, stay home as much as possible and wear masks when outside.

“Many have sacrificed their social lives for the greater good. Others have treated this with a sickening level of apathy as their neighbors died,” he said.