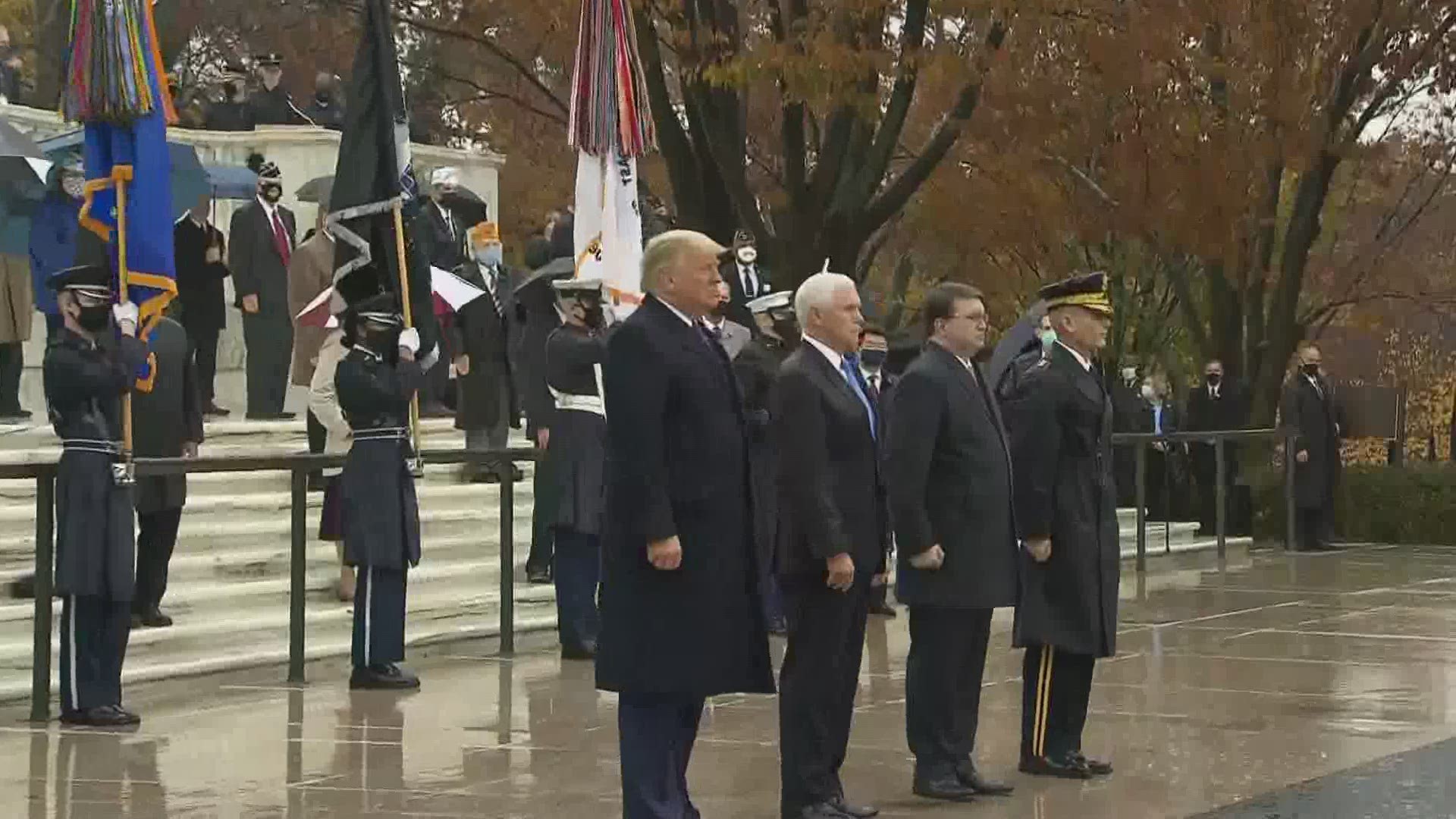 President Donald Trump participated in the Veterans Day observance at Arlington National Cemetery on Wednesday, emerging in public for the first time since his failed reelection bid to take part in the annual presidential rite.

Biden Wednesday marked Veterans Day with a visit to the Korean War Memorial in Philadelphia. The president-elect made a brief foray out with his wife, Jill, to the memorial, where he is laying a wreath.

Biden’s son Beau was a major in the Delaware Army National Guard and died in 2015 of brain cancer. Biden often spoke emotionally of his son's service on the campaign trail.

Trump has spent the last several days holed up at the White House tweeting angry, baseless claims of voter fraud after his election loss.

Trump hasn't made any public comments since President-elect Joe Biden surpassed the 270 electoral votes on Saturday needed to win the presidency. Instead, he’s offered a barrage of postings on Twitter alleging unfounded claims of irregularities in voting in several battleground states that went for Biden.

Although Trump's official schedule has been devoid of public events, Trump has made several personnel moves — firing his Defense Secretary Mark Esper and installing three staunch loyalists to top defense jobs. Meanwhile, his legal team as filed a barrage of lawsuits alleging fraud in the battleground states.

The president’s resistance to acknowledging the outcome of the race has stalled the transition process as the head of the General Services Administration, a Trump appointee, has held off on certifying Biden as the winner of the election.

The certification — known as ascertainment — frees up money for the transition and clears the way for Biden’s team to begin putting in place the transition process at agencies.

“I just think it’s an embarrassment, quite frankly,” Biden said of Trump’s refusal to acknowledge the election results.

From his Twitter account on Tuesday, Trump again raised unsupported claims of “massive ballot counting abuse” and predicted he would ultimately win the race he has already lost. Trump’s tweets were swiftly flagged by the social media network as disputed claims about election fraud.

With the exception of weekend visits to his private golf club in northern Virginia, Trump has remained at the White House since Election Day and last appeared before cameras to deliver a statement six days ago.

His allies on Capitol Hill, led by Senate Majority Leader Mitch McConnell, have encouraged the president’s baseless accusations. They signaled they are willing to let Trump spin out his election lawsuits and unsubstantiated claims of voter fraud for the next several weeks, until the states certify the elections by early December and the Electoral College meets Dec. 14.

Pence had been scheduled to travel to Sanibel, Florida, Tuesday through Saturday, according to Federal Aviation Administration, but will instead be in Washington on Wednesday. Pence’s office didn’t immediately comment on the status of his trip.

Pence has vacationed on the island along Florida’s Gulf Coast several times previously.

RELATED: Mike Pence plans trip to Florida for 'time off'