Yes. Tokyo Olympics are 'a go' despite opposition, pandemic

Japan has spent at least $15.4 billion to organize the Olympics and will want to save face and have the Tokyo Games open on July 23. 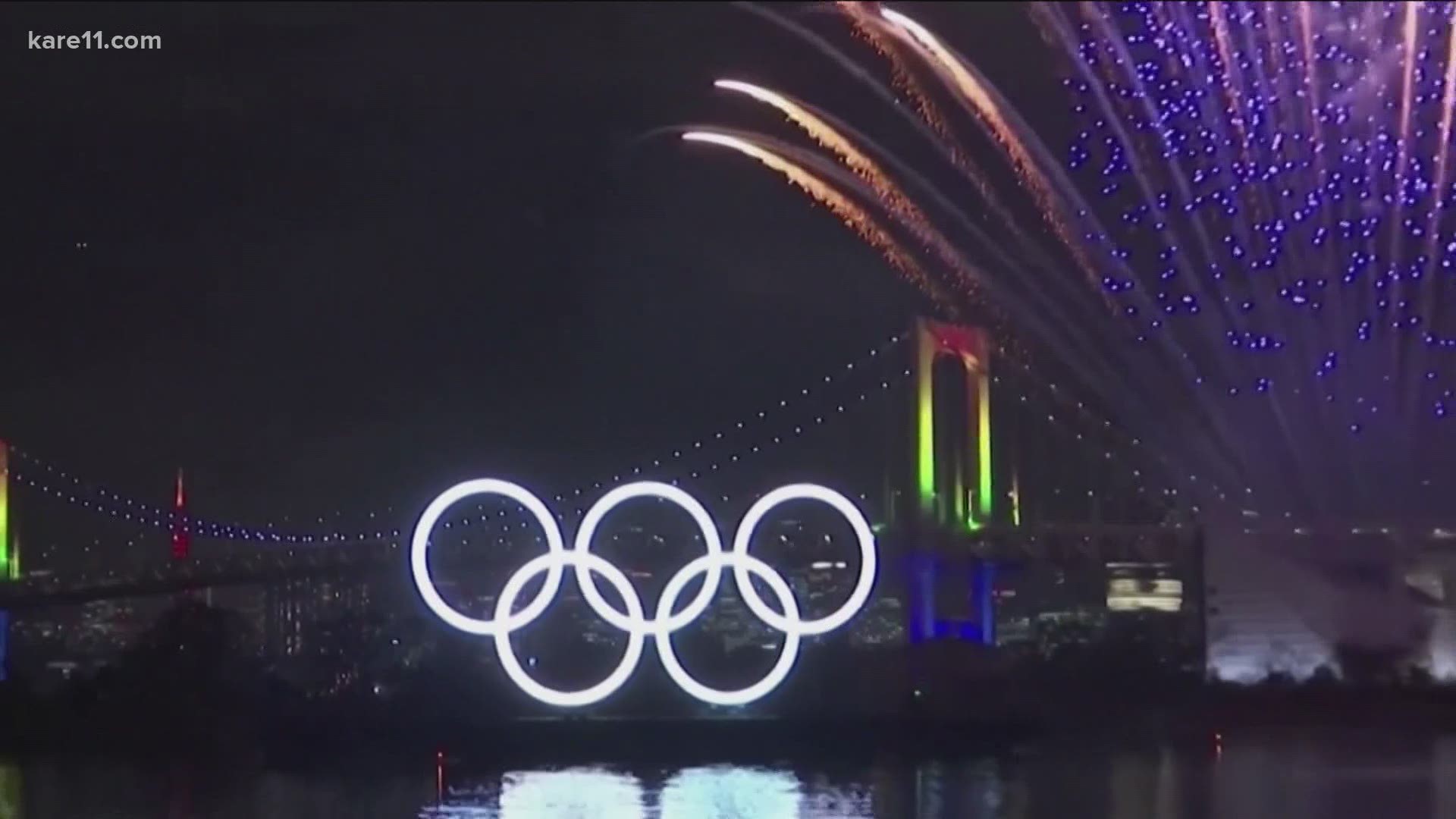 TOKYO, Japan — Will the postponed Tokyo Olympics open despite rising opposition and the pandemic?

The answer is almost certainly “yes."

Senior International Olympic Committee member Richard Pound was emphatic in an interview with a British newspaper.

“Barring Armageddon that we can’t see or anticipate, these things are a go,” Pound told the Evening Standard.

As an exclamation point, Australia’s softball team — the first major group of athletes from abroad to set up an Olympic base in Japan — arrived in Tokyo on Tuesday.

So the Olympics are barreling ahead. But why?

Start with billions of dollars at stake, a contract that overwhelmingly favors the IOC, and a decision by the Japanese government to stay the course, which might help Prime Minister Yoshihide Suga keep his job.

These factors have overridden scathing criticism from medical bodies that fear the Olympics may spread COVID-19 variants, and a call for cancellation from Asahi Shimbun, a games’ sponsor and the country’s second-largest selling newspaper. The United States Department of State has issued a Level-4 “Do not travel” warning for Japan with Tokyo and other areas under a state of emergency that expires on June 20.

And there's saving face. Japan has officially spent $15.4 billion on the Olympics, but several government audits suggest it's much more. All but $6.7 billion is public money. Geopolitical rival China is to hold the 2022 Winter Olympics just six months after Tokyo ends, and could claim centerstage should Tokyo fail.

Credit: AP
The Olympic rings are seen at the empty Odaiba waterfront in Tokyo, Tuesday, Jan. 26, 2021. The Tokyo Games, postponed in the midst of a pandemic, are scheduled to open on July 23. (AP Photo/Koji Sasahara)

A not-for-profit based in Switzerland, the IOC has ironclad control under terms of the so-called Host City Contract, and it's unlikely to cancel on its own since it would lose billions in broadcast rights and sponsorship income.

Though it portrays itself as a sporting league of nations, the IOC is a multi-billion dollar sports business that derives almost 75% of its income from selling broadcast rights. Another 18% comes from 15 top sponsors.

Andrew Zimbalist, an economist at Smith College in Massachusetts who has written extensively about the Olympics, estimates the IOC could lose about $3.5 billion-$4 billion in broadcast revenue if the Tokyo Games were canceled. He suggested a small portion of this, between $400 million and $800 million, might be made up by cancellation insurance.

“The IOC also feels a commitment by the momentum of history to do this,” Zimbalist said in an interview with The Associated Press. “Their whole DNA is saying: ‘do it, do it, do it.’ The Japanese government really does not have the right to cancel the games. They can go to the IOC and plead with them, and maybe they are doing that."

Of course, the Japanese government could stop the Olympics. It would be a public-relations disaster for the IOC to get into a legal battle with Tokyo, so any such deal would be worked out in private.

The IOC's lofty image belies myriad corruption scandals in the last several decades. The president of the Japanese Olympic Committee was forced to resign two years ago — he was also an IOC member — in a scandal linked to bribing IOC members. A similar scandal surrounded Rio de Janeiro's bid to land the 2016 Olympics.

“The Olympics are a very, very strong brand. They’re a unique brand. They’re a monopoly,” Zimbalist said. “They are not regulated by any government. All of those things have created a sense of invulnerability, perhaps."

The medical community has offered persistent but ineffective opposition. The 6,000-member Tokyo Medical Practitioners' Association asked Prime Minister Suga to cancel. So did the Japan Doctors Union, whose chairman warned the Olympics could spread variants of the coronavirus. Nurses and other medical groups have also pushed back.

Last week in a commentary, the New England Journal of Medicine said the IOC’s decision to hold the Olympics was “not informed by the best scientific evidence.” And the The British Medical Journal in an editorial in April asked organizers to “reconsider” holding the games.

An online petition demanding cancellation gathered about 400,000 signatures in a few weeks, but several street protests have mostly fizzled. Depending on how the question is phrased, 50-80% oppose the games opening.

Suga is moving ahead despite the dissension.

“The fundamental situation is that the machine has been set in motion to make this happen and politically for everyone we have passed the point of no return,” Dr. Aki Tonami, who teaches international relations at the University of Tsukuba, wrote in an email to AP.

“The Japanese system is simply not geared to make a radical U-turn at such a late point.”

She said negative public opinion was partly the fault of Suga, who has failed to bolster the Olympics as effectively as former Prime Minister Shinzo Abe.

“Politicians may well be aware of the risk they are taking but hope that once the Games begin the Japanese public will persevere ‘for the good of Japan’ and forget how we got here,” Tonami said.

The IOC always references the World Health Organization as the shield for its coronavirus guidance. The IOC has published two editions of so-called Playbooks — the final edition is out this month — spelling out protocols for athletes and everyone else during the Olympics.

Recent test events held under the protocols have faced few problems, but athletes will have to accept strict rules.

“I felt beyond safe,” American sprinter Justin Gatlin said at a test event last month in Tokyo. “I know a lot of athletes are not going to be happy with this but the measures are in place to keep everyone safe."

Japan has had many fewer COVID-19 cases than the United States or Brazil or India. Cases have grown in the last several months but have begun to come down in the last few weeks, although worries persist about variants.

Athletes and others must pass two COVID-19 tests before leaving home, another upon arrival in Japan, and then undergo repeated testing. About 15,000 Olympic and Paralympic athletes, plus added staff, will live in a bubble at the Olympic Village, training sites, and venues.

Tens of thousands of others will have to enter Japan, which has largely been sealed off during the pandemic: judges officials, media, broadcasters and the so-called Olympic Family. Local organizers say that number is now 50% of the original 180,000. Fans from abroad have already been banned, and a decision on local fans is expected this month.

The IOC says more that 80% of the residents of the Olympic Village will be vaccinated. This compares with 2-3% of the Japanese population that is fully vaccinated, and most Japanese will not be when the games open.

Japan gave shots to 200 of its Olympic athletes on Tuesday, an event held behind closed doors without much fanfare.

Despite assurances that the Olympics will be “safe and secure,” athletes are required to sign a waiver and assume risks specific to COVID-19.

Waivers were used in previous Olympics, but this one is updated with COVID language.

AP obtained a copy of the waiver, which reads in part:

"I agree that I participate in the Games at my own risk and own responsibility, including any impact on my participation to and/or performance in the Games, serious bodily injury or even death raised by the potential exposure to health hazards such the transmission of COVID-19 and other infectious disease or extreme heat conditions while attending the Games..."

Bob Costas, who covered the Olympics for NBC, suggested in a recent U.S. television interview that the games should be postponed until next year.

This has been ruled out.

The IOC says the Olympics must happen this year or not at all. The delay has already cost $2.8 billion, and the main obstacle to another postponement is the Olympics Village, where thousands of apartments have already been sold with owners waiting to move in. Dozens of venues would also have to be rebooked, and a jammed 2022 global sports schedule would have to rejiggered again.

David Wallechinsky, one of the world's best-known Olympic historians and author of the “Complete Book of the Olympics,” summed up the situation in an email to Associated Press.