Trump released the full, unedited interview earlier in the week on Facebook saying, 'Look at the bias, hatred and rudeness on behalf of 60 Minutes and CBS.' 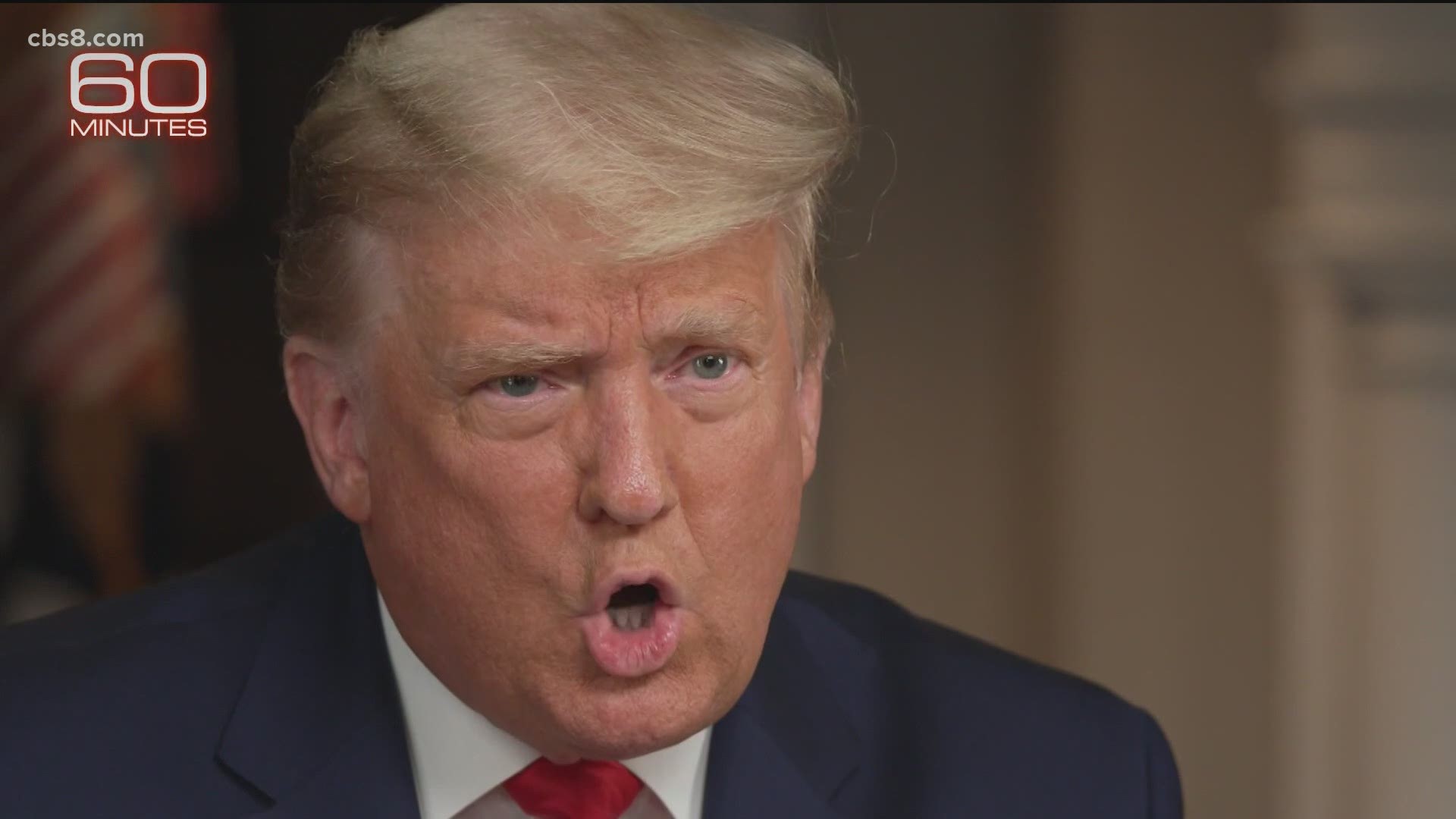 WASHINGTON — President Donald Trump has posted his full, unedited interview with CBS's “60 Minutes” on Facebook ahead of the show’s Sunday air date.

The footage shows Trump growing increasingly prickly as anchor Lesley Stahl presses him on the coronavirus pandemic, his slipping support with suburban women and other issues.

Trump tweeted with the Facebook link: “Look at the bias, hatred and rudeness on behalf of 60 Minutes and CBS." And he again preemptively criticized the moderator of Thursday’s final presidential debate.

RELATED: '60 Minutes' to interview Trump, Biden and their VPs

Look at the bias, hatred and rudeness on behalf of 60 Minutes and CBS. Tonight’s anchor, Kristen Welker, is far worse! #MAGA https://t.co/ETDJzMQg8X

The “60 Minutes” interview starts on a tense footing as Stahl asks the Republican president, “Are you ready for some tough questions?” It only grows more testy.

Trump complains, “That’s no way to talk." He later comments, “You’re so negative.”

Trump tweeted a short clip claiming Stahl wasn't wearing a mask in the White House after the interview. He added, "Much more to come."

He followed up with two tweets saying, "I am pleased to inform you that, for the sake of accuracy in reporting, I am considering posting my interview with Lesley Stahl of 60 Minutes, PRIOR TO AIRTIME! This will be done so that everybody can get a glimpse of what a FAKE and BIASED interview is all about. Everyone should compare this terrible Electoral Intrusion with the recent interviews of Sleepy Joe Biden!"

"The White House’s unprecedented decision to disregard their agreement with CBS News and release their footage will not deter 60 MINUTES from providing its full, fair and contextual reporting which presidents have participated in for decades. 60 MINUTES, the most-watched news program on television, is widely respected for bringing its hallmark fairness, deep reporting and informative context to viewers each week. Few journalists have the presidential interview experience Lesley Stahl has delivered over her decades as one of the premier correspondents in America and we look forward to audiences seeing her third interview with President Trump and subsequent interview with Vice President Pence this weekend.”

Trump is slated to debate Democrat Joe Biden on Thursday night in Nashville, Tennessee. With less than two weeks until Election Day, Democratic challenger Biden is leading most national polls and has a narrower advantage in the battleground states that could decide the race. More than 42 million people have already cast their ballots. The debate, moderated by NBC's Kristen Welker, is a final chance for both men to make their case to a television audience of tens of millions of voters.

“The rule is that last debates before the election have a big impact,” said presidential historian Michael Beschloss, who made clear the legacy of the candidates’ first faceoff: “That was the most out-of-control presidential debate we have seen.”

RELATED: Who is Kristen Welker? Meet the moderator of the final Trump-Biden debate