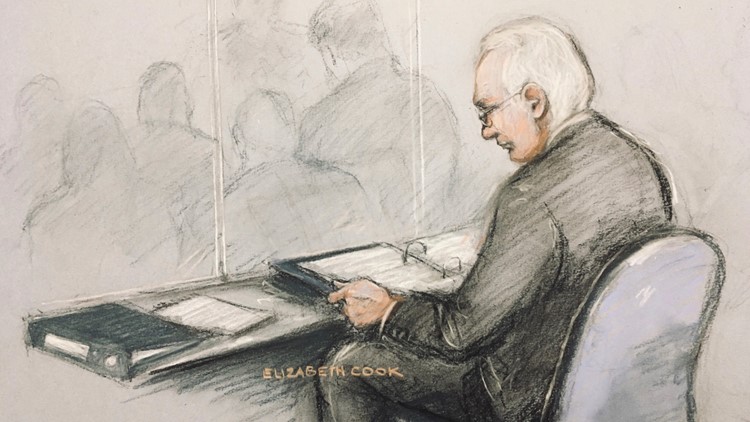 Photo by: AP
This is a court artist sketch of Wikileaks founder Julian Assange in the dock reading his papers as he appears at Belmarsh Magistrates' Court for his extradition hearing, in London, Monday, Feb. 24, 2020. The U.S. government and WikiLeaks founder Julian Assange will face off Monday in a high-security London courthouse, a decade after WikiLeaks infuriated American officials by publishing a trove of classified military documents. (Elizabeth Cook/PA via AP)

US: Free speech no excuse for crimes of WikiLeaks' Assange

The U.S. government has began outlining its extradition case against Julian Assange in a London court.

The U.S. argues that the WikiLeaks founder is not a free-speech champion but an “ordinary” criminal who put many lives at risk with his secret-spilling.

Supporters of Assange gathered Monday outside the high-security courthouse. American authorities want to try Assange on espionage charges that carry a maximum sentence of 175 years in prison. They say he conspired with army intelligence analyst Chelsea Manning to hack into a Pentagon computer and release secret files about the wars in Iraq and Afghanistan. Assange has been indicted on 18 charges.

RELATED: Lawyer: Assange was offered US pardon if he cleared Russia

The Associated Press reports that James Lewis, the lawyer representing the U.S. government, called the 2010 document leak "one of the largest compromises of classified information in the history of the United States."

"Reporting or journalism is not an excuse for criminal activities or a license to break ordinary crime laws," he added.

A final decision on extradition is not expected for months or even years.