The pope’s remarks came in a feature-length documentary called “Francesco” that premiered at the Rome Film Festival. 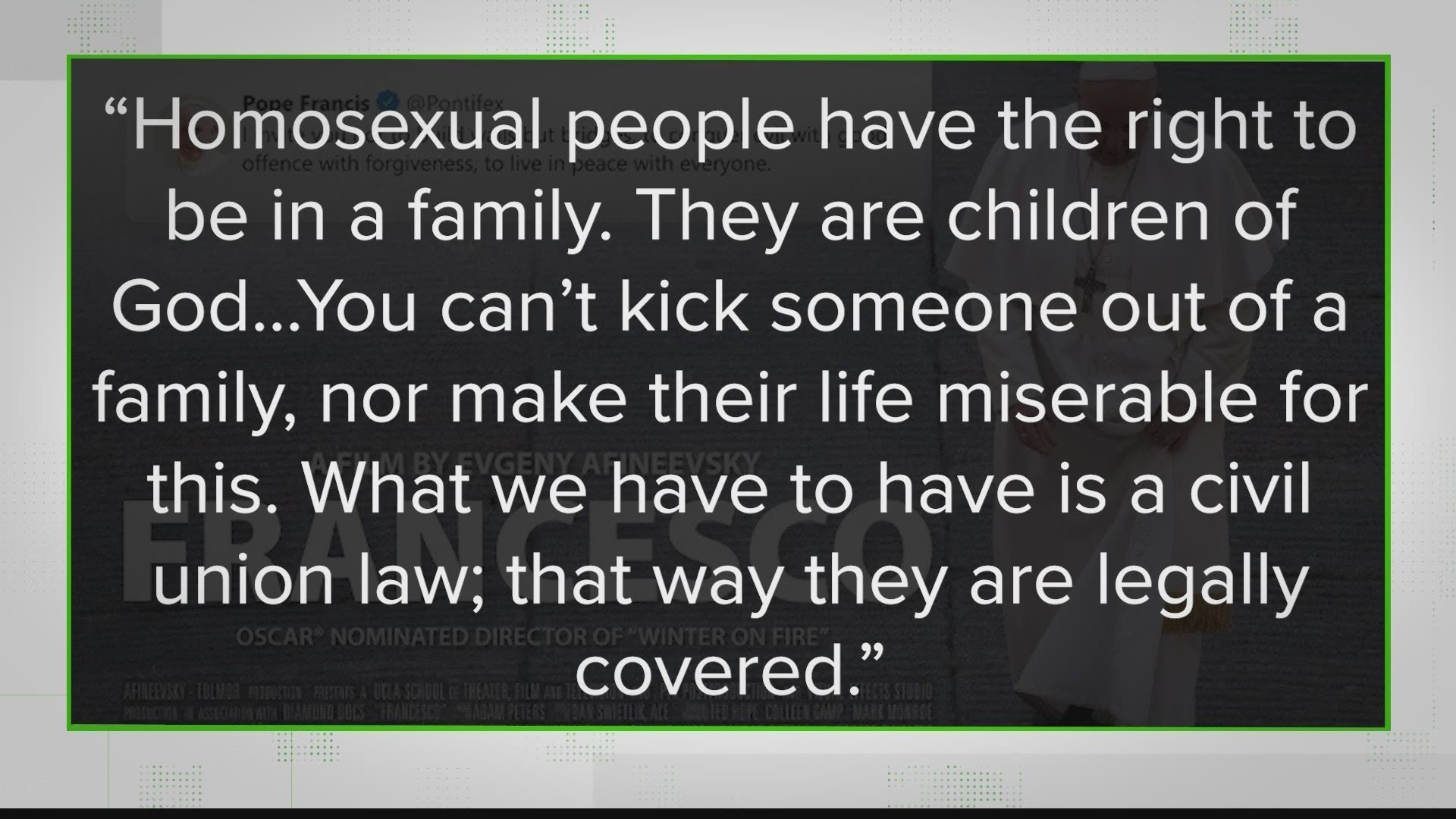 WASHINGTON — LGBTQ Catholics and their allies in the U.S. welcomed Pope Francis’ endorsement of same-sex civil unions, the first time he’s done so as pontiff, while some prominent members including a bishop said Wednesday that he was blatantly contradicting church teaching.

Bishop Thomas Tobin of Providence, Rhode Island, was one of the first conservative Catholic leaders to go public with criticism.

“The Pope’s statement clearly contradicts what has been the long-standing teaching of the Church about same-sex unions,” Tobin said in a statement. “The Church cannot support the acceptance of objectively immoral relationships.”

In contrast, Francis DeBernardo of New Ways Ministry, which represents LGBTQ Catholics, hailed the pope's comments as a “historic” shift for a church that has a record of persecuting gays.

“It is no overstatement to say that with this statement not only has the pope protected LGBTQ couples and families, but he also will save many LGBTQ lives,” DeBernardo said.

RELATED: Pope in TED talk: Earth cannot be squeezed 'like an orange’

The pope’s comments came midway through a feature-length documentary, “Francesco,” that premiered Wednesday at the Rome Film Festival.

“Homosexual people have the right to be in a family. They are children of God,” Francis says in the film. “You can’t kick someone out of a family, nor make their life miserable for this. What we have to have is a civil union law; that way they are legally covered.”

The comment came in the final lap of a U.S. election campaign in which both President Donald Trump and Democratic nominee Joe Biden have avidly courted Catholic voters. It’s not yet clear whether it could indirectly benefit Biden, whose team has run ads spotlighting his lifelong Catholicism, but some liberal-leaning faith advocates saw plenty of shared values to highlight with Francis’ message of inclusion.

Credit: AP
Pope Francis waves to faithful at the end of the weekly general audience in the Paul VI hall at the Vatican, Wednesday, Oct. 21, 2020. (AP Photo/Gregorio Borgia)

“Pope Francis’ words will highlight the inclusive, accepting essence of Christianity that so many people care about,” said Guthrie Graves-Fitzsimmons, a fellow with the faith initiative at the liberal Center for American Progress think tank.

“The way conservative Christians … distort this message of love and justice that Jesus proclaimed” can have an alienating effect, he said.

Carolyn Woo, former president of Catholic Relief Services and a co-chair of Catholics for Biden, said Francis’ emphasis on the “dignity of people,” without any conditions, aligns well with values Democrats espouse.

“Overall the Democratic platform is: We’ve got to help people where they are at. We’ve got to protect their rights, we’ve got to help them flourish,” she said, emphasizing the importance of Catholics using “prudential judgment in how we honor life.”

That view holds little sway, however, with more conservative Catholics who already take a dim view of Biden over his support for abortion rights in stark contrast with a fundamental teaching of their faith.

Another teaching confines the institution of marriage to a man and a woman — and that remains intact regardless of the pope's remarks on same-sex unions, said Brian Burch, president of the conservative group CatholicVote.

Francis “has no ability to change that teaching about the permanence and exclusivity of marriage,” Burch said, adding that he doesn’t see the comments having “explosive relevance” in the current U.S. political climate.

“Catholics who live in communion with what the church teaches understand that marriage is written into the law of nature,” Burch said. “Nothing can change that.”

Previously, when he was Archbishop Jorge Mario Bergoglio of Buenos Aires, Francis endorsed civil unions for same-sex couples as an alternative to marriage, but he had never come out publicly in favor of such unions as pope, nor had any previous pontiff.

The Rev. James Martin, a prominent Jesuit priest who has advocated for greater LGBTQ inclusion in the church, called the remarks momentous.

RELATED: Pope to UN: Use COVID crisis to come out better, not worse

“First, he is saying them as Pope, not Archbishop of Buenos Aires,” Martin tweeted. “Second, he is clearly supporting, not simply tolerating, civil unions. Third, he is saying it on camera, not privately. Historic.”

But the Rev. Donald Paul Sullins, a conservative sociology professor at the Catholic University of America, said they “directly contradict the Catholic Church’s most recent teaching on this matter."

He cited a 2003 Vatican document, approved by St. John Paul II, which says, “The Church teaches that respect for homosexual persons cannot lead in any way to approval of homosexual behavior or to legal recognition of homosexual unions.”

However polls indicate that many lay Catholics are more accepting of LGTBQ rights despite such teachings. About 6 in 10 Catholics supported government protections that would bar discrimination against LGBTQ people in workplaces, housing and schools, according to a December poll from The Associated Press-NORC Center for Public Affairs Research.

“These words from the pope will inflame many on the Catholic right ... but they will be a balm to the vast majority of Catholics and, I daresay, pastors,” said David Gibson, director of Fordham University’s Center on Religion and Culture. “They don’t want to engage in these ugly culture war battles, especially because gay Catholics are not abstractions — they are in their homes, part of their families, and part of their parishes.”

Francis’ remarks seem to undercut the policies of some Catholic institutions prohibiting employees from entering into same-sex marriages.

Natalia Imperatori-Lee, a religious studies professor at Manhattan College, expressed hope that the pope’s remarks “will prompt Catholic institutions to stop firing teachers, catechists, music ministers and others who are part of the LGBTQ community and a vital part of the Catholic community as well.”

The largest Protestant denomination in the U.S., the Southern Baptist Convention, shares the Catholic Church’s official opposition to same-sex marriage and civil unions, and several of its leaders also criticized Francis.

The comments “reveal another sign of the recklessness of this papacy and demonstrates the undermining of the truth, doctrine, and moral logic of his own church,” said the Rev. Al Mohler, president of the Southern Baptist Theological Seminary.

“Given the influence of that church worldwide," Mohler continued, “it will weaken Christian witness to marriage and sexuality and gender according to God’s will and God’s Word.”