Edward Gallagher trial: Prosecutor tells jury to use SEAL's own words to convict him

The case of Special Operations Chief Edward Gallagher, a Bronze Star recipient, is now in the hands of a jury of five Marines and two sailors, including a SEAL. 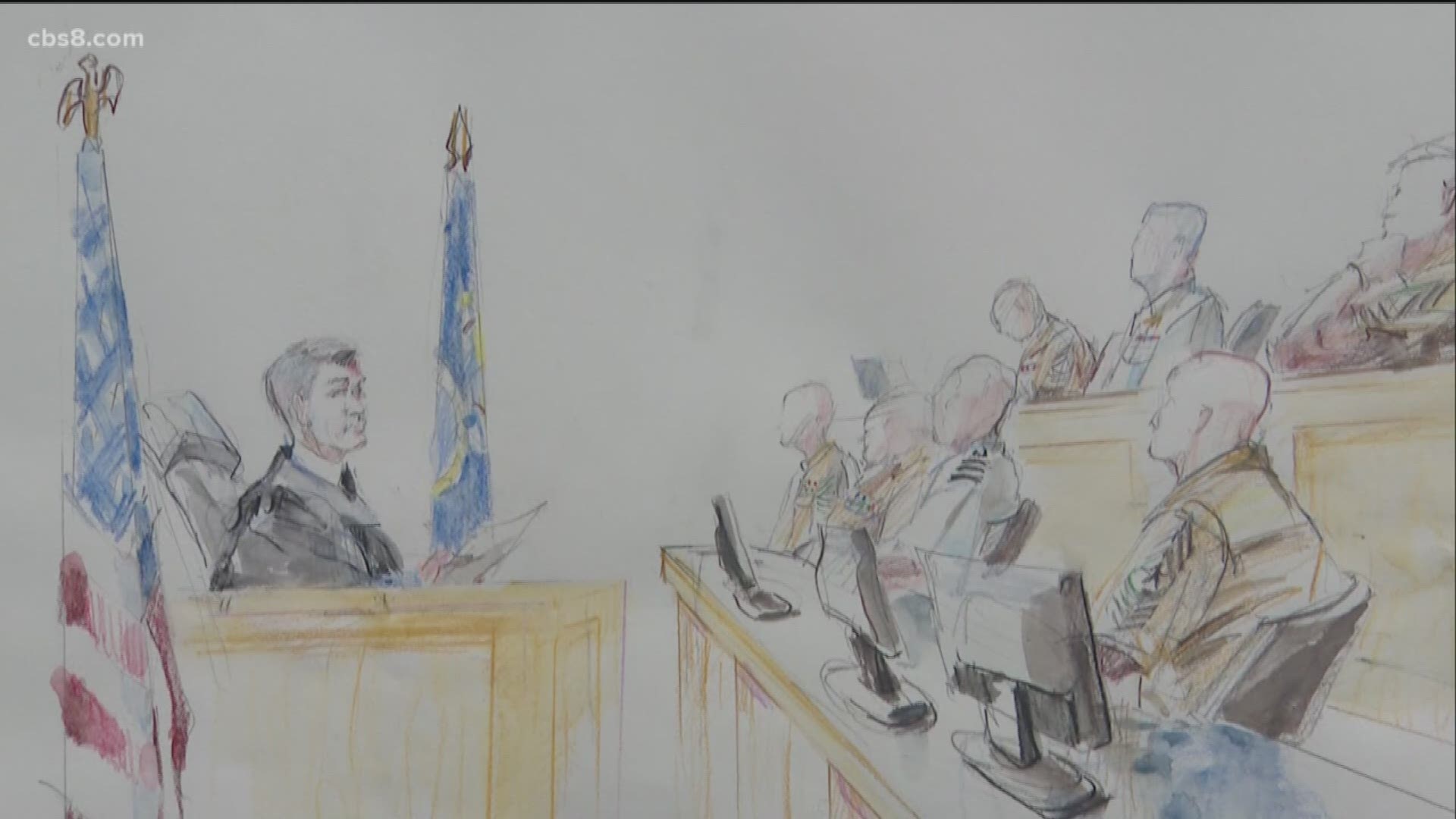 SAN DIEGO — A Navy SEAL murdered a wounded war prisoner in Iraq in 2017 and the proof is his own words, his own photos and the testimony of his fellow troops, a military prosecutor told a jury Monday, while defense lawyers called it a "mutiny" by entitled, junior SEALs trying to oust a demanding chief.

The case of Special Operations Chief Edward Gallagher, a Bronze Star recipient, is now in the hands of a jury of five Marines and two sailors, including a SEAL, many of whom had been in heavy combat in Iraq.

Both sides told jurors that witnesses had lied on the stand and it was their duty to push through the evidence to find the truth. The panel will weigh whether Gallagher, a 19-year veteran on his eighth deployment, went off the rails and fatally stabbed the war prisoner on May 3, 2017, as a kind of trophy kill, or was the victim of allegations fabricated after the platoon returned to San Diego to stop him from getting a Silver Star and being promoted.

The two-week trial included the testimonies of nearly a dozen SEALs, including Special Operator Corey Scott, a medic like Gallagher, who told the court that he saw the chief stab the Islamic State militant in the neck but stunned the court when he said he was the one who ultimately killed the prisoner by plugging his breathing tube with his thumb as an act of mercy.

Seven SEALs said Gallagher unexpectedly stabbed the prisoner, moments after he and the other medics treated the detainee. Two, including Scott, testified they saw Gallagher plunge his knife into the prisoner's neck.

Under the military justice system, the prosecution needs two-thirds of the jury, or in this case five jurors, to agree to a guilty verdict to convict or they must acquit him. They can also convict him of lesser charges, such as attempted murder.

One message said: "I've got a cool story for you when I get back. I've got my knife skills on." Another text stated: "Good story behind this. Got him with my hunting knife."

He then showed a photo of the dead prisoner with Gallagher holding up his head by the hair.

The prosecutor said the witness who changed his story and claimed to have killed the prisoner himself was lying to protect Gallagher.

He acknowledged that the victim — a 17-year-old Islamic State fighter wounded in an airstrike — is not sympathetic.

"Before the air strike, he would have done anything in his power to kill an American," Pietrzyk said, but he said the care of war prisoners is what sets U.S. forces apart.

"We're not ISIS. When we capture someone and they're out of the fight, that's it. That's where the line is drawn," Pietrzyk said.

Prosecutors also said the Navy SEALS who did testify in the trial "risked it all" and told the truth about what happened because they chose "the truth" over loyalty to Chief Gallagher.

During the trial, it was revealed that nearly all the platoon members readily posed for photos with the dead prisoner and watched as Gallagher read his reenlistment oath near the body in an impromptu ceremony.

Defense lawyer Tim Parlatore began his closing argument the same way he started the trial. "This is case is not about murder, it's about mutiny." Parlatore said.

The attorney said there's no body, no forensics, and the SEALs who testified against Gallagher lied because they didn't like his demanding leadership. He called the pictures of Gallagher clutching the corpse's hair and his texts about his knife skills just the dark humor of a warrior.

Parlatore also contended that investigators never asked Scott about the cause of the death, which is why they were surprised by his testimony.

"They didn't even listen to their own witness," Parlatore said.

The defense showed videos clips by an Iraq TV crew of the prisoner being interviewed after he was hit, then arriving at the SEAL compound and being handed over to the SEALs by the Iraqi troops. It also showed Gallagher pulling out his medical bag and treating the detainee.

An Iraqi general who handed the wounded prisoner to the SEALs testified that Gallagher did not stab the boy. And Marine Staff Sgt. Giorgio Kirylo said after the militant died that he moved the body to take a "cool guy trophy" photo with it and saw no stab wounds on his neck.

Gallagher's attorneys said there are a number of things that could have caused the militant's death, including internal injuries from the blast.

Defense attorney Marc Mukasey called it "a weak, evil, Hail Mary farce of a case" that never should have made it to the court.

"The government wants you to believe that Chief Gallagher flipped from Dr. Jekyll, a life saver, to Mr. Hyde, the murderer, in a split second," he said.

The defense contends that the case is the product of a botched NCIS investigation based on the false premise of Gallagher's guilt. They said the government failed in an "epic way" to prove their case.

Gallagher and his wife, Andrea, hugged and kissed over the bar of the court's gallery after the arguments finished.

Most of the witnesses were granted immunity to protect them from being prosecuted for acts they described on the stand.

Lt. Jacob Portier, the officer in charge, has been charged separately for overseeing the reenlistment ceremony and not reporting the alleged stabbing.

The jury received the case around 3:45 p.m. and deliberations continued until the jury went home around 6 p.m. Deliberations are expected to resume Tuesday at 8:30 a.m.