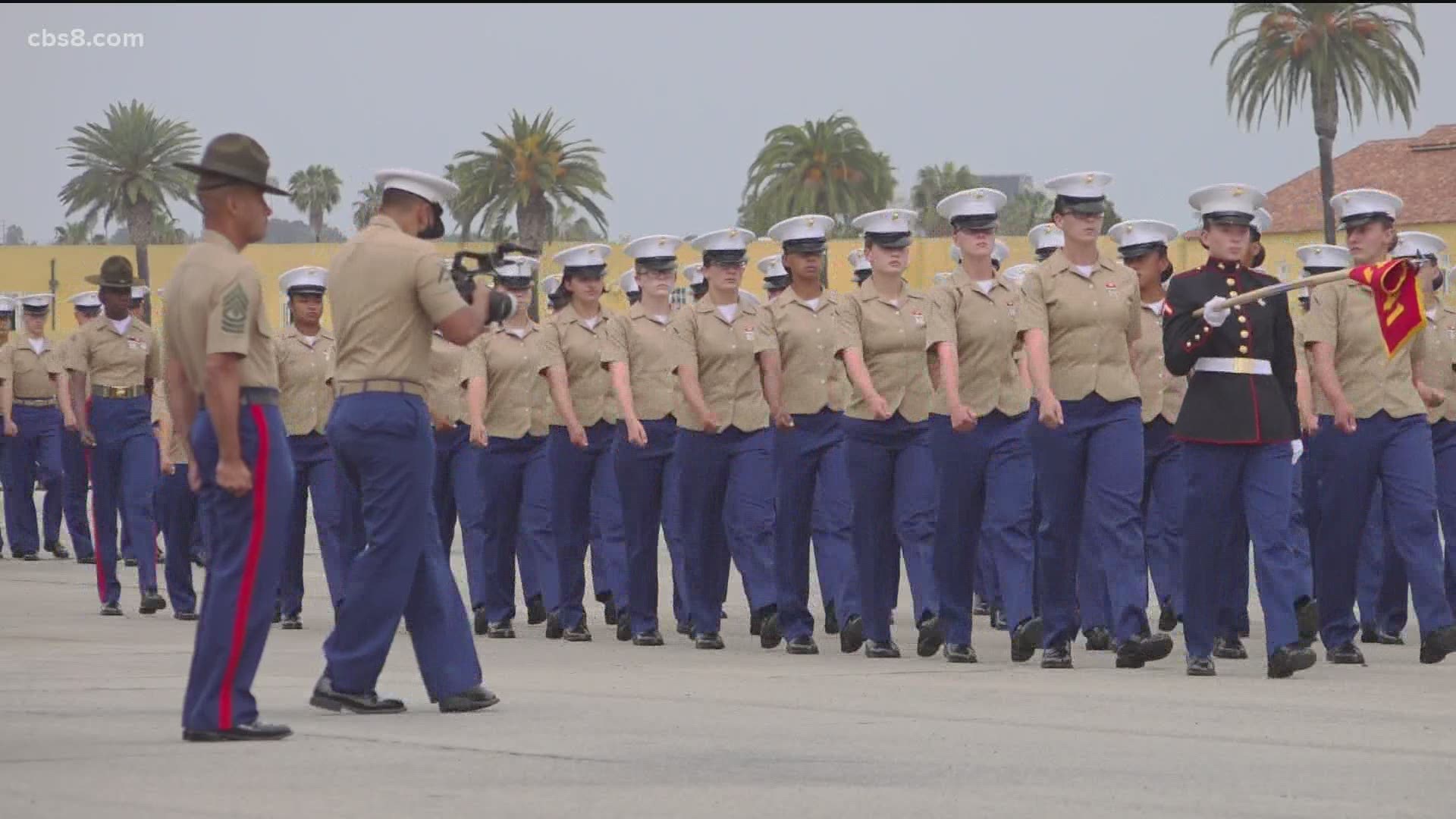 “I am feeling overjoyed quite a bit. It’s unbelievable. It feels like a dream I am floating on here,” said Marine Private First Class Raymie Auldridge.

Hawaii-born, Marshall Islands-raised Teia Chutaro, 18, prepared herself for this day.

"Once you finally get here, you are just in awe. To make history honestly, I have no words, I’m just extremely proud of what we have accomplished here, and it’s open doors for future women,” Chutaro said.

News 8 first met Chutaro in February, fresh off the bus to boot camp at Marine Corp Recruit Depot, MCRD San Diego. Three months ago, Chutaro said she was going to make it because she was tough, and her words proved true.

She and 396 other marine recruits quickly learned the military ins and outs in an intense 13-week training. Five male platoons, and the first-ever female platoon of the Western United States were together. This inaugural co-ed crew pushed themselves to the limit to become the “Few and the Proud.”

During the boot camp's last day called the "Crucible," the group completed a 45-mile hike while carrying 55-pound bags with rifles in 54 consecutive hours, defeating the odds.

Big #Congrats to the 1st Female #Marines ever to graduate in the Western U.S. at @MCRD_SD ! These 53 women make up the first integrated company of 497. They made it through the rigorous 13-week boot camp and succeeded! 👏🏾🎉 @CBS8 @DeskEight @sdbrichards pic.twitter.com/IEfWwo9Qi5

The steep hills were a big challenge ending with the most staggering of all infamously called the “reaper.”

“It was really hard and made me feel the burn in my legs,” said 19-year-old Poway Native AnneMargret Frazier, who followed in her Marine father's footsteps, as he once used to be a drill sergeant.

The hike broke both of Raymie Auldridge’s femurs, and she stands at just 4'11" while wearing a small size 3 boot.

"I have been in pain of course, yes, but I am also feeling very proud and confident," Auldridge said,

Determined to the end, all 53 women and 344 men of the Lima Company finished strong. Some did not make it. The women lost seven along the way as they started off with 60.

Following the "Crucible,” each Marine recruit went from civilian to Marine by receiving the coveted eagle, globe and anchor symbol that brought some to tears. The group joined together in singing in unison, "We are proud to claim the title of United States Marine."

It all came full circle at their Graduation Day ceremony as the 397 new marines marched in the parade. They stood proud as their family sat in the stands all smiles.

And even the MCRD mascot, “Manny,” an English bulldog from Fallbrook was on hand for the big occasion. MCRD conducts about 40 marine graduations each year in its 100 year existence.

Lt. Colonel Anthony Bariletti announced, "Proudly introduce to you the 397 young men and women who through their blood, sweat, and tears are now and forever will proud to claim the title of Marine.”

“Not many people get to experience it, and not many people achieve the title of United States Marine, so being here today, I am extremely proud,” Chutaro said.

Bariletti closed by saying, “Semper Fidelis, congratulations for making history and welcome to our Corps.”

Eagerly standing in company lines with no cell phone access for 13 full weeks and no family contact, Platoon 3241 was ecstatic to finally be dismissed. Each ran swiftly to locate family and friends who traveled to San Diego amid the pandemic to watch them make history at graduation.

Auldridge was so excited to see her sister from Texas, once the two hugged, her hat was knocked off. She said both her legs were still in pain while marching in the ceremony, but she made it.

“It feels insane to be here, standing on this parade deck finally walking off to know that we became United States Marines today on this deck. This is the beginning of my journey to finish it off even stronger,” Auldridge said.

The female Marines are showing women all over that this major feat can be achieved.

“It’s an opportunity I never thought I would have, but it is awesome to make history. It is possible and since it has been done, it can be done,” said Frazier.

The training does not end there, next the company will begin Marine Corps infantry training at Camp Pendleton.

WATCH: News 8's Neda Iranpour sits down with one of the first women to graduate at MCRD