"I've been gone away from them for almost a year now, so I wanted to do something where we could look back on this one day and remember this." 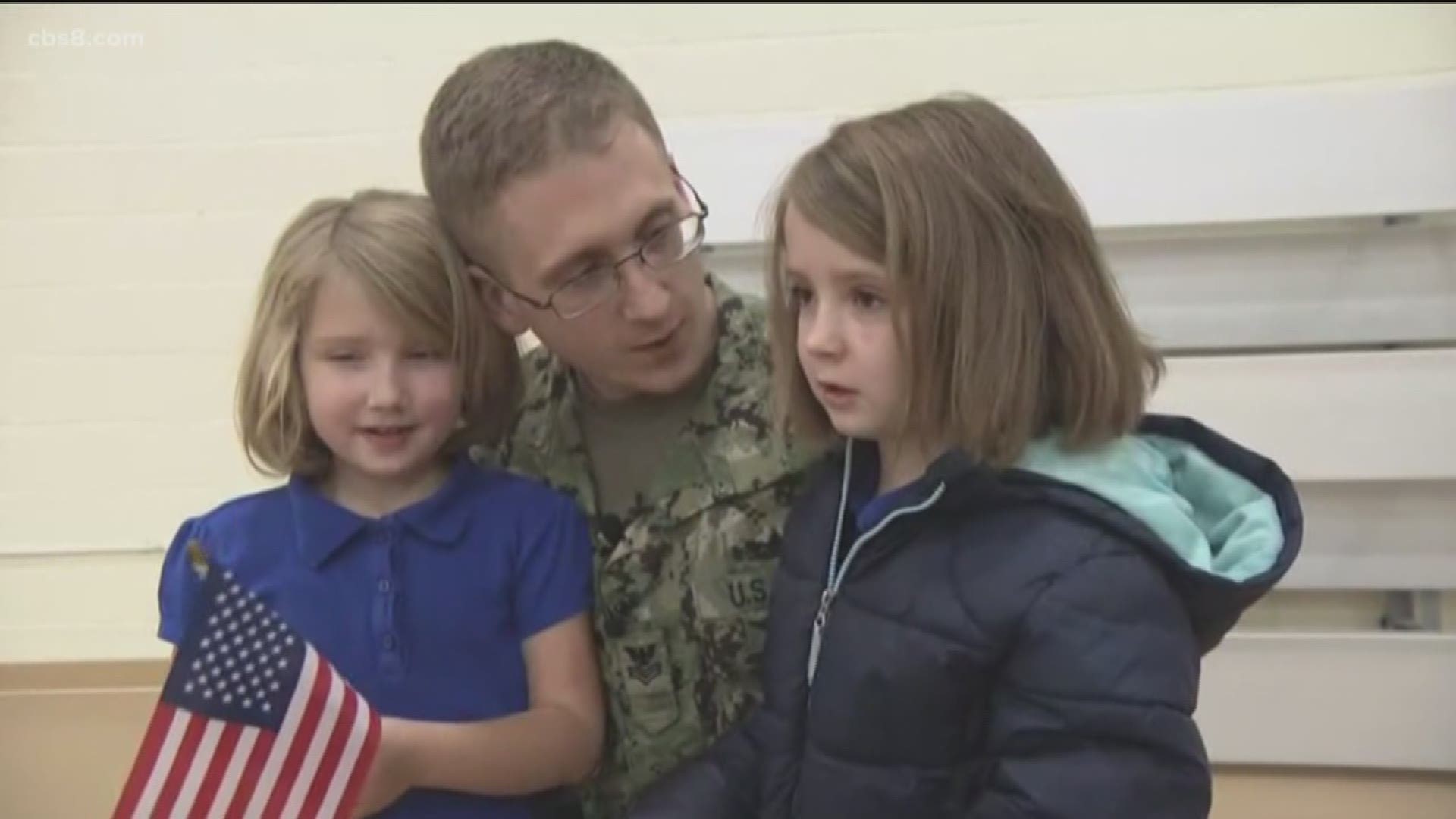 VISTA, Calif. — A U.S. Navy sailor returned from deployment on Tuesday and surprised his two daughters at their school. Petty Officer First Class Cody Cowley has been away from his family for nearly 10 months, after his deployment at sea was extended three times.

Cowley's daughters attend Springs Charter Schools in Vista, where Principal Sarah Adams helped him pull of the big surprise at an assembly. She announced a "special guest" was there and that's when Cowley walked out from behind a black curtain. His daughters, Lennon and Lilly, ran over to hug him, exclaiming, "Daddy!" and telling him how much they missed him. The girls are in kindergarten and first grade.

"Incredible, overwhelmed, can't put it into words," Cowley said as he described the moment he reunited with his daughters.

Lennon asked why their mom was crying while recording the reunion on her cell phone. "Because she's happy crying," replied Cowley.

The surprise homecoming was a surprise for his wife Katie, too. Cowley landed in San Diego  Tuesday morning, and drove straight to a restaurant.

" A girlfriend and I were at lunch and he brought me my lunch and almost made me cry my fake eyelashes off, he sure did," Katie said. The two of them then went to the girls' school to surprise them.

Cowley, a Master-At-Arms in charge of law enforcement and security, served on board the USS Abraham Lincoln, which set a record for the longest deployment since the Cold War. Cowley wasn't expected home until sometime next week, but was able to take leave early, fly from Hawaii to San Diego and rejoin his family.

"I missed their birthdays, the start of a new school, them moving over here by themselves," Cowley said, adding, "They had to do it all while I was on ship."

When he left on April 1st of last year, they all lived in Norfolk, Virginia. The ship's home port has since changed to San Diego, which makes this homecoming to a brand new home that much more meaningful.

Katie said of the reunion, "to be able to get it on video has been awesome as well, so these are memories that we'll have for a lifetime."

The assembly at the school's Vista Student Center began with a color guard presentation by the Vista High School AF JROTC, along with the reciting of Pledge of Allegiance by the school children, who are part of the La Fuente 50/50 dual immersion Spanish/English program .