Prosecutor: Navy SEAL bragged he 'got' victim with knife

"Good story behind this," Gallagher wrote. "Got him with my hunting knife." 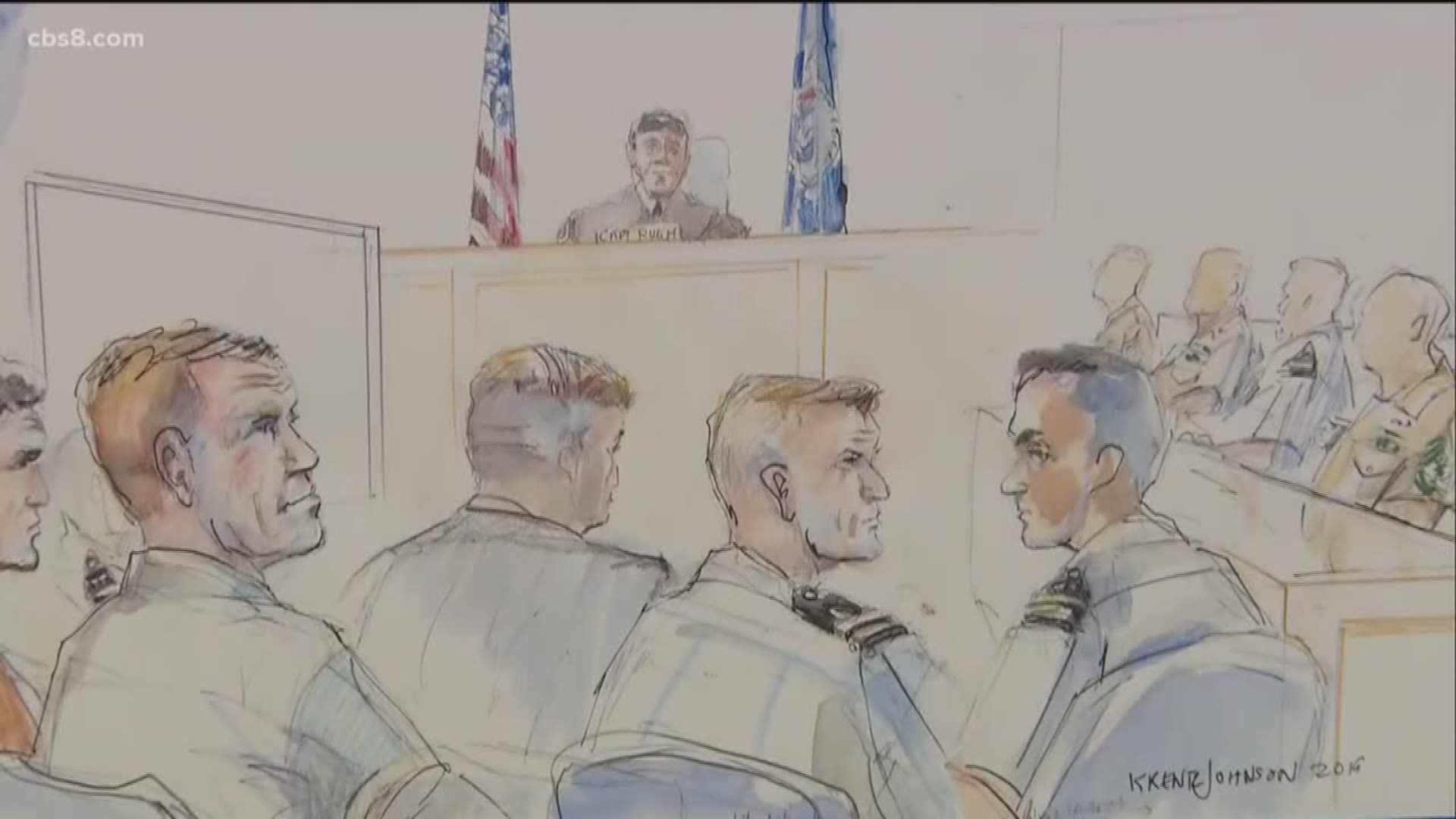 SAN DIEGO (AP) — A decorated Navy SEAL stabbed to death a wounded and captive teenage Islamic State fighter in Iraq and then bragged about it, a military prosecutor told jurors Tuesday during opening statements in a politically charged court-martial.

Lt. Brian John projected a photo of the dead prisoner in the military courtroom, along with a text message Special Operations Chief Edward Gallagher sent to friends with the image.

"Good story behind this," Gallagher wrote. "Got him with my hunting knife."

The defense told the jury that Gallagher treated the militant's wounds and didn't kill him.

Attorney Tim Parlatore, who has claimed the text was an attempt at dark humor, said there's no body, autopsy or forensic evidence to show a killing happened. He says the case was built on lies by junior SEALs who hated Gallagher because he was tough.

"This case is not about murder," Parlatore said. "It's about mutiny. He didn't murder or attempt to murder anyone."

Gallagher, whose case has drawn President Donald Trump's attention, faces seven counts that include premeditated murder and attempted murder. He's also accused of shooting two civilians — an elderly man and a school-age girl — from sniper perches in Iraq in 2017. He has pleaded not guilty and could face a life sentence.

The trial, which is expected to last up to three weeks, is exposing fractures in the secrecy that typically shrouds the elite special forces as fellow troops testify against Gallagher, who had served eight tours of duty and earned two Bronze Stars for valor.

Lt. Thomas MacNeil, who has roomed with Gallagher, testified that their SEAL team provided support to Iraqi forces clearing an area outside Mosul when he heard a radio transmission on May 3, 2017, that an airstrike had wounded an Islamic State fighter.

Gallagher initially began treating the teen militant's wounds, which was caught on video the jury will see, prosecutors said. The question is what happened after the footage stopped.

John said the wounded prisoner, described as a curly-haired adolescent, was in stable condition after treatment.

After another SEAL left his side, Gallagher pulled a knife from his medical bag and repeatedly stabbed the boy in the neck, John said. Another SEAL saw the assault and said blood was pouring out of the teen.

Parlatore said the militant died of his injuries from the airstrike and noted that Iraqi forces had been with him two hours before Gallagher became the first to treat him.

After the boy died, Gallagher had his re-enlistment ceremony conducted with the body and posed with fellow troops for photos.

Gallagher held the detainee by the hair with one hand and his knife in the other as photos were shot, said MacNeil, who posed in some pictures with the body.

MacNeil testified that the photos were inappropriate because he was taught to not disgrace casualties on the battlefield.

The defense does not dispute that Gallagher posed with the corpse.

The jury is composed of five enlisted men, including a Navy SEAL and four Marines, plus a Navy commander and a Marine chief warrant officer. Most of the jurors have served in conflicts in Iraq and Afghanistan.

Gallagher's defense has been championed by his family and some congressional Republicans who have claimed that he's a hero getting railroaded. Trump intervened to get Gallagher removed from the brig as he awaited trial and is said to be considering a pardon for him.

Gallagher's accusers are cowards who wanted to derail his nomination for a Silver Star for valor and a promotion to teach urban warfare, Parlatore said.

MacNeil said Gallagher and Lt. Jacob Portier ordered other sailors to delete photos of the militant.

Portier faces a separate trial on charges of conduct unbecoming an officer for holding Gallagher's re-enlistment ceremony with the body.

After returning to San Diego from their deployment, MacNeil said he got a text to stay after work one day for a meeting in the parking lot, where he encountered Portier and Gallagher.

He said Gallagher rushed at him, grabbed his face and said, "You take me down, I'll take all you down."