San Diego honors veterans across the county with events and parades

Multiple events were held across San Diego County Wednesday to honor those who served in the Armed Forces. 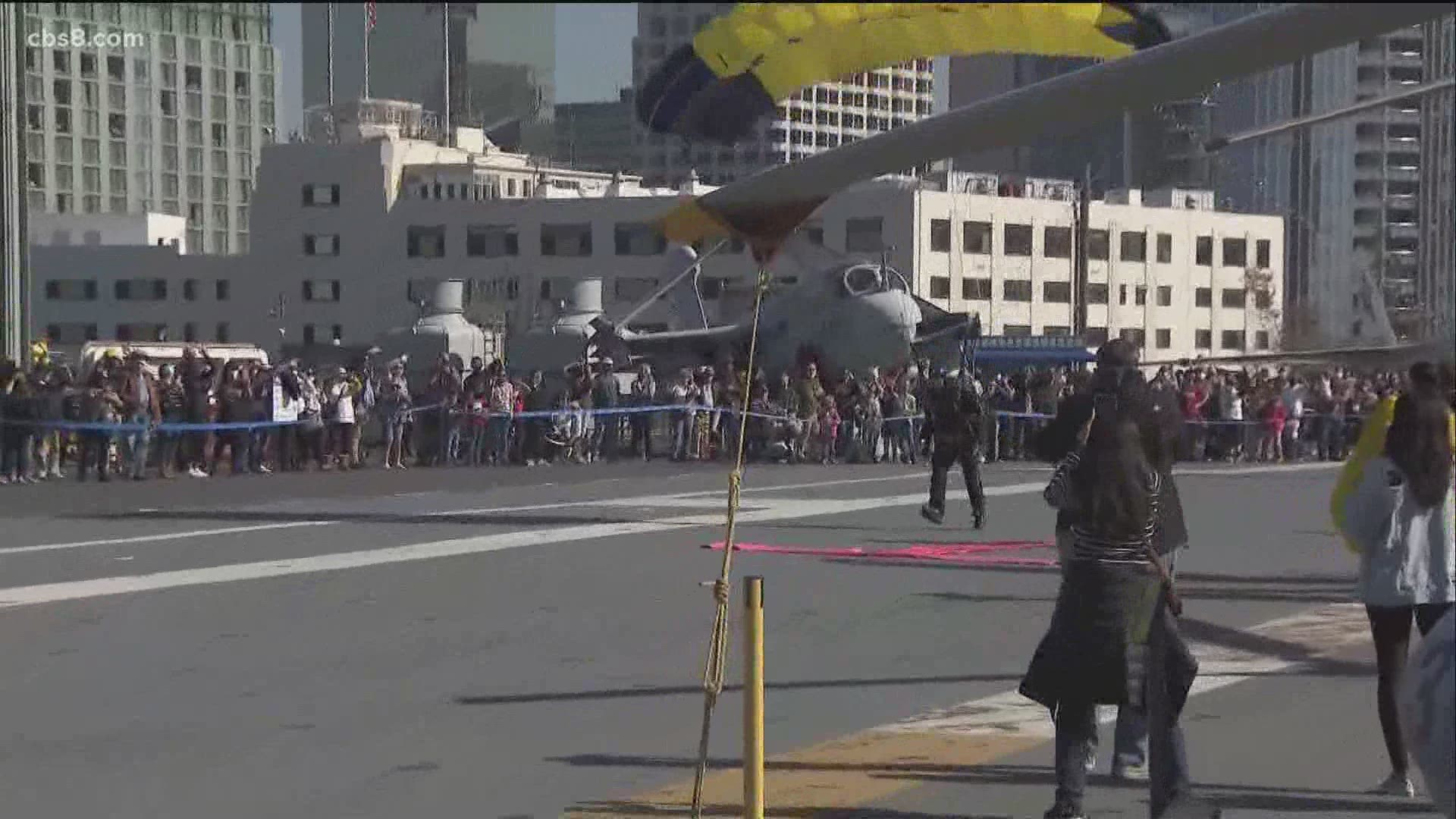 SAN DIEGO COUNTY, Calif. — As a county with the third highest population of veterans in the United States, San Diego County held multiple events Wednesday meant to honor those who served in the Armed Forces.

The USS Midway Museum held a variety of events, including two precision parachute jumps by the U.S. Navy's "Leap Frogs" onto the ship's flight deck at 10 a.m. and 1 p.m. Along with active-duty Navy SEALS, the parachuting demonstration included a SEAL veteran.

Watch: After following a car chase through San Diego streets, Chopper 8 left after the victim was in custody and captured the Navy Leap Frogs as they parachuted and landed aboard the USS Midway as part of the Fleet Week Veterans Day Boat Parade.

The San Diego Blood Bank had its mobile tent outside the Midway Museum. Donors will receive one ticket for entry into the museum. Veterans and active duty military will get free admission all day.

Lastly, in celebration of the 75th anniversary of the end of World War II, the USS Midway Museum conducted a special broadcast of its "Destination Midway" live webcast series at 12:30 p.m. The webcast featured ship historian Karl Zingheim as he interviewed four WWII veterans.

-- A Veterans Day boat parade hosted by Fleet Week San Diego. The parade provides an opportunity to celebrate the men and women who have served and are currently serving. It featured boats of all sizes decorated to salute and honor veterans and members of the military.

The parade took place on San Diego Bay starting at 10 a.m. and proceed from Shelter Island under the skyline of Downtown San Diego and work its way up to the Coronado Bridge where it will cross the Bay and proceed south along the Coronado Shoreline. There was live demonstrations by the U.S. Coast Guard as well as vintage Aircraft Flyovers and other attractions on the bay.

Chopper 8 flew over the boat parade.

-- Meals on Wheels San Diego County, a nonprofit organization that supports the independence and well-being of seniors in need by delivering them nutritious meals, will make a special delivery to honor an Oceanside veteran.

Brent Wakefield, president and CEO of Meals on Wheels San Diego County, will deliver meals to World War II Navy veteran Ed Kruck and thank him for his service. Additionally, his son, Ed Jr. -- who is also a Vietnam War veteran -- will join him.

-- Honor Flight San Diego will host a "Parade of Honor." The socially-distanced, no-contact, drive-thru parade through the Kearny Mesa neighborhood is for military veterans of all eras.

-- All San Diego administrative offices will be closed for the Veterans Day federal holiday.

Curbside trash, recyclables and yard waste will be collected as scheduled for customers served by the city's Environmental Services Department. The city's Miramar Landfill will be open.

Torrey Pines, Mission Bay and Balboa Park golf courses will be open normal hours. In honor of veterans, weekday rates will be applied. All city skate parks will be open.

Parking meters, time restrictions for parking on streets and yellow zones within San Diego will not be enforced. Red, white and blue zones are still enforced every day. Parking rules on Port of San Diego property and in different cities may vary.