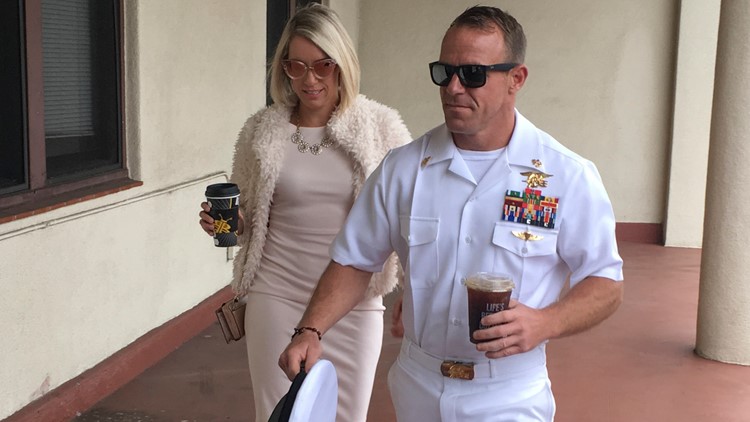 Photo by: AP
Navy Special Operations Chief Edward Gallagher, right, walks with his wife, Andrea Gallagher as they arrive to military court on Naval Base San Diego, Monday, June 24, 2019, in San Diego. Trial continues in the court-martial of the decorated Navy SEAL, who is accused of stabbing to death a wounded teenage Islamic State prisoner and wounding two civilians in Iraq in 2017. He has pleaded not guilty to murder and attempted murder, charges that carry a potential life sentence. (AP Photo/Julie Watson)

Navy officials on Wednesday notified a SEAL convicted of posing with a dead Islamic State militant and three of his superior officers during a 2017 deployment to Iraq that all four will face a review to determine if they should remain on the elite force.

Attorneys for Chief Petty Officer Edward Gallagher said the Navy is trying to remove his Trident pin, designating him as a SEAL, in retaliation for President Donald Trump’s decision last week to restore his rank.

Gallagher was acquitted last summer of a murder charge in the stabbing death of the militant captive, but a military jury convicted him of posing with the corpse while in Iraq in 2017. He also was acquitted of attempted murder for allegedly shooting at civilians.

His lawyers said Wednesday they have filed a complaint with the inspector general’s office accusing Rear Adm. Collin Green of insubordination for defying Trump’s actions and asking for an investigation into the Navy’s handling of Gallagher’s case. Green is the Naval Special Warfare commander.

It was the latest twist in what has been a tumultuous case that has shaken the secretive SEAL community and revealed rifts within its ranks after SEALs testified against one of their own. The case was dogged from the start with the Navy’s lead prosecutor being removed in the middle of the court-martial after it was discovered the prosecution was tracking the defense team’s emails.

Trump restored Gallagher’s rank on Friday after he was demoted from chief following his conviction. “What the bureaucracy is doing to him now is pure and simple retaliation,” said Marc Mukasey, one of Gallagher’s lawyers.

Two U.S. officials familiar with the case but not authorized to speak publicly disputed that and said discussions about convening a review board began shortly after Gallagher’s conviction in July.

Eugene Fidell, who teaches military justice at Yale Law School, said he's not surprised the Navy would call for a review. "I think this would have happened anyway to a SEAL with a court-martial conviction," he said.

In a letter from Green, obtained by The Associated Press, Gallagher was notified that a peer-review board has been instructed to determine whether he should remain a SEAL.

The five-person board will convene Dec. 2 behind closed doors. It will include one SEAL officer and four senior enlisted SEALs, according to the two U.S. officials. Gallagher can appear once before the board on Dec. 4 but without his lawyers. He can dispute the evidence given to the board that will include his conviction and call witnesses. He also can appeal the final decision that will be made by the Naval Personnel Board, which will take into account Green’s input and the board’s recommendations.

Removing their Trident pins means they will no longer be SEALs but could remain in the Navy, though Portier and Gallagher were already planning on leaving the service. Still it would be considered a mark on their career that they were cast out of the prestigious force.

The other three officers will go before three-person boards. Attorneys for Breisch and MacNeil could not be immediately reached for comment.

According to Portier’s letter, his review board has been instructed to specifically look at Portier's 2017 deployment in Iraq and his actions through July 2019 to see if he "displayed a gross lack of professional or personal judgment, lack of moral or ethical behavior and/or conduct inconsistent with the SEAL ethos."

Portier was Gallagher’s platoon commander and was charged with failing to report the alleged murder. He denied the charges and they were dropped after the jury acquitted Gallagher of murder.

His attorney, Jeremiah Sullivan said Trump recognizes “the honorable sacrifices that my client has made in his combat deployments,” and that Green is challenging the “integrity of the president.”

Naval Special Warfare spokeswoman, Capt. Tamara Lawrence, said in a statement that Green “remains focused on delivering a capable, ready, and lethal maritime special operations force in support of national security objectives, which includes assessing the suitability of any member of his force via administrative processes.”