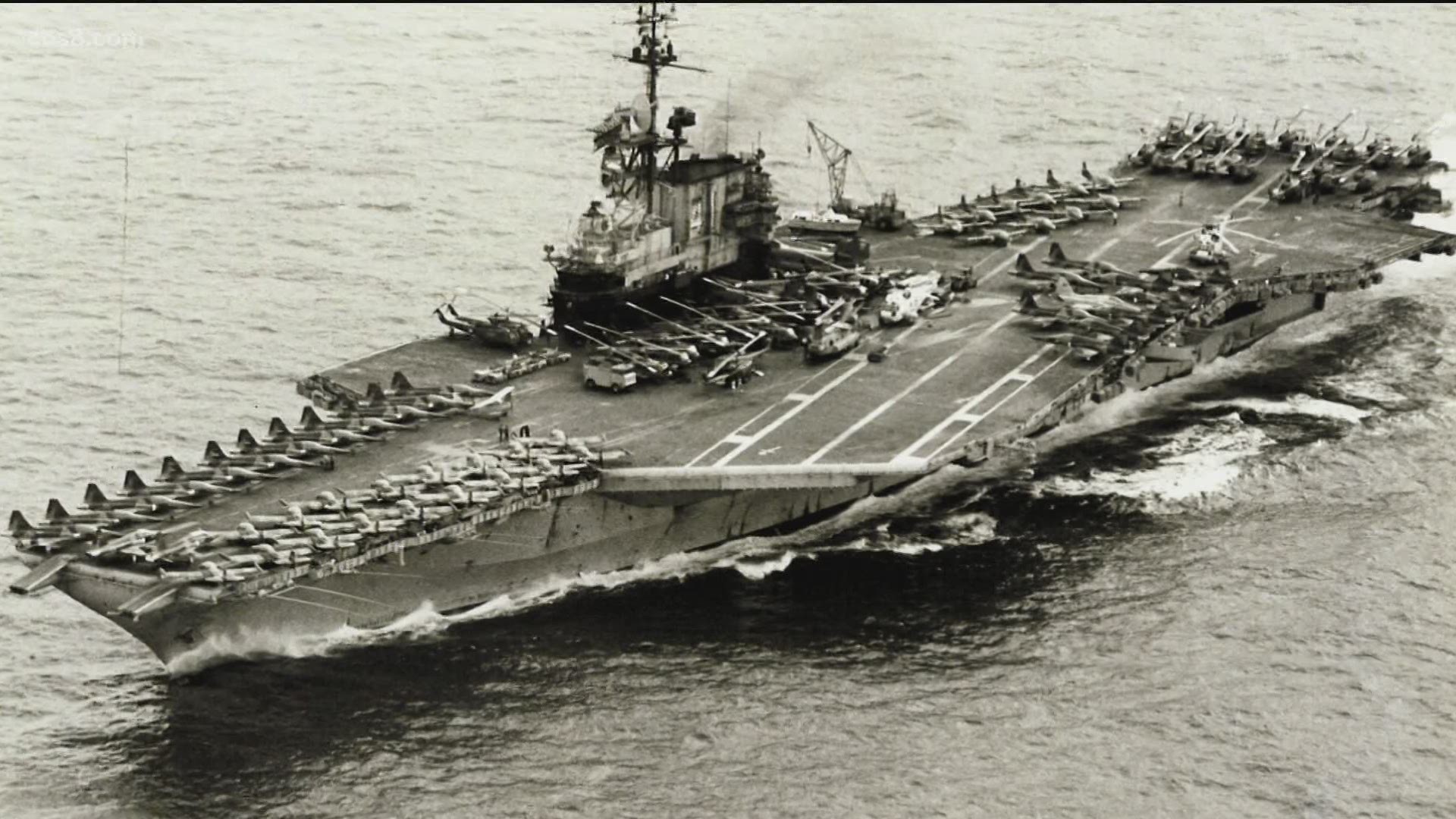 SAN DIEGO — As we honor our military veterans this month, we turn the spotlight on one of our hometown heroes, who was also one of the original TOPGUN instructors at Naval Air Station Miramar.

After that assignment, 88-year old Vernon Jumper served aboard the USS Midway, and it was there where he had the proudest moment of his career during the final days of the Vietnam War.

"To me it is, it is a miracle, because it was the most dangerous 30 hours I'd ever seen on an aircraft carrier," said Jumper as he reflected on his involvement in Operation Frequent Wind.

The intense rescue operation began on April 29, 1975, and lasted through the night, as a steady stream of helicopters filled with evacuees hovered above the aircraft carrier waiting to land. This was the final phase in the evacuation of American citizens and at-risk Vietnamese.

As Air Boss, Jumper was in charge of all flight operations on the ship.

"The chaos, the complications involved, were just tremendous," the retired Navy Commander recalled. "I was so frightened that one of these helicopters were so low on fuel, they might flame out and crash on this flight deck."

I interviewed Jumper from the very same tower where he called all the shots 45 years ago. His memories are still vivid.

"What did you see when you looked out from this perch right here?" I asked.

"When I looked out, the flight deck was covered in people and helicopters, of course. At one time, helicopters came up and they were hovering alongside the ship and they had less than five minutes of fuel remaining."

He was almost eye to eye with the pilots. At one point during the operation, he counted more than 20 South Vietnamese military aircraft circling above the ship.

The video from that operation shows some pilots hovered just long enough to unload passengers and then headed to the side of the ship, where they jumped out wearing life vests, careful to clear the rotors, as their helicopters crashed into the South China Sea.

"All of a sudden I saw this 01 Bird Dog," recalled Jumper, as he described the moment when he noticed a fixed-wing aircraft making passes over the carrier.

Jumper said the pilot dropped a note on the flight deck, but the wind blew it off the deck. He did it a few more times and the notes kept blowing over the side of the ship. Finally, the pilot circled again and dropped the note in a leather gun holster to keep it weighted down. The message said, "Can you mouve [sic] these Helicopter to the other side, I can land on your runway, I can fly 1 hour more, we have enough time to mouve. Please rescue me. Major Buang wife and 5 child."

"I immediately ran this note up to Captain Larry Chambers, our Commanding Officer at the time," said Jumper.

Chambers gave the go-ahead to clear the runway, and with no room on the deck, the crew pushed more than ten million dollars worth of helicopters over the side of the aircraft carrier, to allow Major Buang Ly to land his plane. He had never even seen an aircraft carrier and of course had never landed on one, but it was his only chance at survival.

"He made a beautiful carrier landing without a tailhook," Jumper said.

"I had the flight deck crew lined up to grab him before he went over the end, but he came to a stop 100 feet short."

The crew surrounded the family of seven as they exited the tiny plane and cheered. He says they were all so proud to be a part of an event that saved a family's life.

Major Buang Ly's story is just one of many whose lives were changed during Operation Frequent Wind.

"They're my heroes, they're always going to be my heroes," said Courtney Herrmann, who was only 8 years old and when she and her family of 12 stepped onto the USS Midway, along with her aunt and three cousins.

"They saved us, they saved thousands of people, people who now that have better lives," a grateful Herrmann reflected.

She remembers sleeping on the flight deck, because the space below was full, knowing they were finally safe.

Speaking to her on the very flight deck where she was rescued as a child, I asked her, "What does this flight deck mean to you?"

Herrmann knows, however, not everyone was able to leave. Through tears, she said, "My uncle that stayed back, he was tortured many years because of his military status. And had we stayed, the same thing would have happened to my family, because my father was a retired military officer."

Herrmann has deep gratitude for the US involvement in the unpopular war.

"If they weren't involved in the war, I wouldn't be sitting here on this deck, today."

Jumper says he'll never forget his fellow pilots and aircrewmen who paid the ultimate sacrifice. There's a board in Primary Flight Control (PRIFLY) where the names of those who served on the USS Midway and died during the Vietnam War are enshrined.

As he read some of the names, Jumper said, "I've flown with quite a few of these people. It's so sad to see their names on the board. They gave their lives for their country."

He takes comfort, however, in the success of the humanitarian mission he helped lead on the USS Midway, and to this day, strongly believes there was a higher power watching over them that day.

Jumper said at any one point, a helicopter could have crashed, resulting in mass casualties.

"I'm here to tell you, and I sincerely believe this. God was with us during those very dangerous hours and he kept us safe."

"It's the proudest moment of my life that we saved 3,073 souls, and nobody lost their lives."

Jumper now tells his story as a docent on the USS Midway Museum, which is currently open to the public in a limited capacity. He has logged more than 4,390 volunteer hours and is humbled that people who listen to his presentation often give him a round of applause and tell him how much they appreciate the story.

If you're lucky, you just may catch Jumper out there on a Monday or a Friday, sharing his first-hand account of Naval history.

Our News 8 family also wants to wish Jumper's wife, Rebecca, a happy birthday. She turned 95 years old this week. The two met on Coronado, and have been married for 63 years.