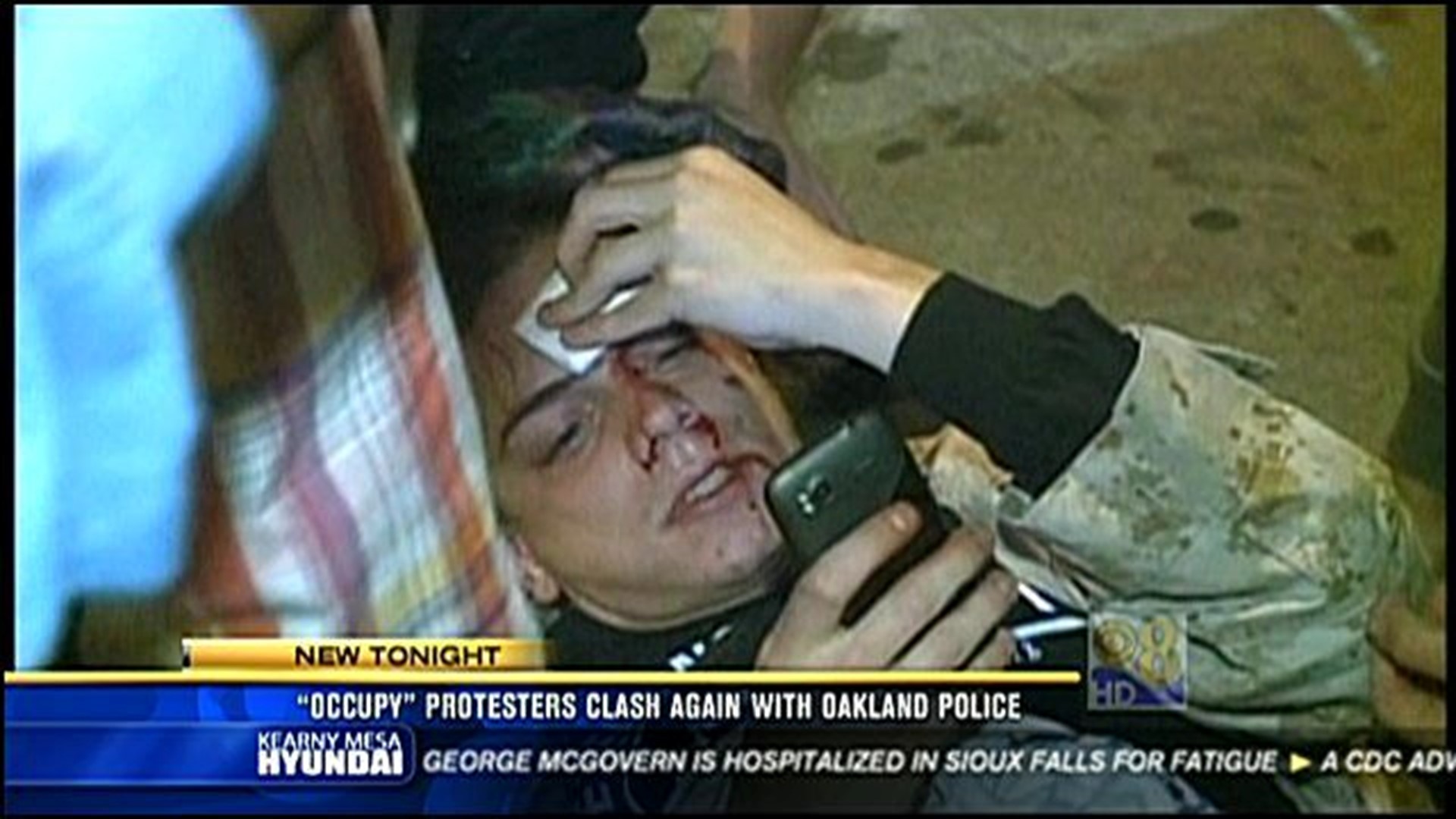 OAKLAND, Calif. (AP) — The scene was calm but tense early Wednesday as a crowd of hundreds of protesters dwindled to just a few dozen at the site of several clashes between authorities and supporters of the Occupy Wall Street movement a night earlier.

Police in riot gear stood watch only a few yards away from a group of stalwart demonstrators in the aftermath of skirmishes in front of City Hall that resulted in five volleys of tear gas from police, in blasts that seemed to intensify with each round, over a roughly three-hour stretch of evening scuffles.

The conflict began much earlier in the day when police dismantled an encampment of Occupy Wall Street protesters that had dominated a plaza across the street from the government building for more than two weeks.

Police fired tear gas and beanbag rounds, clearing out the makeshift city in less than an hour.

Hours after nightfall Tuesday evening, protesters had gathered at a downtown library and began marching toward City Hall in an attempt to re-establish a presence in the area of the disbanded camp.

They were met by police officers in riot gear. Several small skirmishes broke out and officers cleared the area by firing tear gas.

The scene repeated itself several times just a few blocks away in front of the plaza, where police set up behind metal barricades, preventing protesters from gaining access to the site.

Tensions would build as protesters edged ever closer to the police line and reach a breaking point with a demonstrator hurling a bottle or rock, prompting police to respond with another round of gas.

The chemical haze hung in the air for hours, new blasts clouding the air before the previous fog could dissipate.

The number of protesters diminished with each round of tear gas. Police estimated that there were roughly 1,000 demonstrators at the first clash following the march. About 200 remained after the final conflict around 11:15 PDT, mostly young adults, some riding bicycles, protecting themselves from the noxious fumes with bandanas and scarves wrapped around their faces.

Police have denied reports that they used flash bang canisters to help break up the crowds, saying the loud noises came from large firecrackers thrown at police by protesters.

Protesters moved about uneasily even as one used a bull horn to express his resolve.

"This movement is more than just the people versus the police," Mario Fernandez said. "It's about the people trying to have their rights to basic services."

Acting Police Chief Howard Jordan told reporters at a late night news conference that authorities had no other choice, saying the protesters were throwing rocks and bottles at officers.

"We had to deploy gas to stop the crowd," he said, according to a KCBS report.

City officials say that two officers were injured. At least five protesters were arrested and several others injured in the evening clashes.

In the morning raid authorities removed about 170 demonstrators who had been staying in the area overnight after repeatedly being warned that such a camp was illegal and they faced arrest by remaining. City officials said 97 people were arrested.

The Oakland site was among numerous camps that have sprung up around the country as protesters rally against what they see as corporate greed and a wide range of other economic issues. The protests have attracted a wide range of people, including college students looking for work and the homeless.

In Oakland, tensions between the city and protesters have been escalating since last week as officials complained about what they described as deteriorating safety, sanitation and health issues at the site of the dismantled camp.

This is the latest information. The previous story is below.

OAKLAND, Calif. (AP) — Under cover of darkness early Tuesday, hundreds of police swept into Oakland's Occupy Wall Street protest, firing tear gas and beanbag rounds before clearing out an encampment that demonstrators had hoped would stir a revolution.

In less than an hour, the two-week-old, miniature makeshift city was in ruins.

Protesters had stayed awake through the night, waiting for the expected raid. Officers and sheriff's deputies from across the San Francisco Bay area surrounded the plaza in front of City Hall at around 5 a.m. and closed in. Eighty-five people were arrested, mostly on suspicion of misdemeanor unlawful assembly and illegal camping, police said.

About 170 protesters were at the site, but no one was injured, Interim Oakland Police Chief Howard Jordan said at a news conference following the raid.

Television news footage showed protesters being taken away in plastic handcuffs without incident, though some protesters complained of rough handling by police.

Officers fired tear gas and bean bags when one group of demonstrators pelted officers with rocks and bottles near the camp's kitchen area, Jordan said.

"It was definitely chaos. People didn't want to get gassed," said protester Anthony Owens, 40, a computer programmer from Oakland who was at the scene when police moved in but was not arrested.

Some people in the camp left as word spread about possible police action, Owens said. Many of the remaining protesters locked arms and shouted as officers surrounded the plaza and moved in.

Witnesses reported seeing smoke rising from the area. The plaza was "contained" at around 5:30 a.m., city officials said.

By midmorning, city workers had started collecting the debris. Some would be held for protesters to reclaim, the rest would be thrown away, the city said.

The Oakland site was among numerous camps that have sprung up around the country, as protesters rally against what they see as corporate greed and a wide range of other economic issues. The protests have attracted a wide range of people, including college students looking for work and the homeless.

In Oakland, tensions between the city and protesters escalated last week as officials complained about what they described as deteriorating safety, sanitation and health issues at the site.

City officials had originally been supportive of protesters, with Oakland Mayor Jean Quan saying that sometimes "democracy is messy."

But the city later warned the protesters that they were breaking the law and couldn't stay in the encampment overnight. They cited concerns about rats, fire hazards, public urination and acts of violence at the site, which had grown to more than 150 tents and included areas for health care, child care and cooking.

"Many Oaklanders support the goals of the national Occupy Wall Street movement," Quan said in a statement on Tuesday. "However, over the last week it was apparent that neither the demonstrators nor the City could maintain safe or sanitary conditions or control the ongoing vandalism."

There were reports of a sex assault and a severe beating and fire and paramedics were denied access to the camp, according to city officials, who said they had also received numerous complaints of intimidating and threatening behavior.

Protesters disputed the city's claims about conditions at the camp. They said the protest was dominated by a spirit of cooperation that helped keep the site clean and allowed disputes to be resolved peacefully.

Lauren Richardson, a 24-year-old college student from Oakland, complained that the disheveled state of the camp following the police raid gave a false impression. She said volunteers collected garbage and recycling every six hours, that water was boiled before being used to wash dishes and that rats had infested the park long before the camp went up.

Volunteers at the medical tent erected on the site said paramedics had not been kept away.

On Thursday, the city ordered the protesters to vacate, though they did not set a deadline. Protesters said the number of people at the camp had steadily dwindled since the city posted the letter, while those who remained understood they would likely face a confrontation with police.

After Tuesday's raid, police maintained a heavy presence around downtown Oakland. Streets were closed off by police barricades, and at least two helicopters were in the air shining lights down. Dozens of officers were on the streets, and police in riot gear were seen facing off with shouting protesters, who briefly blocked traffic on a busy thoroughfare.

Police also cleared a smaller encampment from a park near the plaza on Tuesday morning.

The city said protesters would be allowed to return to the plaza after it was cleaned up and could stay between the hours of 6 a.m. and 10 p.m. but not overnight.

Many protesters said the raid had only served to strengthen their resolve that the protests would continue. A flier handed out along the police barricades at the edge of the plaza Tuesday morning asked Occupy Oakland demonstrators to reconvene at the city's public library in the afternoon.

In Sacramento, District Attorney Jan Scully said Monday she would not file charges against more than 70 protesters arrested while occupying the city's Cesar E. Chavez Plaza.

But The Sacramento Bee reports that city officials said they would still seek to prosecute the protesters for violating a city ordinance against loitering after curfew. Those cases would be handled by the city attorney's office rather than the district attorney.