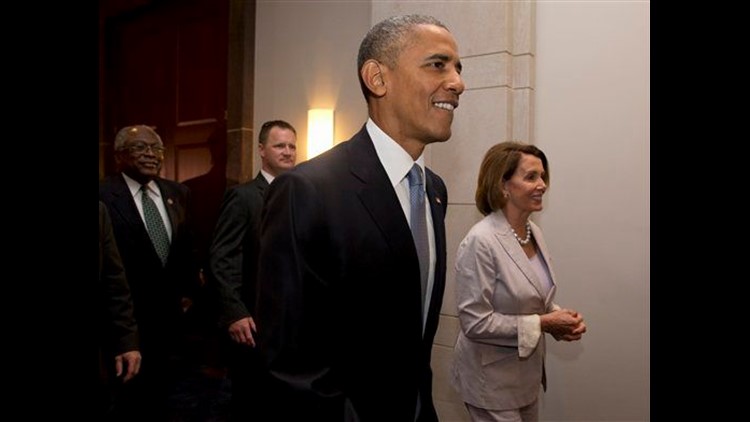 WASHINGTON (AP) — President Barack Obama made an unusual, personal 11th-hour appeal to dubious Democrats on Friday in a tense run-up to a House vote on legislation to strengthen his hand in global tradetalks.

Cheers greeted the president as he strode into a meeting that could make or break a key second-term priority. But it was converts he needed to assure success of a bill to let him complete global trade deals that Congress could approve or reject, but not change.

But when asked on his way back to the White House if he had nailed down the support he sought, Obamareplied cryptically. "I don't think you ever nail anything down around here. It's always moving," he said.

The president's hastily scheduled trip to the Capitol coincided with the beginning of debate on the House floor.

"Is America going to shape the global economy, or is it going to shape us?" said Rep. Paul Ryan, the Wisconsin Republican who is head of the House Ways and Means Committee and a GOP pointman on an issue that scrambled the normal party alignment in divided government.

But Rep. Sander Levin, D-Mich., countered that the legislation heading toward a showdown vote included "no meaningful protections whatever against currency manipulation" by some of America's trading partners, whose actions he said have "ruined millions of middle class jobs."

The president's last-minute visit to Capitol Hill marked a bid to stave off a humiliating defeat at the hands of his own party. He met privately first with Rep. Nancy Pelosi of California, the House Democratic leader who remained publicly uncommitted on the measure.

Other presidents have had the authority Obama seeks, which is dubbed "fast track." The White House wants the legislation as it works to wrap up a round of talks with 11 Pacific Area countries.

The same measure included a renewal of assistance for workers who lose their jobs as a result of globaltrade. Normally, that is a Democratic priority, but in this case, Levin and other opponents of the measure mounted an effort to kill the aid package, as a way of toppling the entire bill.

The move caught the GOP off-guard. House Republicans, already in the awkward position of allying themselves with Obama, found themselves being asked by their leaders to vote for a worker retraining program that most have long opposed as wasteful. Many were reluctant to do so, leaving the fate of the entire package up in the air, and Obama facing the prospect of a brutal loss — unless he can eke out what all predict would be the narrowest of wins.

"If we have to pass something that's a Democratic ideal with all Republicans to get the whole thing to go," said Rep. Tom Rooney, R-Fla., "we could be in trouble."

Business groups like the Chamber of Commerce crave the deal; labor unions are ardently opposed, pointing to job and wage losses from earlier trade pacts opponents say never lived up to the hype from previous administrations.

Those colliding interests have produced unusual alliances on Capitol Hill, with House Republicans working to help a president they oppose on nearly every other issue, and most Democrats working against him.

Yet in a convoluted series of events Thursday, the fast-track bill, long the main event, seemed to fade in importance even as Republicans began sounding confident it would command enough votes to pass. Instead, Democrats began eyeing the possibility of taking down the related Trade Adjustment Assistance bill — a maneuver that would be made possible only because of rules in place for House debate.

Republicans said that the sequencing was determined at Pelosi's behest. She has worked behind the scenes with House Speaker John Boehner, R-Ohio, this week to solve a last-minute hang-up involving Democratic concerns about cutting Medicare funds to pay for worker retraining.

"The TAA is the handmaiden to facilitate the whole deal," said Rep. Peter DeFazio, D-Ore. "We have the potential to stop this whole train."

Friday's outcome appears to depend on how many Democrats defect on the trade adjustment bill — and whether Republicans can make up their numbers. The biggest questions hanging over the House late Thursday were: How many of the 188 Democrats will vote against TAA because it's the best way to kill fast track? And how many of the 246 Republicans might hold their noses and vote for the jobs program in a bid to save fast track?

The trade issue's divisiveness was evident when the House voted narrowly, 217-212, on a procedure Thursday to advance the package to Friday's expected showdown.

The White House, recognizing the precarious position the package is in, dispatched top officials to Capitol Hill Thursday to meet with Democrats, and Obama himself made a surprise appearance at Thursday night's annual congressional baseball game. Arriving as Democratic and Republican lawmakers faced off at Nationals Park, Obama was greeted with chants of "TPA! TPA!" from the GOP side — the acronym for the TradePromotion Authority fast track bill.