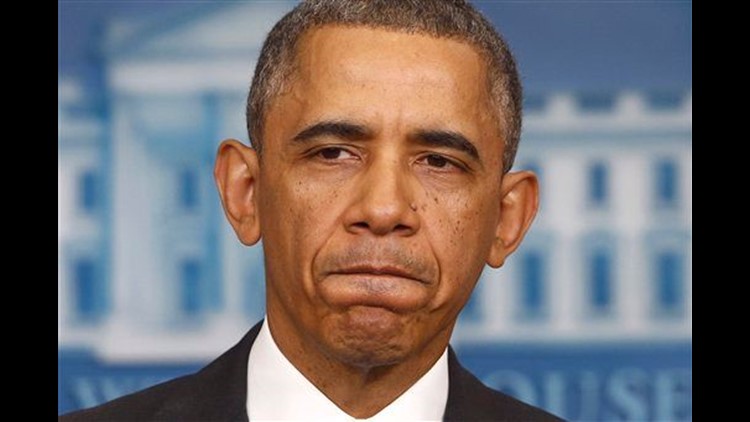 WASHINGTON (AP) — It was a moment for Barack Obama to savor.

His second inaugural address over, Obama paused as he strode from the podium last January, turning back for one last glance across the expanse of the National Mall, where a supportive throng stood in the winter chill to witness the launch of his new term.

"I want to take a look, one more time," Obama said quietly. "I'm not going to see this again."

There was so much Obama could not — or did not — see then, as he opened his second term with a confident call to arms and an expansive liberal agenda.

He'd never heard of Edward Snowden, who would lay bare the government's massive surveillance program. Large-scale use of chemical weapons in Syria was only a threat. A government shutdown and second debt crisis seemed improbable. His health care law, the signature achievement of his presidency, seemed poised to make the leap from theory to reality.

Obama had campaigned for re-election on the hope that a second term would bring with it a new spirit of compromise after years of partisan rancor on Capitol Hill.

"My expectation is that there will be some popping of the blister after this election, because it will have been such a stark choice," he'd said.

Instead, great expectations disappeared in fumbles and failures.

Obama's critics doubled down. Fractured Republicans, tugged to the right by the tea party, swore off compromise. The president's outreach to Congress was somewhere between lacking and non-existent. Obama's team dropped the ball — calamitously — on his health care law. Snowden's revelations had Democrats and Republicans alike calling for tighter surveillance rules. Foreign leaders were in a huff — Brazil's president snubbing the offer of a White House state dinner, Germany's Angela Merkel incensed that her cell phone calls had been intercepted. The president's misplaced pledge that people who liked their health plans would be able to keep them ran into a harsh reality as millions saw their coverage canceled.

The year ended with a small-bore budget deal that was welcomed as breath of fresh air, a telling sign of how wildly things had veered off course in 2013.

White House communications director Jennifer Palmieri called it a year of "fits and starts" for the president — and predicted better days ahead.

"We'll probably come out of 2013 in better shape in terms of Congress and the White House being able to function together," she said.

Yet Obama's agenda of gun control, immigration reform, a grand budget bargain and more sits unfulfilled. Obama's job approval and personal favorability ratings are near the lowest point of his presidency, with increasing numbers of Americans saying they no longer consider him to be honest or trustworthy. Abroad, too, positive views of Obama have slipped, with confidence in him doing the right thing in world affairs dropping.

The mantra for the Obama White House has always been to take the long view. Officials scoff at the "who's up, who's down" churn of Washington's chattering class and recall with glee Obama's ability to rebound from moments in his first term when his presidency was declared in peril.

But as Obama embarked on his second term, some of his closest outside advisers warned him that the next four years would have to be different: He was operating on a shorter leash, and might have just 18 months, perhaps as little as a year, to accomplish big domestic priorities.

All Obama needed to do was look to his predecessors to see how quickly trouble can consume a second term. Richard Nixon resigned. Ronald Reagan got ensnarled in the Iran-Contra affair. Bill Clinton was impeached for lying about his dalliances with Monica Lewinsky. And George W. Bush lost the public's trust through his botched handling of Hurricane Katrina's aftermath and the unpopular Iraq War.

Obama's team thought it had a strategy for overcoming the second-term curse. They would make a quick play for stricter gun control measures, then capitalize on the GOP's post-election anxiety by pressing for an immigration overhaul and floating the possibility of a big budget deal.

Each of those efforts failed and Obama quickly found himself consumed by an unending series of distractions.

Some were fleeting, like the revelations that the Internal Revenue Service was applying extra scrutiny to conservative groups. But others threatened long-term damage to his presidency: the National Security Agency disclosures and the disastrous rollout of the "Obamacare" health law.

Some events were beyond Obama's control and his frustration with them was evident when he fumed in September, during the crisis over Syria: "I would much rather spend my time talking about how to make sure every 3- and 4-year-old gets a good education than I would spending time thinking about how I can prevent 3- and 4-year-olds from being subjected to chemical weapons and nerve gas."

But presidents don't get to pick their crises. And plenty of Obama's woes were of his own making, raising questions about his competence and management of the White House.

How could he not have known that his government was spying on the private communications of friendly world leaders? Why didn't he know his health care website wouldn't work? How could he have promised over and over again that Americans could keep their health insurance if they liked it when his own advisers knew it wasn't that simple?

As a result, the president is ending his fifth year in office in a "defensive crouch," says presidential historian Douglas Brinkley, and may have to be content with simply protecting his health care law and other Democratic-backed programs that Republicans are eager to repeal.

At this point, says Brinkley, "it's really a firewall presidency."

The 2014 midterm elections give Obama his best opportunity to rebound. But Democrats, who just weeks ago saw an opportunity to retake the House after Republicans got blamed for the government shutdown, now fret about the health care law's ongoing problems and may be content to just keep control of the Senate.

There's a certain irony in Obama's success depending on Congress, a body with whom he has had a lukewarm partnership.

Lawmakers from both parties say Obama doesn't talk to them much, nor do his aides. Letters go unanswered. Policies come out of the blue. Social interactions are few.

Both sides wistfully recall the voluble Clinton, who figured out how to craft deals with Republicans on welfare reform and other agenda items after the GOP took control of the House and made big gains in the Senate two years into his presidency.

Sen. Tom Coburn, an Oklahoma Republican who worked with Obama when he was a senator and still considers the president a friend, says flatly: "He's flunked in terms of relations with Congress."

"If you know him personally, he's a very likable person," says Coburn. "But it's different than with most other presidents in terms of having relationships with Congress. ... There's a lack of a personal touch."

Of course, the president's tepid relationship with Congress is hardly his fault alone. The tea party forces that pulled House Republicans to the right in recent years made it difficult for the GOP to reach agreement with Democrats on much of anything, and produced the showdown over the president's health care law that spawned the government shutdown.

Obama did attempt to improve relations with Republicans earlier this year, holding a few dinners with GOP lawmakers. His chief of staff, Denis McDonough, has been widely praised by Republicans for being a frequent visitor to Capitol Hill.

But some lawmakers say that's as far as the outreach goes. Sen. John McCain, the Arizona Republican who ran against Obama in 2008 but has since tried to work with him on immigration and the budget, said no one from the White House legislative affairs staff has ever called him or come to his office just to chat.

What does it matter if Obama doesn't buddy up to his former colleagues?

He needs those relationships to advance his agenda in Congress. And the strained ties with legislators are emblematic of a broader problem for Obama rooted in his tendency to keep a tight inner circle.

"Instead of going out and talking to his enemies, making friends and schmoozing, or banging heads together with them or whatever, you can see that the man is diffident — deeply, deeply diffident about the kinds of politicking that are necessary to build consensus," says Nigel Nicholson, a professor at the London Business School who has written a book about leadership in which Obama is a frequent topic.

The president has been getting plenty of that kind of advice in recent weeks. Critics called for a sweeping shakeup of his White House inner circle. Even his allies called for someone — anyone — to be fired for the health care failures.

Obama has responded in his typically restrained fashion. No one has lost a job over the massive health care screw-up, though the White House hasn't ruled that out. And while the president is doing some minor shuffling in the West Wing, he's largely bringing in people he already knows.

To critics, the limited staff changes smack of a White House that doesn't fully understand the depths of its problems. But presidential friend Ron Kirk said they are indicative of Obama's "fairly dispassionate temperament," which allows him to hold steady in the face of adversity.

"He understands that overreacting to any one development in the moment is not the best way to achieve a long-term and stable objective," said Kirk, who served as U.S. trade representative in Obama's first term.

The president's agenda for his sixth year in office is a stark reminder of how little he accomplished in 2013.

Obama plans to make another run at immigration reform. He'll seek to increase the minimum wage and expand access to early childhood education, proposals he first outlined in his 2013 State of the Union address. And he'll look to implement key elements of the climate change speech he delivered earlier this year, many of which are stagnant.

Foreign policy could be an oasis for the struggling second-term president. With Russia's help, he turned his public indecision over attacking Syria into an unexpected agreement to strip President Bashar Assad of his chemical weapons, though the success of the effort won't be known for some time and the civil war in Syria rages on. Obama also authorized daring secret negotiations with Iran, resulting in an interim nuclear agreement. But even the president says the prospects of getting a final deal are only 50-50.

In a year-end news conference, the president optimistically predicted that 2014 would be "a breakthrough year for America."

But Obama's dismal standings in the polls suggest he can't count on a public groundswell to propel his agenda. The heady days of 2009 when aides boasted of Obama as "the best brand on earth" are long gone.

"We all wear thin with the American people after a while," says McCain, though he warns against counting out any president with three years left to govern — particularly this one.

"To count a man of that talent out at this point in time in his administration would be a huge mistake," he says.